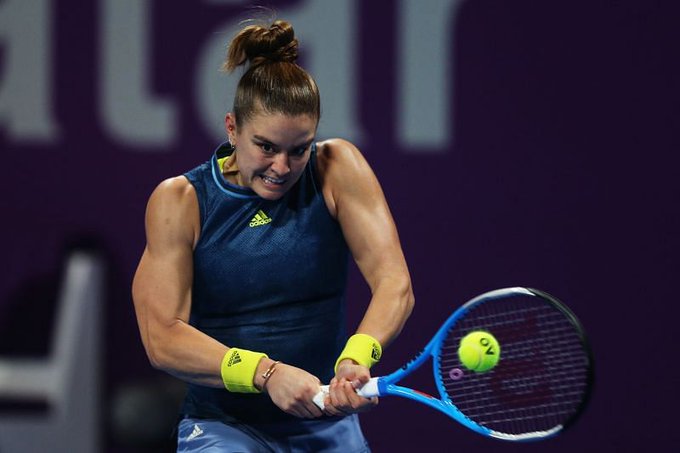 Maria Sakkari has powered her way into the semi-finals of the Miami Open after a 6-0 6-4 victory over Naomi Osaka.

Sakkari broke on five occasions as she beat a very poor Naomi Osaka, who’s first serve percentage was at 41%.

It means Ash Barty will stay as world number one after Osaka failed to win the title.

Next for Sakkari is Bianca Andreescu or Sara Sorribes Tormo in the last four.

It was a fierce start from Sakkari as she was the aggressor from the beginning especially on return.

After going 40-0 down, Sakkari won five points in a row to claim the first break.

The Greek wasn’t done there as she continued to pile the pressure on the world number two as she served accurately and with purpose while hitting her returns with intensity and depth.

As for Osaka an 11% first serve percentage after her first two games showed underwhelming start to the contest as she looked nervy and lacklustre.

Sakkari continued the momentum as she handed Osaka her first bagel for four years as she took the opening set in 24 minutes.

However the attitude of Sakkari did not drop as she was determined to claw back the disadvantage through angles and good variety in her game.

There was no clinical edge about Osaka today as she had not really dictated points against the Greek.

Eventually getting the break back, Sakkari would do what she did in the first game of the match in the ninth game of the second set as she won five points in a row to give her a chance to seal one of the best wins of her career.

Sakkari made no mistake as she booked her place in the semi-finals and ended the 23 match winning streak of Osaka, who will not be world number one after the Miami Open.

The Greek will now play Bianca Andreescu or Sara Sorribes Tormo tomorrow for a place in the final.