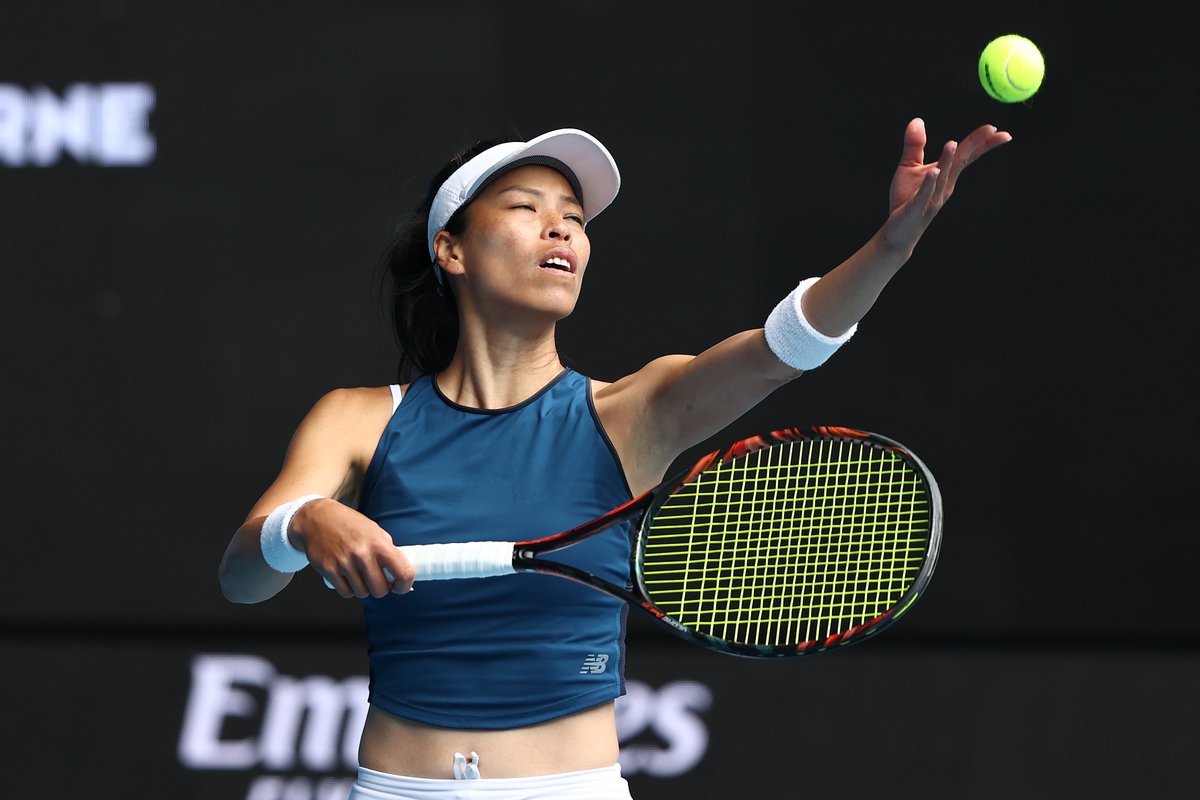 Players hitting both their forehand and backhand holding the racquet with two hands have quite a history in tennis.

The queen of those that could be defined as “quadruple-handed players” is the great Monica Seles, a nine-time Slam champion, then we had Marion Bartoli, who won Wimbledon in 2012, and today we can find Luksika Kumkhum and Georgia Brescia among active WTA players. The current coach of Milos Raonic, Fabrice Santoro, was an example of these peculiar kinds of players in the ATP Tour. All of them have a common technique: on their “natural” backhand side, that is the left side for the right-handed, they hit a normal two-handed shot. On their forehand side, they just hit a double-handed shot with their hands inverted on the racquet’s handle, meaning that their dominant hand never moved from the handle’s base.

To swing their sticks this way, they had to wrap their forearms one above the other (see Monica Seles’s FH pic), and while this is  quite a complex move, the big advantage is that they don’t have to move their hands, never leaving the grip. Considering the speed and pace of modern tennis rallies, this is very important.

Su-Wei Hsieh, 35-years-old from Taipei, has been n.1 WTA in doubles, and in the last years has had a great run in singles too, reaching a best ranking of n.23, and beating big names like Muguruza, Kerber, Pliskova, Halep and Osaka among the others, and now Bianca Andreescu. She plays “quadruple-handed”, but with a unique feature: on both her right and left side, she just plays an absolutely standard two-handed backhand, and this is something almost never seen before in tennis, surely not at top professional levels. How does she change her grip on the racquet fast enough to compete and win against such heavy-hitting opponents as those she faces on tour? Let’s see a brief practice video of Hsieh from Indian Wells, and comment on it.

As you can see, Su-Wei uses a customized racquet, with a handle slightly longer than the standard, and places her dominant hand (she is right-handed) approximately in the middle of the handle. Then, she moves her left hand over or under the right one depending on which side she is swinging to hit. She also adjusts her right hand position and grip a little, moving it down on her left swing, and the result is a couple of almost perfect two-handed backhands, with the normal continental and eastern grip combination. What’s extraordinary about Hsieh is the speed and precision of her racquet handling, like a juggler of sorts, absolutely fascinating when you realize the difficulty of such a fine and instantaneous adjustment. Playing this way, Su-Wei is able to hide the direction of her shots till the last moment, often fooling her opponents, and she is an amazing counter-puncher, almost impossible to be put into trouble just by hard hitting. Something many top-level WTA players have learned at their expense.

Hsieh will play Naomi Osaka in the quarter-finals of the Australian Open on Tuesday. She is coached on the Tour by Paul McNamee who is a former top 30 player himself and Australian Open semifinalist in 1982. McNamee, junior champion at the AO 1983 has won 24 doubles titles, including 4 Slams. Together with Peter McNamara twice the doubles in Wimbledon, 1980 and 1982, with Mark Edmondson 1983 the Australian Open. He won also a mixed double with Martina Navratilova in 1985 at Wimbledon. Paul McNamee was also a member of the Australian team that won the Davis Cup in 1983 and 1986. In singles, he won 2 tournaments beating in the finals Stan Smith (Palm Harbor 1980) and Guillermo Vilas (Baltimore WCT 1982) in 5 sets. Played 5 finals, losing to players like Lendl, Cash, Emilio Sanchez. McNamee played a key role in the founding of the Hopman Cup international tennis tournament in 1988. He served as tournament director of the Hopman Cup and CEO of the Australian Open until 2006.

Related Topics:Su-Wei Hsieh
Up Next