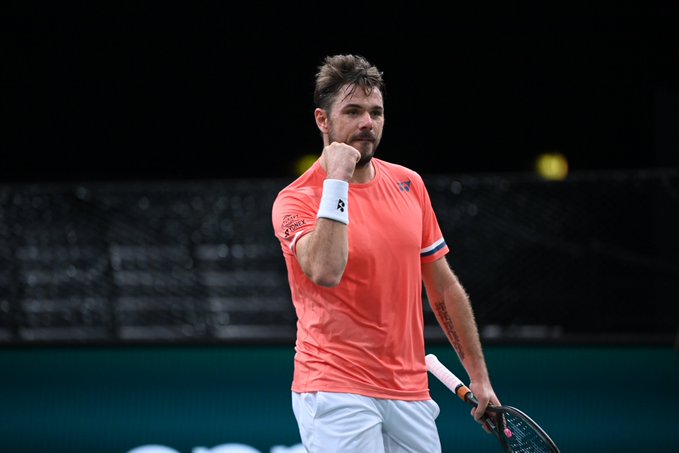 Three-time Grand Slam champion Stan Wawrinka came back from one set point in his 4-6 6-3 6-1 win over Mikhail Kukushkin after 1 hour and 56 minutes in his opening match at the Murray River Open in Melbourne. Wawrinka leads 3-2 in his five head-to-head matches against Kukushkin.

Wawrinka fended off four of the five break points he faced and won 81 % of his first serve points.

Wawrinka broke once in the sixth game to take a 4-2 lead forcing the match to the decisive set. The Swiss player broke three times to cruise through to a 6-1 win in the third set.

“I was not playing my best tennis at the beginning. I was pushing the ball a bit too much, but I started to play a bit better, so I tried to be a bit more aggressive. I am happy with my match, but it was not easy. I am reaching my best form step by step”, said Wawrinka.

Wawrinka set up a second round match against Australia’s Alex Bolt, who battled past US Mackenzie McDonald 6-4 6-7 (7-9) 7-5 after 2 hours and 29 minutes.

Grigor Dimitrov dropped six of his first-service points in a 6-3 6-3 win over Andrew Harris setting up a match against Alexei Popyrin.

Felix Auger Aliassime fired 12 aces and won 27 of his 31 first service points in his 6-3 6-1 win over Andrew Harris booking his spot in his next round, where he will face Egor Gerasimov.

Australia’s James Duckworth edged past France’s Ugo Humbert 7-6 (8-6) 6-4. Great Britain’s Daniel Evans defeated Portugal’s Pedro Sousa 6-3 7-5 to secure his spot in the second round, where he will face US Marcos Giron, who beat France’s Adrian Mannarino 6-3 6-4.