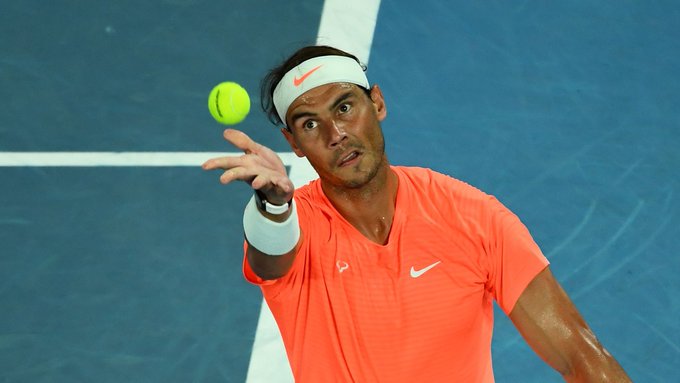 Rafael Nadal has revealed that his back injury is improving after reaching the last 16 at the Australian Open with a 7-5 6-2 7-5 win over Cameron Norrie.

The Spaniard didn’t have it all his own way on an empty Rod Laver Arena as he overcame tight opening and final sets to overcome the powerful Brit.

After recovering from a break down in the first set, Nadal increased the intensity and started to dictate play.

Once he found his rythym, there was no danger of him losing the match even if Norrie managed to outpower the Spaniard on several occasions.

Victory was sealed in 2 hours and 15 minutes as he sealed his place in the second week of the first grand slam of the year.

However the most positive piece of news wasn’t his victory, it was the information he revealed after the match concerning his back injury.

In his press conference, the 20-time grand slam champion revealed that today is the first time his back injury has improved, “First day I feel an improvement, and that’s the most important thing for me today, more than
any other thing,” the Spaniard said on Saturday night.

“Today is the first day that I started to serve again my normal serve. But yesterday I didn’t practice, so today just warming up with the new, with the normal movement. So of course I didn’t serve bad, but I can do better, I think.

“Have been an important victory for me. The biggest victory is the back is better for the first day. So that’s the most important thing.”

This is good from a Nadal perspective as he looks to make history by winning a record-breaking 21st grand slam.

Also with Novak Djokovic having his own injury issues, the Spaniard will believe that if his back continues to improve then he is firm favourite to lift the trophy next Sunday.

On Monday, Nadal will play Fabio Fognini after the Italian stormed past Alex De Minaur 6-4 6-3 6-4 in just over two hours.

Nadal more than anyone on the tour knows how dangerous the Italian after losing to him from 2 sets to love up at the US Open six years ago.

However the Spaniard says he relishes the challenge, “When he’s playing well, he’s one of the most dangerous opponents on tour without a doubt, no?”

“Today he had an amazing victory against a great opponent, so will be a
very tough match. But I hope to be ready for it.”

Related Topics:australian openRafael Nadal
Up Next