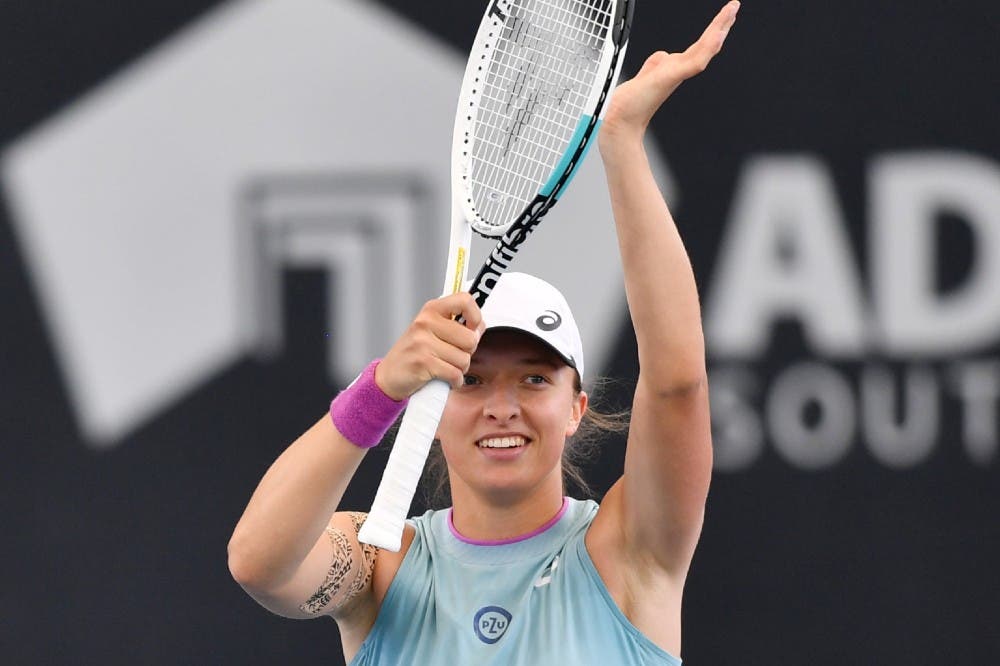 Last year’s Roland Garros champion Iga Swiatek clinched the second title of her career at the Adelaide International with a 6-2 6-2 win over Belinda Bencic after 62 minutes.

Iga Swiatek hit 22 winners to 6 unforced errors. The Polish 19-year-old star won 90% of her first serve points and was not taken to deuce in any of her service games. Bencic hit 5 aces, but she made eight double faults.

Both players traded holds in first four games, but Swiatek reeled off 10 of the next 12 games from 2-2 to close out the match after 67 minutes.

Swiatek earned her first break in the sixth game to 30, as Bencic made three double faults. The Pole converted her second break point after five deuces in the eighth game to close out the first set 6-2.

Swiatek went up a double break in the fourth and eighth games to clinch the second set 6-2.

Swiatek did not drop a set in five matches and lost just 22 games all week, not even losing more than four games in any set, just like at last year’s Roland Garros, where she won her first Grand Slam title without dropping a set or more than five games to any opponent. The 28 games she lost in total were tied for the second-fewest among French Open singles champions in the Open Era behind only the 20 games Steffi Graf lost in 1988. In the French Open she beat Simona Halep and Sofia Kenin en route to her maiden Grand Slam title.

Swiatek has extended her record in professional finals to 9-1, including 7-0 in ITF level finals. She lost only to Polona Hercog in Lugano in 2019.

Swiatek has improved to 18-5 since the WTA Tour’s resumption last summer and has won 16 of those wins in straight sets. She has extended her lifetime record against top 20 players to 20-5 and to 2-1 lifetime record in finals.

Bencic reached the 11th final of her career and the first since 2019. The Swiss player has a 4-7 lifetime record in finals. She last lifted a WTA title in Moscow 2019.

“After all I think it was a really positive week. I did not expect to reach the final here. I think we did a good bit of work coming from how I played in the Australian Open, and before that to coming here. So I definitely feel much more comfortable on the court. I want to take this momentum into the next tournaments, kind of take this like a bit of a boost”, said Bencic.

Number 3 seeds Alexa Guarachi from Chile and Desirae Krawczyk from the USA beat Hayley Carter and Luisa Stefani 6-7 (4-7) 6-3 10-3 in the doubles final. Guarachi and Krawczyk have claimed their third WTA Tour doubles title as a team following Gstaad 2018 and Istanbul 2020. They reached the final last year.