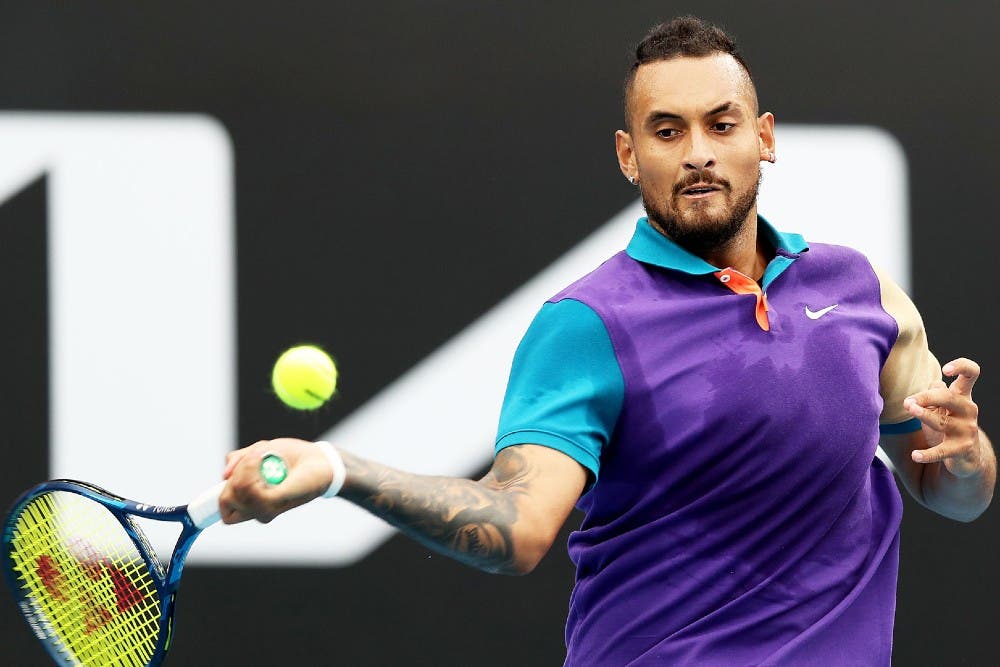 Nick Kyrgios says there is a ‘massive question mark’ concerning his ability to play at next week’s Australian Open after crashing out of the Murray River Open on Friday.

The former top 20 star vented his anger throughout his 6-3, 6-4, loss to Borna Coric in Melbourne Park where he received two code violations. Frustration was building up for the Australian throughout the match as he struggled with a left knee injury which required medical treatment at the end of the first set. This week is the first time Kyrgios has played a competitive match in almost a year.

Bothered by yet another physical issue, the world No.47 reached boiling point during the second set when he was broken by Coric. After receiving a code violation for swearing, he received another penalty after smashing his racket and throwing it into the stands. Something that the Australian has previously done before on the Tour.

Controversial antics aside, there is real concern that Kyrgios’ body may not be able to hold up next week at the Australian Open where it is possible that he might have to play a five-set match. He has been drawn to play No.184 Frederico Ferreira Silva in the first round and could possibly play Dominic Thiem in the third if both reach that stage of the tournament.

“I was going through some pain during last year,” Kyrgios told reporters about his knee. “I’ve always had kind of knee issues, especially my left knee. It was something that was pretty serious. I’d rather not talk about it.
“I mean, I did everything I could to get it better, to get it able to play. I’m lucky that I’m healthy enough to play.
“There’s a massive question mark for me [to play three or five sets] even if I was completely healthy, not playing in a year. It’s not easy to turn around and prepare for such an event just like that. It’s not like a tap.”

It is not entirely clear as to what the exact issue Kyrgios is facing and some have suggested that he had some sort of procedure on his knee in recent months. However, this hasn’t been officially confirmed.

Another issue Kyrgios has to contend with next week is a reduction in the crowd due to protocols related to the COVID-19 pandemic. At present it is expected that the Australian Open is set to welcome up to 50% of its usual situation. Although it is possible that the number could change if there are any positive cases in the region.

“Yeah, I mean, it’s a tough thing to talk about. At the end of the day it’s a tennis match,” he said.
“With everything going on, it really shouldn’t matter to be honest. Yeah, of course it’s going to be tough. If I’m down two sets to love, I’ve been down like that before and come back and won. If there’s no crowd that day, I’m probably not going to win.”

Kyrgios has won six ATP titles so far in his career.