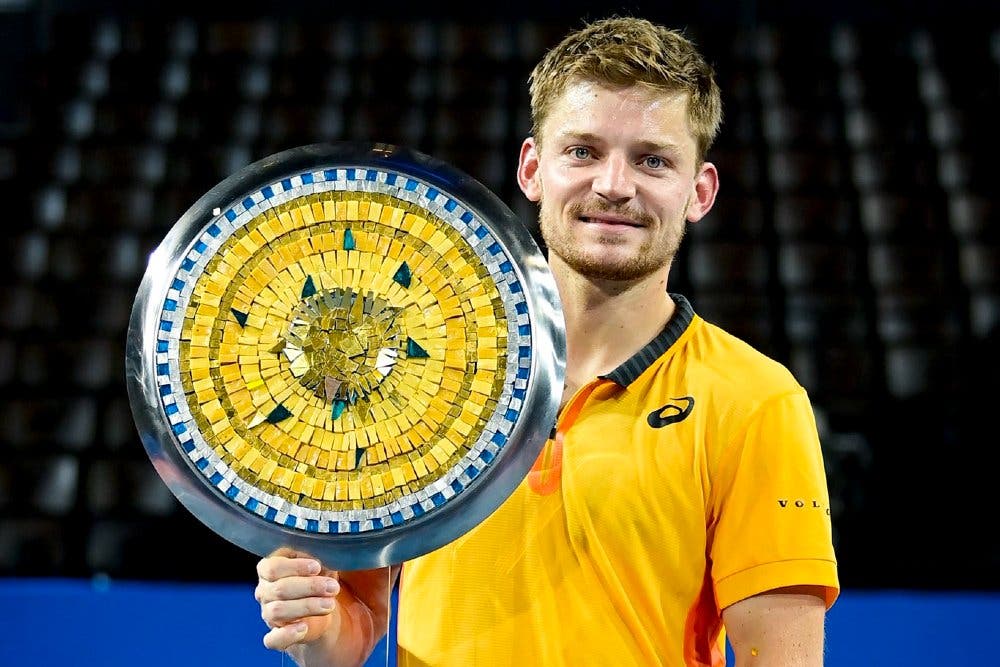 Goffin fought back from one set down to win the first title since Tokyo in 2017. The Belgian beat Bautista Agut for the fourth consecutive time in six head-to-head matches improving his record in finals to 5 wins to 9 defeats.

For the first time in history the top two seeds met in the Montpellier final.

Goffin fired 13 aces and saved four of the six break points he faced.

Goffin broke back in the ninth game for 4-5 with an inside-in forehand and held his serve with his fourth ace at deuce to draw level to 5-5. Goffin faced two set points at 5-6 with a double fault and a forehand error, as he was serving at 5-6.

Bautista Agut dictated the rallies with his forehand to convert his second set point on Goffin’s serve in the 12th game to win the first set 7-5 after 49 minutes.

Goffin earned an immediate break at love with  a backhand winner down the line in the first game of the second set. The Belgian player held serve for 4-2 with an ace. He served out the second set at love with two aces to force the match to the decider.

Goffin drew a pair of forehand errors from Bautista Agut to get an early break in the first game on his third opportunity. The Belgian player saved three break points to hold his serve at deuce for 2-0 with a forehand down the line. The 2017 ATP Finals runner-up earned a double break to build up a 5-2 lead. Goffin converted his first championship point with a backhand down the line after 2 hours and 5 minutes.

“It’s never easy to win tournaments. This is my fifth. Every tournament that I won was very special. I had some opportunities. I had matches where I had zero chance to win in the final, but sometimes you take it sometimes not. You need to continue. You need to improve your game. You need to fight and I am happy it pays off at the end. A final is always different. You have to just go for it. You made already a good week. It’s the last match of the week. So you have to give everything to try to win the trophy. Otherwise it’s tought to win  a tournament. I think I did it. I raised my level. I am really happy at the end because it was a tough moment. The last season was tough. I am happy I am back with a level like this. It would have been nice o win this title in front of fans. This win gives me the motivation to return stronger, when the crowd will return. Roberto played really well and I always that he is a very tough opponent. He is one of the biggest fighters and one of the best players especially in the final. I had to play my best best tennis and I think it was the case from the end of the first set”, said Goffin.

Bautista Agut, who did not drop a set en route to the final, was bidding to win his 10th ATP Tour title. He has a 9-8 record in ATP title matches.

“I think he played very good tennis today. I fought, but it was not enough and I am very happ for him to win the title”, said Bautista Agut.

Top seeds Edouard Roger Vasselin from France and Henri Kontinen clinched their second doubles title as a team with a 6-2 7-5 win over Jonathan Erlich and Andrei Vasilevski after 66 minutes.

Roger Vasselin and Kontinen fended off seven break points they faced to win their second career title after their triumph at the 2019 Stockolm Open.

The French and Finnish doubles team dropped just one set en route to the Montpellier ATP 250 title, when they came back from a set down in their 6-7 (5-7) 6-2 10-8 win over Hubert Hurkacz and Szymon Walkow.

Roger Vasselin becomes the first player to win three doubles title in Montpellier. The French doubles specialist lifted his previous title in the home tournament alongside Nicolas Mahut in 2012 and Ivan Dodig in 2019.

“We are happy the tournament this week. We were better and better. In each match. That is a good point. Now we are looking forward to the rest of the season”, said Roger Vasselin.