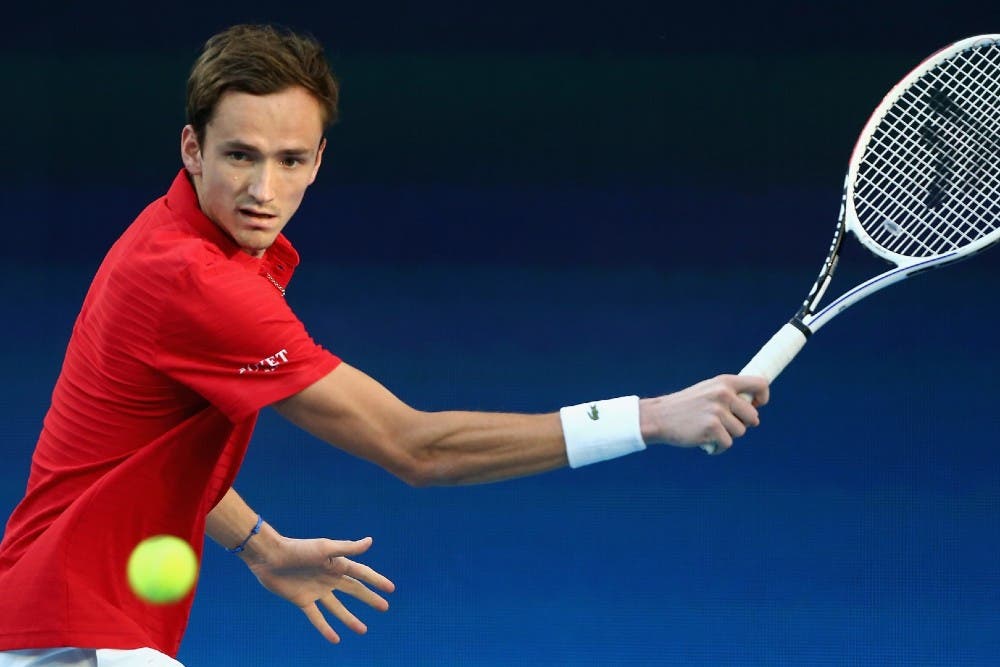 Last year’s ATP Finals champin Danil Medvedev booked a spot for the Russian team in the ATP Cup semifinal for the second consecuive year with a 6-2 6-4 win over 2014 US Open finalist Kei Nishikori.

Medvedev’s win moved Russia to 2-0 in the tie against Japan after Andrey Rublev eased past Yoshihito Nishioka 6-1 6-3 in 64 minutes.

Rublev and Medvedev have not dropped a set at this tournament this week.

In the first match Rublev hit 21 winners to 17 unforced errors. Nishioka started the match with an early break after Rublev lost five consecutive points fom 40-0 in the first game.

Rublev forced an error from Nishoka in the second game to break straight back and hit a backhand winner in the third game to take a 2-1 lead. Rublev broke again with a forehand winner to race out to a 5-1 lead. The Russian star hit a service winner to closed out the first set 6-1 with six consecutive winning games.

Nishioka missed a volley at the net to drop serve in the second set, but he wasted a break point. Rublev fended off a break point at 4-3 and closed out the match with a break in the ninth game.

In the second match Danil Medvedev has claimed his 12th consecutive win since the 2020 Paris Bercy Masters 1000 tournament with a 6-2 6-4 win over Kei Nishikori after 1 hour and 15 minutes.

Nishikori dropped serve at the start of the first set after a long rally and saved a break point at 0-2 to win his first game. Nishikori pulled the break back in the fourth game to draw level to 2-2. Medvedev won 16 of the next 21 points to claim the opening set 6-2 with two consecutive breaks. Medvedev earned his second break, as Nishikori netted a backhand in the fifth game. The Russian player opened up a 5-2 lead, when Nishikori sent his volley wide and sealed the first set with a hold at 15.

Both players went on serve in the first eight games, before Medvedev earned the decisive break at deuce. The Russian player sealed the win with a service winner in the 10th game to secure Russia the spot in the semifinal.

Last year Russia set up a semifinal clash against Serbia with an unbeaten 4-0 tie record. Medvedev pushed Novak Djokovic to a third set, but he was not able to force the tie to a decisive doubles match. Russia will face the winner of Group A. Serbia and Germany remain in contention for the semifinal spot in this group.

Ben McLachlan and Yoshihito Nishikori saved a match point to beat Evgeny Donskoy and Aslan Donskoy 4-6 6-3 12-10 in the doubles match. Karatsev made a double fault at 10-9 in the match tie-break. Mclachlan sealed the win two points later with a powerful serve.