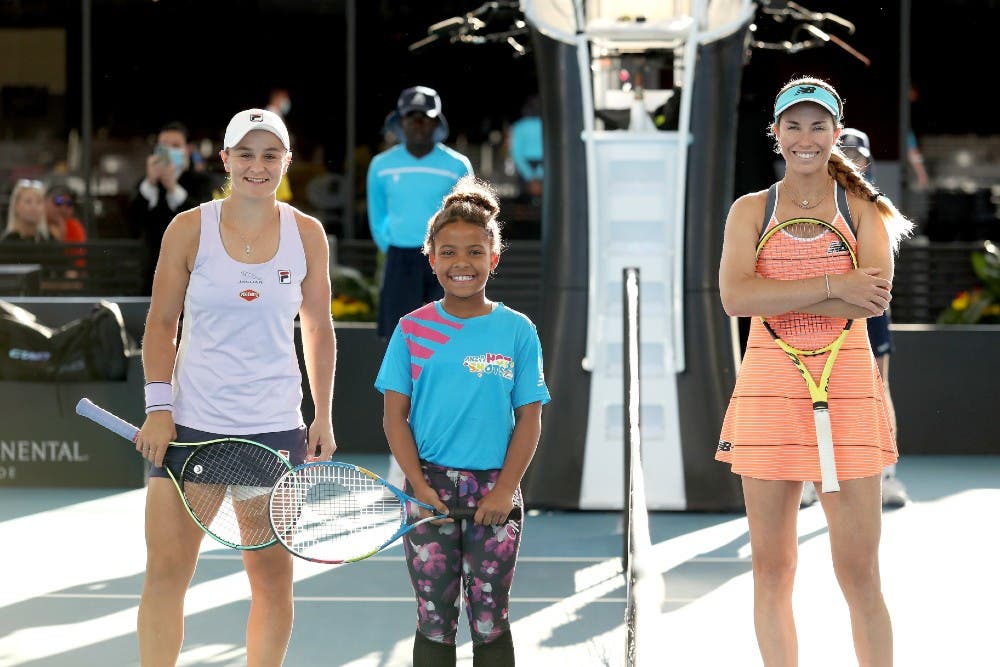 Collins rallied from a break down in both sets to win the last five sets in each.

Barty won all three of their previous matches and beat Collins 3-6 6-1 7-6 (7-5) in the semifinal of the 2020 edition of the Adelaide International.

Barty earned her immediate break in the first game of the opening set to open up a 3-1 lead, but Collins reeled off five consecutive games with two consecutive breaks to close out the first set 6-3.

Barty opened up a 4-1 lead with a break at love in the second set after winning 11 of 12 points. Collins won 20 of the next 23 points to win the final five games with two breaks in the seventh and ninth games.

Collins has exttended her win-loss record in 2021 to 9-3 following a quarter final at the Yarra Valley Classic in Melbourne and a semifinal in the Phillip Island Trophy last week.

Belinda Bencic cruised past Japanese lucky loser Misaki Doi 6-1 6-3 after 1 hour and 14 minutes to move into the quarter final. The Swiss player saved 10 of the 12 break points she faced. In their only previous clash Bencic had to save a match point to beat Doi in three sets at the 2015 US Open.

Bencic broke Doi in all four of Doi’s four service games and closed out the first set with a backhand crosscourt winner. Bencic broke serve to love to race out to a 5-1 lead. Doi converted her fourth break point in the seventh game to claw her back to 3-5. Doi held two break points in the ninth game, but Bencic saved them before converting her third match point.

US teenager Coco Gauff came back from one set down to beat Petra Martic 5-7 6-3 6-4. Gauff reached her first WTA Tour quarter final since her run to the semifinal in Lexington last summer.

Martic got an immediate break at love to open up a 2-0 lead. Gauff broke back in the fourth game to draw level to 2-2. Martic converted her sixth break point in the fifth game to take a 3-2 lead.

Martic was not able to serve out the first serve at 5-4, as Gauff broke back on her fourth chance to draw level to 5-5. Martic broke Gauff at 15 in the 11th game to take a 6-5 lead.

In the second set Gauff earned an early break in the second game to open up a 3-0 lead and held her next service games. The US player saved two break points in the ninth game to serve out the set 6-3 at deuce.

Gauff started the third set with her only break at love with a passing winner in the first game. The 2019 Linz Open winner set up an all-American quarter final against Shelby Rogers, who upset Joanna Konta on Tuesday.

“I have known Shelby for a couple of years now. She lives in the same city as I do, so we practiced together a couple of times. I know she is a big hitter and she hits the ball pretty flat, goes for big shots. So we know each other’s games pretty well and it will be interesting to see how it goes. I am just going to go out there and have fun”, said Gauff.