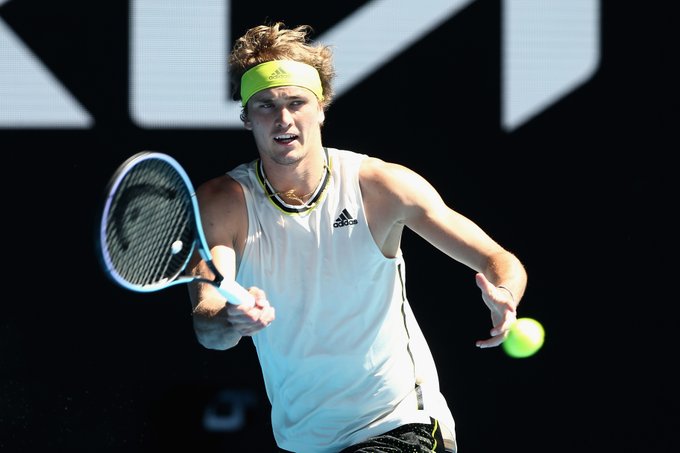 Last year’s US Open finalist Alexander Zverev cruised into the Australian Open fourth round with a 6-3 6-3 6-1 win over Frenchman Adrian Mannarino after 1 hour and 43 minutes on the Rod Laver Arena.

Zverev has extended his winnin record to 6-0 in his sixth head-to-head matches against Mannarino. In their most recent clash Zverev beat his French rival 7-6 (13-11) 6-7 (7-9) 6-4 after two hard-fought tie-breaks.

Zverev converted five of his twelve break points and saved all three break points he faced . The number six seed hit 35 winners including 19 aces to move into the fourth round at Melbourne Park for the third consecutive year. The German lost to Dominic Thiem in four sets 6-3 4-6 6-7 (3-7) 6-7 (4-7) in last year’s edition of the Australian Open.

Zverev faced two break points, as he was serving at 2-2, and won four consecutive points to take a 3-2 lead. The 2018 ATP Finals champion earned a break at 15 in the sixth game with a deep return and sealed the first set 6-3 with a service winner in the ninth game.

Zverev converted his fifth break point in a five-deuce third game to take a 2-1 lead after a double fault from Mannarino. He consolidated the break by holding his serve with a forehand winner.

Zverev held his next service games and sealed the second set after forcing an error from Mannarino in the ninth game. Zverev went up a double break at the start of the third set and closed out the match with an ace.

“I did not feel my best, probably because Sasha was playing too well. He was really consistent, serving well, putting a lot of pressure on me. When you are on the other side of the net, you feel like you don’t have that much time to play, and you need to serve really well. Otherwise, it’s going to be complicated because he is serving too well. I think he was too good”, said Zverev.

Grigor Dimitrov won seven consecutive games, before Carreno Busta was forced to retire due to illness.

Karatsev dropped just three first service points and fired 13 winners. Karatsev saved two break points at 0-1 in the second set before breaking twice in the fifth and ninth games to seal the second set 6-3. Schwartzman got an immediate break in the first game of the third set, but Karatsev broke serve in a row in the second and fourth games to close out the match.

Karatsev won 18 of his 20 on the ATP Challenger Tour. “It’s an unbelievable feeling. I qualified, so I was already very happy. I have had a lot of worries over the past few years, so I am relieved, overjoyed, to be at this stage. I had a big knee injury a few years ago, so to be here and represent Russia at the ATP Cup last week really gave me confidence”, said Karatsev.