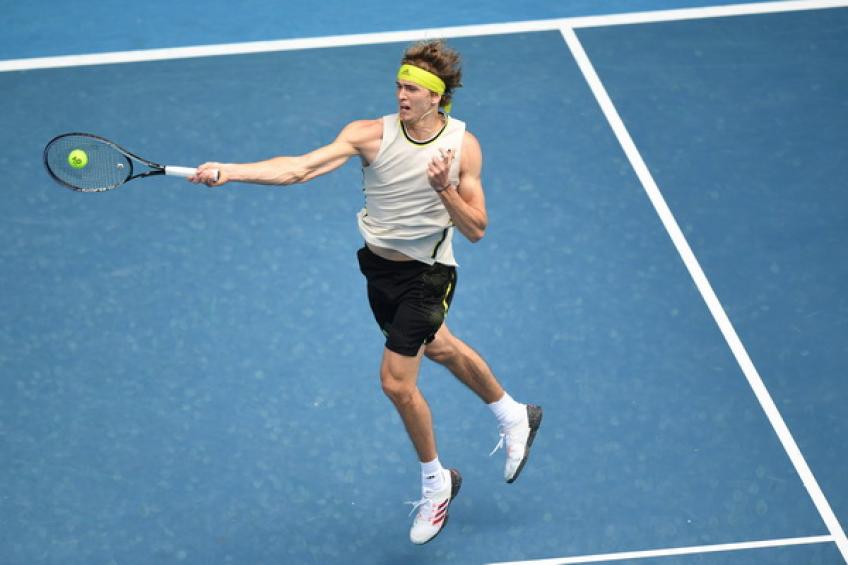 Last year’s US Open finalist Alexander Zverev came back from losing the first set to edge US Marcos Giron 6-7 (8-10) 7-6 (7-5) 6-3 6-2 after 2 hours and 42 minutes in a hard-fought match in the first round of the Australian Open in Melbourne two days after helping Germany reach the ATP Cup semifinals.

Giron fended off three break points in the opening game before Zverev forced an error to take a 4-2 lead. Zverev netted a forehand to drop serve in the eighth game.

Zverev went up a 5-2 lead with a double break in the third and sixth games. Giron pulled one break back in the ninth game, as Zverev sent a volley long. Zverev hit a service winner at 6-5 in the tie-break to seal the second set. Zverev won 20 of 22 first service points.

Zverev earned two breaks in the first and ninth games to win the third set 6-3. The German broke twice more in the fourth and eighth games to close out the fourth set 6-2. Zverev hit 50 winners, including 16 aces.

“Giron played incredibly well and played really well on the big stage against a top 10 player. He had me on the ropes and the second set could have gone either way. I didn’t want to go two sets down. I am happy to get through and in the end I played better. The first round of a Grand Slam is never easy. I think it’s incredible to play in front of fans again. That’s something that we missed over the last year or so. I still felt my abs and my back a little bit, so the serve was no full power like it usually is. I barely got over 210 km/h on the serve, which is quite fast, but for me I know I can go faster than that, so I had to vary it a little bit. I had for a lot of spin. He played well, and for me the longer the match went, the better I started playing. That’s something positive”, said Zverev.

Zverev had a 1-2 record in his singles matches for Germany at last week’s ATP Cup in the same Melbourne Park venue.

“I think it was good first round win today. It’s never easy to play your first match here. It’s been three weeks that we have been here getting ready for this tournament. I am happy that I was playing well today. I was playing aggressive, playing some good balls, so I am really happy to be through to the second round”, said Wawrinka.

Emil Ruusuvuori battled past 10-time ATP Tour champion Gael Monfils 3-6 6-4 7-5 3-6 6-3 scoring one of the biggest wins of his career. The Finnish player fended off 17 of the 23 break points, including five chances in the final set. Monfils has lost seven consecutive tour-level matches.

Ruusuvuori will take on Pedro Martinez, who cruised past Yoshihito Nishioka 6-1 6-1 6-1.

“I played a couple of times against Gael. He is very tough, very good physically. He makes a tonne of balls. I will take the good things from today’s match and try to put them on the court on Wednesday and we’ll see how it goes”, said Ruusuvuori.

Former Australian Open semifinalist Milos Raonic eased past Federico Coria 6-3 6-3 6-2 to secure his spot in the second round, where he will face Corentin Moutet. The young Frenchman rallied from one set down to beat Australia’s John Millman 6-4 6-7 (4-7) 3-6 6-2 6-3 after 3 hours and 45 minutes.