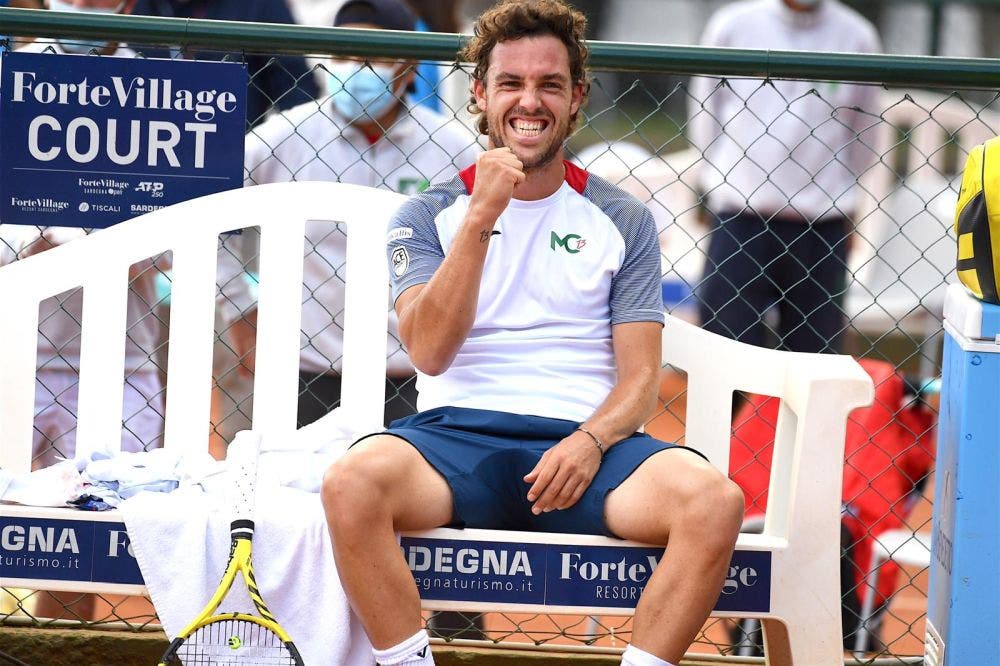 Former Roland Garros semifinalist Marco Cecchinato talked about his come-back during the 2020 season after a diffcult period and the birth of his son Edoardo.

Cecchinato made the history of Italian tennis at 2018 Roland Garros, when he became the first player from his country to reach a Grand Slam semifinal since Corrado Barazzutti at the 1978 French Open.

During a successful 2018 season Cecchinato reached won his first match in a Masters 1000 tournament in Monte-Carlo, claimed his maiden ATP title in Budapest and advanced to his first semifinal in a Grand Slam tournament at Roland Garros after beating 2016 champion Novak Djokovic as world number 72. The Palermo-native player was then beaten by Dominic Thiem in the semifinal. He became the lowest-ranked Roland Garros semifinalist since Andrey Medvedev in 1999. He rallied from two sets down against Marius Copil in Roland Garros first round and also beat Pablo Carreno Busta and David Goffin en route to the semifinal. He clinched his second ATP Tour title in Umag beating Guido Pella in the final and reached the semifinal in Eastbourne. He started the 2019 season very well winning his third title in Buenos Aires beating Diego Schwartzman improving his best ranking to world number 16 and reached the semifinals in Doha and Munich, but he let two set leads slip away in the first round against Nicholas Mahut at Roland Garros.

In the next two years Cecchinato was not able to deal with the pressure and did not fulfil the expectations of Italian fans. He fell to world number in the ATP Ranking on 9 March 2019, his lowest ranking since number 136 on 8 May 2017.

Cecchinato made a successful come-back when he snapped a 7-match tour losing streak by beating Kyle Edmund in Rome first round as qualifier. He returned to Roland Garros, where he came through the qualifying tournament en route to the third round, where he lost to Alexander Zverev.

Last October Cecchinato saved a match point against his compatriot Gianluca Mager en route to reaching his fourth ATP Tour Final at the Sardinia Open and finished the 2020 season at number 79 in the ATP Ranking.

“I found again the old spirit. There are many positive aspects. I feel in good shape and I have worked very hard on the court. I needed the long period without tournaments due to the pandemic to continue working hard. I have had the chance to reset. I spent many hours on the court with Max Sartori. I needed time to find the right motivation that I had lost. After reaching my career-high at world number 16 I fell outside the top 100. I got through a difficult period. People started criticising me. I suffered from this situation, but at the same time I wanted to bounce back”, said Cecchinato in an interview to Sky Sport.

The 28-year-old Italian player has returned to his best form thanks to the advice of his coach Massimo Sartori, who also trains Andreas Seppi.

“For me Max is the best Italian tennis coach. I trained with him when I was 17 years old and I matured as a player. I am now more solid at physical level. My son Edoardo was born this year. This has been the biggest joy of my life. Edoardo has changed my life and given me the extra motivation. I am now more relaxed. I have missed this positive feeling for a long time during 2019 and in the first part of 2020. I have improved on outdoor hard court. I think that this will help me improve on clay ”.

With his semifinal at Roland Garros Cecchinato inspired other Italian players. Matteo Berrettini reached the semifinal at the 2019 US Open. Fabio Fognini won the Monte-Carlo title in 2019. Jannik Sinner won the Next Gen ATP Finals in Milan in 2019 and his first ATP title in Sofia last November.

“The golden period of Italian tennis started with my semifinal at Roland Garros. I am pleased to hear from many players and coaches that I was an inspiration for other players. There are now many Italian good players. We push each other and this has helped the growth of Italian tennis. Matteo Berrettini achieved an incredible result when he qualified for the ATP Finals. This great result has inspired other Italian players”.

Cecchinato will start his 2021 season at the ATP 250 in Melbourne one week before the Australian Open.

Max Sartori is happy with Cecchinato’s season in 2020.

“Marco played very well in Rome. After reaching the quarter final in a Challenger tournament in France he came through three qualifying rounds before beating Kyle Edmund. It was a very important match for him. After Rome he reached the main draw at Roland Garros after playing three qualifying matches. He also qualified at Paris Bercy”.

WTA Abu Dhabi Daily Preview: All Third Round Singles Matches to be Played on Sunday