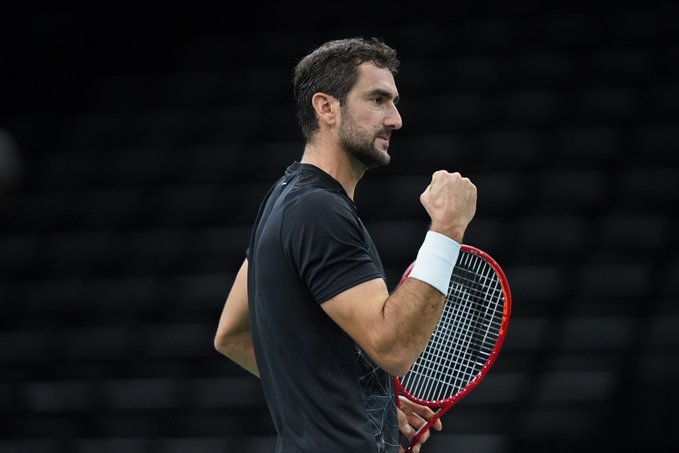 At the age of 32 Marin Cilic is hoping that his best tennis is still to come despite already enjoying various success on the Tour.

The former top 10 player has a resume that currently features 18 ATP titles, including the 2014 US Open. Making him one of only a handful of players to have been able to win a major title during the era of the Big Three. Furthermore, he has been ranked as high as third in the world and has earned more than $28 million in prize money so far in his career.

Yet Cilic feels he has more to give as he chases after his first trophy of any sort since his triumph on the grass at the Queen’s Club back in 2018. That was also the last time he contested a final on the Tour.

“I feel that I still haven’t reached my peak,” Cilic told reporters on Monday. “Peak meaning that I feel the best on the court physically, mentally, technically, that I play my best tennis. I would like to reach that peak and feel that, ‘okay, I have done that. This is what I was working for, and I can relax my mind now and go into retirement’.
“I feel definitely, I wouldn’t say disappointed, but just, that maybe I haven’t reached my peak and accomplished what I could have accomplished.”

Unseeded at this week’s Paris Masters, the Croat got off to a winning start at the tournament by defeating 14th seed Felix Auger-Aliassime 6-0, 3-6, 6-3. Cilic is playing in his 10th ATP event of 2020 (excluding ATP Cup) but is yet to reach a quarter-final this season. His best run was to the fourth round of the Australian Open in January.

“I was not finding my best form this season, last season, as well, compared to the last few years before,” he reflected.
“This season has been really good for me in terms of just getting some matches, playing guys, going back home,training and playing a tournament again.’
“I felt that with these kinds of conditions it’s quite positive in a way that you’re not dropping your rankings, you’re getting a chance to play. So that’s been good in my own personal opinion.”

Unlike some of his rivals the break in competition earlier this year due to the COVID-19 pandemic was a welcome addition for Cilic, who became a parent for the first time at the start of the year. The break allowed him to spend time with his wife and child during what he describes as an ‘amazing time’ for him.

Now the focus is on Paris this week for Cilic who plays Corentin Moutet in the second round. Should he win, he could play second seed Stefanos Tsitsipas in what would be the first meeting between the two since 2017.

“My focus is to play well. Whatever it is. I’m not looking too far into the tournament,” Cilic explained.
“I didn’t have great success in this last period, so I’m not allowed to say that I want to go deep. But I just want to enjoy myself on the court. I felt that I played really good tennis (against Auger-Aliassime) and I would be really happy if I can keep this level.”

Cilic is currently ranked 43rd in the world.

Related Topics:Marin Cilic
Up Next