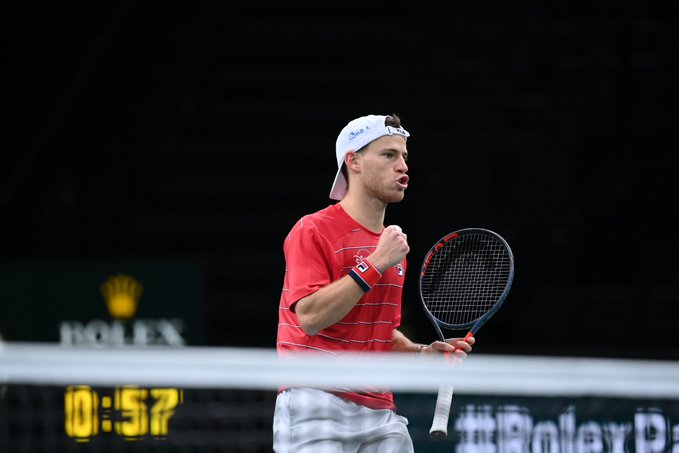 Argentina’s Diego Schwartzman secured the final spot for the 20th edition of the Nitto ATP Finals in London.

Schwartzman is the eighth singles player from Argentina to qualify for the ATP Finals and the first to play at this event since Del Potro in 2013.

Schwartzman did not drop a set en route to his second ATP Tour title in Rio de Janeiro in February 2018. He rallied from two sets down to beat Kevin Anderson and advance to his second Grand Slam quarter final at Roland Garros. He beat Dusan Lajovic 11-9 in the fifth set en route to the Australian Open fourth round. He also advanced to the semifinals in Antwerp and to the second round at Wimbledon.

The Argentine player finished runner-up in two ATP Tour finals in Buenos Aires and Vienna in 2019 and reached his first Masters 1000 semifinal in Rome. He equalled the biggest win of his career by beating Alexander Zverev to reach the quarter final at the US Open and advanced to the Wimbledon third round for the first time before losing to Matteo Berrettini after holding three match points.

The Buenos Aires native player broke into the top 10 for the first time in his career on 12 October, after he reached his maiden Grand Slam semifinal at Roland Garros. A few weeks earlier Schwartzman beat Rafael Nadal en route to his maiden Masters 1000 final in Rome. The Buenos Aires resident finished runner-up in two ATP 250 tournaments finals against Christian Garin in Cordoba and  Alexander Zverev in Cologne.

Schwartzman is the son of Ricardo and Silvana Schwartzman. His parents have Jewish roots. During the Holocaust his Polish maternal great-grandfather was put on a train to a Nazi concentration camp. Diego has two brothers (one is a computer programmer, the other is a travel agent) and a sister, who works as a lawyer.

“One of the sports I played was football. When I was little , my grandmother bought me uniforms from European teams like Real Madrid and Barcelona. The first team I played for, I scored a lot”, said Schwartzman in an interview to the ATP website.

As a junior he and his family sold rubber bracelets with names and logos of popular football teams to help pay for travel expenses.

“I never imagined my career being where it is now. No matter what I have dealt with, I have always worked hard, and I think pushing through those hurdles has made me a better competitor and an even better person. I was never a top junior, the only junior Grand Slam I played was the 2010 US Open qualifying, where I lost in the first round”.

At the age of 15 Schwartzman practised with former top 10 player Juan Monaco and Maximo Gonales.

The ATP Finals As You Never Seen Before