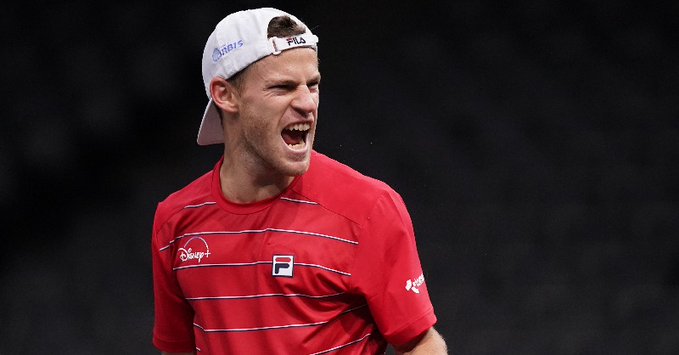 This year’s Rome Masters 1000 finalist and Roland Garros semifinalist Diego Schwartzman beat Richard Gasquet 7-5 6-3 after 84 minutes booking his spot in the third round.

In the opening set Schwartzman broke serve in the second game to build up a 4-1 lead. Gasquet converted his third break point in the seventh game and held serve at love to draw level to 4-4. Schwartzman closed out the first set 7-5 with a break in the 12th game.

Schwartzman earned an early break in the second game at deuce to open up a 3-0 lead and never looked back holding his next service games to close out the second set 6-3.

Schwartzman will secure the final qualifying spot for the Nitto ATP Finals in London, if he reaches the semifinal in Paris Bercy.

“I am feeling great, because I have the chance in my hands. I am trying to do my best, and I am feeling really good this week. After Rome, I got a lot of confidence and I have been playing very good tennis. I want to be in London, and I hope to be there”, said Schwartzman.

Schwartzman will face Spain’s Alejandro Davidovich Fokina, who beat Benjamin Bonzi 6-4 6-4. The Spanish player earned the first break in the third game to take a 3-1 lead after coming back from 30-40 down. Bonzi broke back in the sixth game to draw level to 3-3. Davidovich Fokina got his second break in the seventh game to clinch the opening set 6-4.

Danil Medvedev advanced to the third round at the Paris Rolex Masters, when his opponent Kevin Anderson retired from the match wit a right leg , as he was trailing 5-2 in the tie-break of the first set. Anderson beat Medvedev 6-4 7-6 (7-5) in the quarter finals at the Erste Bank in Vienna.

Anderson saved two break points in the third game and three more chances in the fifth game at deuce. Medvedev fended off a break point to hold serve at deuce in the eighth game. Both players went on serve en route to the tie-break. Medvedev got a mini-break on the fifth point to take a 5-2 lead before Anderson called it a day. The South African player had already withdrawn from the Vienna semifinal against Andrey Rublev last week.

Medvedev set up a third round match against Alex De Minaur, who beat last week’s Vienna finalist Lorenzo Sonego 6-3 7-5 after 1 hour and 27 minutes.

De Minaur broke serve at 15 in the third game to take a 2-1 lead, as Sonego made three unforced errors. Sonego made a double fault, as he was serving at 3-5 40-30. De Minaur earned a break point with a return winner and converted his chance to close out the first set 6-3, as Sonego made a backhand error.

Sonego saved saved two break points in the sixth game and held serve with an ace at deuce to draw level to draw level to 3-3. De Minaur sealed the win with a break at love in the 12th game.

Milos Raonic hit 11 aces and dropped just four of his first service points in a 6-4 6-4 win over Pierre Hugues Herbert with a break in the fifth game in each set. Raonic, who lost the 2014 Paris Bercy final against Novak Djokovic, will face world number 91 Marcos Giron from the USA, who beat Matteo Berrettini.

Mannarino saved a break point in the third game and two break points in the seventh games before breaking serve at love in the eighth game to clinch the first set 6-3.

Mannarino broke serve in the sixth game and sealed the third set 6-3 on his second match point.

David Goffin Happy To See The Back Of 2020 Season