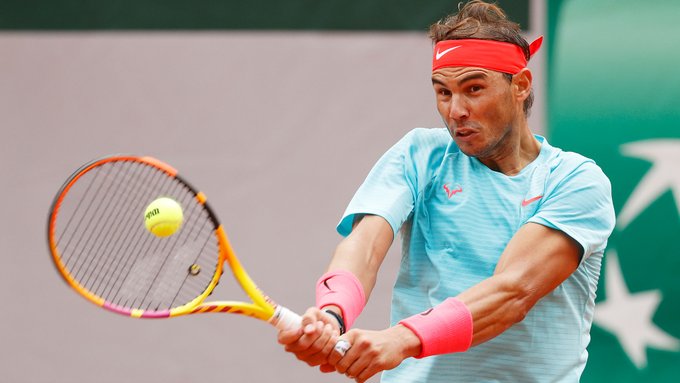 A relentless Rafael Nadal cruised into the second week of Roland Garros with a 6-1 6-4 6-0 win over Stefano Travaglia.

The Spaniard produced a dominant display over the Italian as he sealed a place in the second week.

Barely breaking a sweat this week, metaphorically, Nadal continued his stunning form in the first set as his play had extra urgency about it today.

More on the forehand as he looked to finish points early with different tactical variations on the serve.

The body serve in particular had caused Travaglia all kinds of problems as his game was suffocated at the hands of Nadal.

A 6-1 set sent a massive statement of intent as he looked to advance in relatively quick fashion.

However, Travaglia is known for his big hitting and in the second adapted to make a more competitive match.

Working the Italian, held onto his first three service games as he managed to execute some perfectly constructed points to make it a competitive contest.

But, champions know when to strike and Nadal stopped the momentum in the seventh game with some brutal hitting.

A break in game seven was the crucial moment as he broke Travaglia’s serve and spirits as Nadal raced to a two sets to love lead.

From then on, it was all about Nadal’s pace, power and execution as he hit 28 winners in the match and didn’t drop a single game in the final set.

A majestic win was sealed in 1 hour and 37 minutes to book his place into the last 16.

A phenomenal first week as he ensures he keeps up with his nearest rival, Novak Djokovic ahead of the second week.

Next for Nadal is American qualifier Sebastian Korda.

However one former champion who won’t be competing in the second week is Stan Wawrinka as he suffered a five set defeat to Hugo Gaston.

This means that a scintillating match between Wawrinka and Thiem will have to wait as it is Hugo Gaston who will face the US Open champion on Sunday.