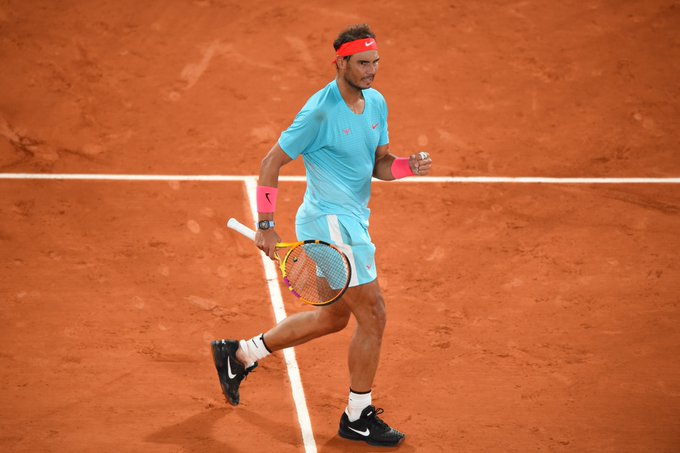 In his 100th match at Roland Garros, Nadal overcame a tricky opening two sets to halt the progress of 19 year-old Jannik Sinner.

There were no sign of nerves from the Italian at the start of the contest as he was competing in his first grand slam quarter-final.

Sinner was hitting the ball with great authority off both wings as he broke down Nadal’s defences rather successfully.

Meanwhile the Spaniard was struggling to get great depth on his shots earlier on in slow late-night conditions in Paris.

Some early half-chances for the 19 year-old were snuffed out by the 12-time champion as he forced the youngster to make some extraordinary shots.

Although Nadal wasn’t at his best, he was finding solutions especially creating some wide angles to exploit open space on the court.

However Sinner, who was starting to hammer down his forehand finally got his break in the eleventh game as he looked to take the first set from Nadal.

But it turns out serving out a set against Rafael Nadal isn’t all that easy at Roland Garros as some tight decision-making and costly unforced errors saw him hand the break back to the Spaniard. A tiebreak would decide the opening set.

As the tiebreak evolved, Nadal played with more margin and produced more aggressive positioning on the court.

While Sinner’s nerves were there to see as more unforced errors evolved in the Italian’s game.

Despite a tame end to the set, Sinner remained undeterred and continued to suffocate Nadal to the back of the court.

Moving with a more aggressive mindset, the Italian broke in the fourth game with some powerful shot-making especially on the forehand side.

Just like the first set though, Nadal broke immediately back taking advantage of Sinner errors in important moments.

The forehand was saving the Spaniard on multiple occasions when defending against the attack of the Italian.

87-0 was Nadal when winning the opening set and this seemed to be going a similar fashion as he had too much tactical variety and experience for his younger opponent.

A break in the ninth game secured the crucial break as Nadal edged into a two sets to love lead as play headed into Wednesday morning.

The second set was a crucial blow as Nadal started to play with a lot of freedom and construct points with confidence and move the Italian around the court.

As the rallies extended, the Italian became even more tired as the heaviness of Nadal’s shots and physicality of the contest was starting to play it’s part.

Finding difficult angles and high percentage plays, Nadal found his groove in the third set as he took apart his opponent.

Depth, Accuracy and timing were all there for Nadal as three breaks of serve in the final set secured victory and a place in the final four.

Sinner made it tough for Nadal in the opening two sets but the Spaniard used his tactical prowess and experience to secure an impressive victory.

The 12-time champion will hope to be firing on all cylinders on Friday as he looks to book his place in a 13th Roland Garros final.