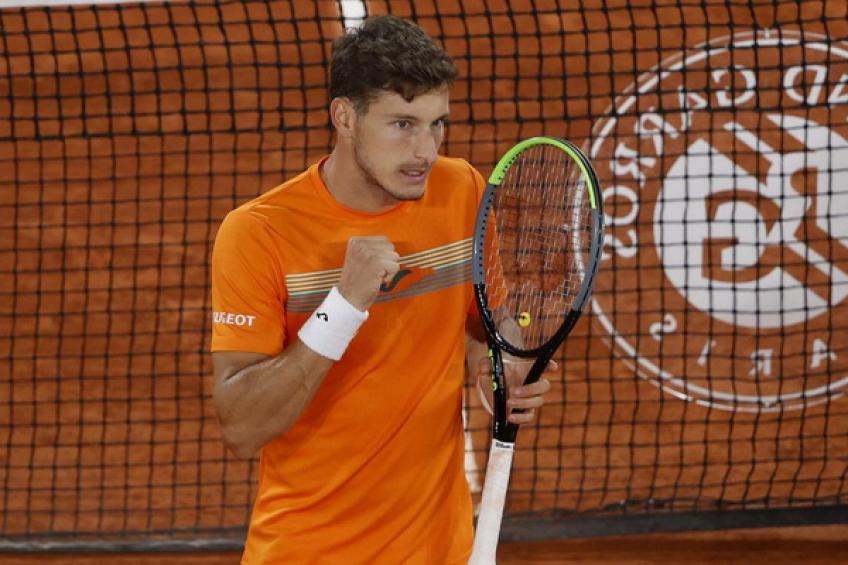 Spain’s Pablo Carreno Busta has reached his fourth Grand Slam quarter final and his second in Paris after 2017 after beating German qualifier Daniel Altmeier 6-2 7-5 6-2 in the fourth round after 2 hours and 22 minutes at Roland Garros.

Carreno Busta has qualified for his second quarter final at Grand Slam level in 2020 after advancing to the US Open semifinal last September.

In the opening set Carreno Busta earned his first break in the third game and held serve with a service winner to open up a 2-0 lead. Altmeier wasted three game points at 1-3 and dropped his serve, when he hit his backhand long.

Carreno Busta fended off a break point chance with a service winner in the sixth game and closed out the first set with a hold at 5-3 after 43 minutes.

Altmeier earned the first break of the second set with a break at 15 in the sixth game to open up a 4-2 lead. The German player hit a service winner to race out to a 5-2 lead and served out for the set at 5-3. He saved the first break point with a forehand winner, but Carreno Busta converted his second chance, when Altmeier made an error.

Carreno Busta drew level to 5-5 after three deuces in the 10th game before earning the break in the 11th game, when Altmeier hit a backhand long.

Carreno Busta held serve at 30 after an error from Altmeier to win his fifth consecutive games from 2-5  clinching the second set 7-5.

Altmeier fended off three break points in the fifth game to claw his way back to 1-4. Carreno Busta sealed the third set with a hold at 5-2.

Altmeier was bidding to become the lowest-ranked Roland Garros quarter finalist since Henry Leconte in 1992.

The Spaniard will face Novak Djokovic in the quarter final on Wednesday. They have already met in a Grand Slam tournament this year at the US Open. Djokovic controversially hit the linesman with the ball and was disqualified. This was the only defeat on the ATP Tour for Djokovic in 2020.

“I have had stomach problems. I did not feel well. Sometimes you have to win games without being at 100%. They are usually the most important ones. Now I will try to recover as soon as possible. I will try my best against to overpower Novak and move into the semifinals”, said Carreno Busta.