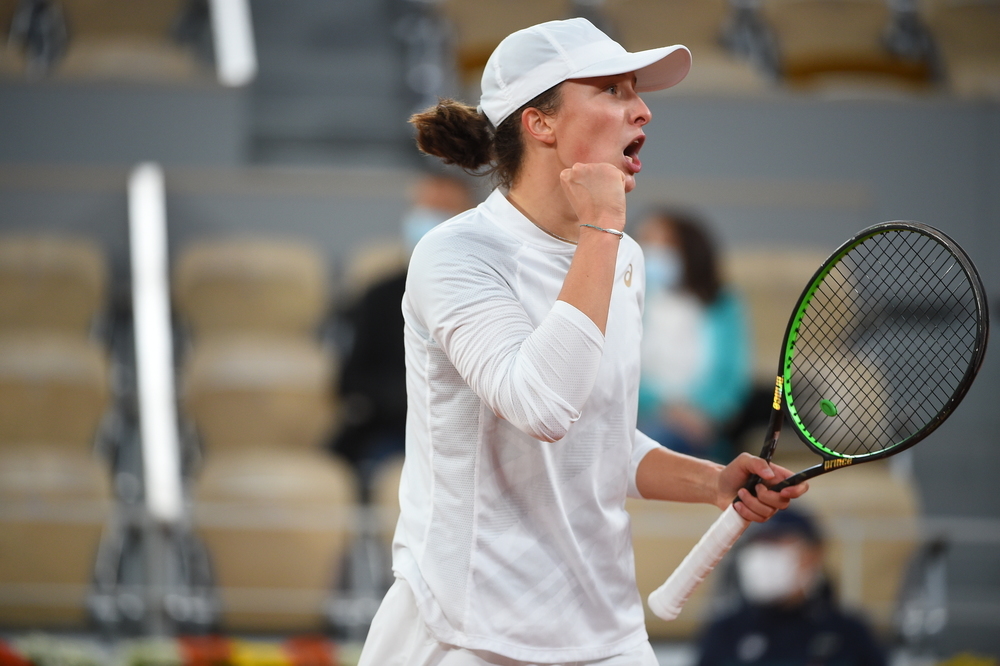 Iga Swiatek charged into her first-ever Grand Slam semi-final with an assured 6-3 6-1 victory over qualifier Martina Trevisan at the 2020 French Open.

The Pole, 19, has been tipped for great things ever since she won three ITF titles when she was just 15. She cemented her status as a future star when she won four more ITF titles before the age of 18 and then won junior Wimbledon in 2018. However, it looks like her rise to the top might happen sooner than expected.

“I felt kind of like I was playing in the middle of the night,” Swiatek said in her on-court interview. “But I’m pretty happy with my performance. Martina had a great tournament. She was on fire from the beginning, so big congratulations to her.”

The Pole continued, “Right now I feel good, so I’m just going to keep up my routines. I have doubles tomorrow, which is good preparation for singles.”

Swiatek made a slow start to the match. She made eight unforced errors in the opening four games and fell 3-1 behind.

However, once the Pole settled, she rarely looked troubled. She hit a couple of excellent winners as she broke back in game six. Then she produced a flawless service game to move 4-3 ahead.

Trevisan fought hard to try and regain control of the match. But Swiatek got the better of her in two tight games to claim the first set.

Swiatek began the second set in style. She unleashed three superb winners to break Trevisan in the first game. The Pole then clung onto her serve to win her seventh consecutive game.

After the Italian surrendered another break to fall 3-0 behind, she finally stopped the rot with an excellent return game.

However, Swiatek quickly crushed any hopes of a comeback when she broke Trevisan again courtesy of another flurry of winners. Then the Pole won the next two games to secure an impressive win.

Incredibly, Swiatek, who started the French Open ranked 54 in the world, will now head into her semi-final on Thursday as the favourite. This is because her opponent is another qualifier, Nadia Podoroska, who was the World No.131 before the tournament began.

The Argentine, 23, produced arguably the shock of the tournament when she beat World No.5 Elina Svitolina in the quarter-finals. Despite this, it would still be a surprise if she beat one of the WTA’s most promising young stars.

As for Swiatek, she now has a great chance to join the illustrious list of teenage Grand Slam winners that includes the likes of Martina Hingis, Serena Williams and Maria Sharapova.

If the Pole manages, she will shoot up to No.17 in the rankings. But whatever happens from now on, she has already had a magnificent tournament and she seems to have a very bright future indeed.