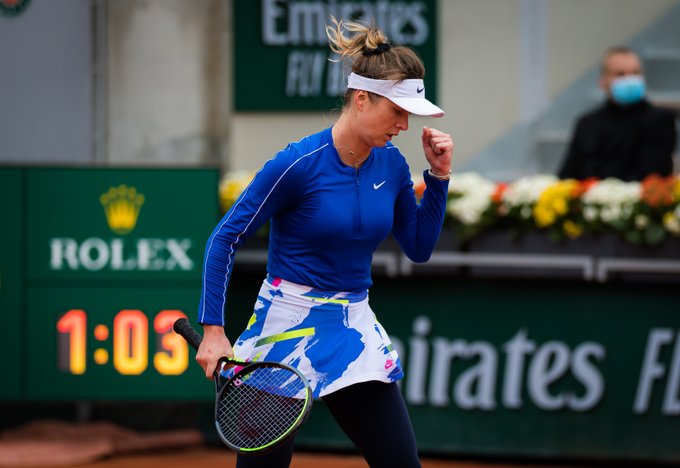 Elina Svitolina produced a superb performance to hammer Caroline Garcia 6-1 6-3 and earn a place in the French Open quarter-finals for the third time.

The Ukrainian, 26, now has a great chance to go on and claim her first Grand Slam title. She is the highest remaining seed left in the tournament and one of only four still in the draw. However, that does not mean it will be easy for the World No.5.

“My only advantage is that I’m going out on court and I have to bring the best game that I have,” Svitolina said in her press conference. “The girls deserve to be there. They beat those higher-ranked players and they are there for a reason. So I don’t look any further than my next round.”

The Ukrainian continued, “It’s very important to not focus on other people. I have my own way, and that’s what I’m trying to do. If I was looking at who is winning and losing, I would get lost. And I would also put too much pressure on myself, so it’s pointless to do that.”

Svitolina’s attacking intent was clear from the beginning of the match. She hit the ball hard and deep and put Garcia under as much pressure as possible at all times.

In the opening game, the Frenchwoman made four unforced errors to hand the Ukrainian a break. Then in the third game, the World No.5 seized another break with two blistering winners to move 3-0 up.

Garcia briefly sparked into life in game four. She hit a flurry of winners to get one of the breaks back. However, it was a short-lived revival, as Svitolina immediately broke her again to restore her three-game lead.

After a comfortable hold to make it 5-1, the Ukrainian turned on the style. She hit three stunning winners to break the Frenchwoman for a fourth time and claim the opening set in just 28 minutes.

Although they do not excuse the statistic completely, the windy conditions on court definitely contributed to the 18 unforced errors Garcia made in the first set.

Therefore, it was important for the Frenchwoman to adapt in the second set. For two games, she managed it. She made Svitolina work hard for a break and then broke back immediately.

However, Garcia then made more errors in game four. And they proved costly, as the Ukrainian broke for the sixth time in succession to establish a 3-1 lead.

Both players made errors in the next game. But Svitolina produced high-class tennis when she needed it. She hit an ace and a fierce unreturnable second serve to win it from deuce.

After the Frenchwoman finally secured her first hold of the match in 13th game, the Ukrainian held to love to make it 5-2.

Garcia held again to force Svitolina to serve for the match. And the World No.5 recovered from 15-30 to do exactly that. She hit an unreturnable serve to seal it.

Last Month Martina Trevisan Had Only Ever Defeated One Top 100 player, Now She Is A French Open Quarter-Finalist