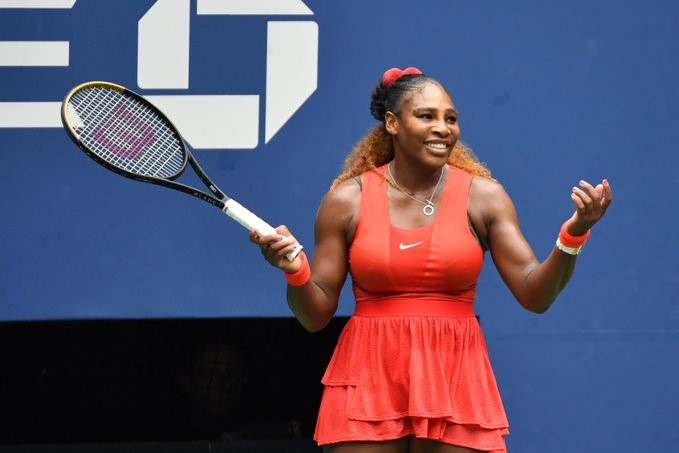 Serena Williams passed another difficult test in her quest for Grand Slam number 24 when she beat Tsvetana Pironkova 4-6 6-3 6-2 in the quarter-final of the 2020 US Open.

The American, 38, has now won three consecutive matches that have gone to three sets. She fought back from a set down to overcome Sloane Stephens. Then she recovered well after losing the second set to Maria Sakkari.

“(That match) just shows me how tough mums are,” Williams said in her on-court interview. “When you can give birth to a baby, you can do anything. We saw that with Tsvetana today. She played unbelievable.”

The American continued, “For whatever reason, an hour in I get more energy, so I guess that’s a good thing. At the beginning, I was a little fatigued. Obviously, I can’t do that if I want to keep winning, so I’m going to try and figure that out.”

Both players held serve comfortably in the first four games. Williams used her trademark power to keep Pironkova well behind the baseline. The Bulgarian cleverly manipulated the angles to ensure the American stayed off-balance.

In the fifth game, the rhythm changed. Pironkova dragged Williams from one side of the court to the other and then hit a forehand winner into the opposite corner to make it 30-all. The American then executed a familiar sequence: a double fault to gift a break point followed by an ace to save it.

However, Williams was far from safe. She made an unforced error to hand Pironkova another break point. And the Bulgarian seized it with a signature backhand down the line.

Pironkova consolidated her advantage impressively with two comfortable holds to go 5-3 up. Then she put the six-time US Open champion’s serve under pressure again. She earned one break point by besting Williams in a well-constructed rally. Then she gained another with a superbly judged lob.

The American saved the first with a huge serve. Then the Bulgarian wasted the second by making an error. It hardly mattered though. Pironkova served well to close out the set 6-4.

Williams made a tentative start to the second set. She hit a series of weak serves and Pironkova punished her with an immediate break.

However, this disappointment seemed to motivate the American. She unleashed a succession of huge strikes to break back in the next game.

Buoyed by this success, Serena continued to attack. She forced another break point in game four which Pironkova did well to save. But the tide was turning.

And in game eight, the American got what she was looking for. The Bulgarian made three unforced errors to gift Williams three break points. And the 23-time Grand Slam champion battled to victory in a 26-shot rally to take the second one. Williams then held comfortably to level the match at one-set-all.

The decider began with a marathon game. Williams threw everything she had at Pironkova. She also ran hard for every point in search of an important break. Eventually, her efforts were rewarded. The Bulgarian hit a forehand just long on the third break point to hand the game to the American.

Pironkova fought hard to try and get back in the match. She took Williams to deuce in the next game and then clung onto her serve when the American put her under pressure in game three.

However, the Bulgarian struggled to make any inroads against Williams’ serve. This enabled the American to establish a 4-2 lead.

The World No.8 then hit a clutch of huge winners to break again and extend that lead to 5-2.