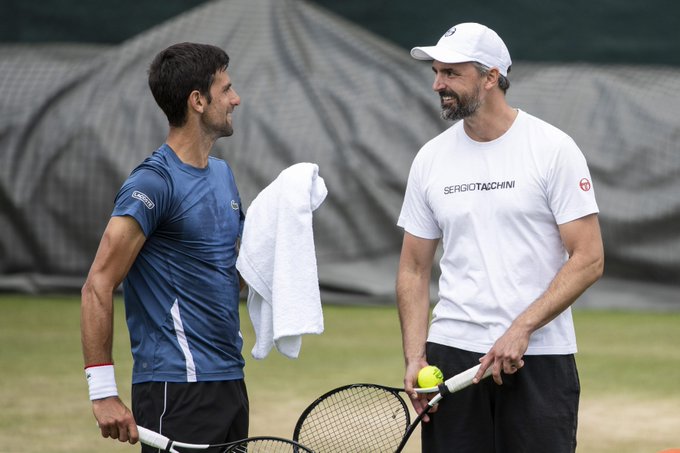 Goran Ivanisevic has criticised the disqualification rule in Tennis after Novak Djokovic’s fourth round exit at the US Open.

It was on Sunday, when Novak Djokovic’s dreams of an 18th grand slam title vanished after being defaulted for unintentionally hitting a line umpire in the face with a tennis ball.

As the Serb was broken in the eleventh game of the first set, he hit the ball towards the back of the court, looking the other way, and accidentally hit the line umpire in the face which caused a disqualification from the tournament.

Although it was unintentional from the world number one, the rules state that a major offence of ‘aggravated behaviour’ results in a default.

Although many people have come to the conclusion of agreeing with the decision, one person who thinks the decision was wrong was Djokovic’s head coach, Goran Ivanisevic.

The former Wimbledon champion has defended his player, slamming the disqualification rule in the process, “I haven’t seen the line umpire, but as soon as I’ve heard her sighing, I knew that was it,” Ivanisevic told Sasa Ozmo of Sport Klub in an interview.

“The tragedy of it is that Novak wasn’t angry at all. I have watched that video 3.877 times and his biggest mistake is that he wasn’t looking in that direction. I am not talking about Novak now, I am against disqualification in general.

“OK if there is intention and you want to harm someone, but this was a complete accident. I’ve seen that some wrote that the ball went 130 km/h. Those people are crazy. The rules are what they are, it’s either warning or disqualification.

“I know that many won’t agree and I am not objective, but I think they should have just given him the game penalty. Start from the second set and that’s it.”

In the interview, Ivanisevic also explained how Djokovic felt after the incident, “He was by himself for a while, and then we talked. It is not easy for him, it was huge shock that nobody expected,” the Croatian said.

“What I find tragic is that many people act like they were just waiting for him to do something wrong, there is a lot of maliciousness and a lot of people happy that someone else is in trouble. Some of the media are out to get him and I really don’t know why that is.”

It is quite clear that Ivanisevic feels that the rule should be scrapped in future incidents but many would disagree as Djokovic’s actions on another day could have resulted in more serious injuries.

There is also an argument to say that this isn’t the first time that Djokovic has been close to a default and his temperament always seems to get the best of him on the big stages.

However the Serb will look to put this behind him as he goes to Rome and then Roland Garros, as he looks to stop Rafael Nadal from winning an astonishing 13th French Open title.

Ivanisevic believes that the Serb is capable of winning the title in Paris as long as he can put this incident behind him, “Novak is a born champion and this will make him even stronger. It’s good that he plays matches sooner rather than later, to leave all of this behind him. He needs to try to act like this happened 5 years ago. I think he is capable of winning Roland Garros.”

There is not much rest, as Rome starts on Monday while Roland Garros is due to start on the 27th of September.

Related Topics:DjokovicGoran Ivanisevic
Up Next

US Open: Serena And Azarenka Put On A Show For The Ages