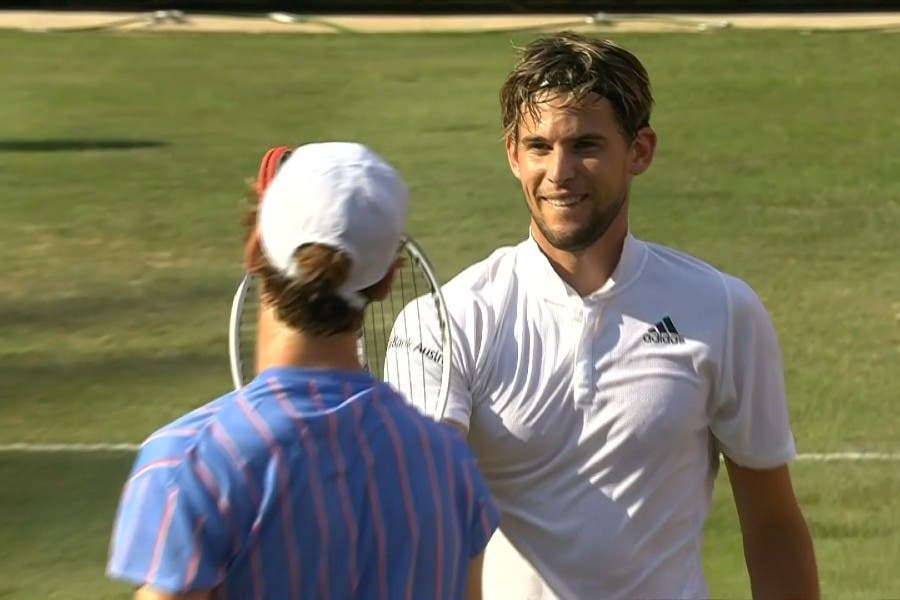 World number 8 Matteo Berrettini came back from one set down to beat 2019 Wimbledon semifinalist Roberto Bautista Agut 4-6 6-3 10-6 in the first semifinal of the Bett 1 Aces on grass at the Steffi Graf Stadium in Berlin.

Bautista Agut converted his second break point in the seventh game to take a 4-3 lead, as Berrettini hit his forehand into the net. The Spanish player saved two break points at 5-4 15-40 with two service winners before sealing the opening set 6-4 with an ace.

Berrettini, who reached the US Open semifinal in 2019 and won the Ultimate Tennis Showdown last week, did not face any break points in the second set and converted his second break point in the eighth game and held his serve at love in the ninth game to win the second set 6-3 forcing the match to the super tie-break. Bautista Agut took a 5-3 lead with a mini-break, but Berrettini rallied by winning seven of the next eight points to win the super tie-break 10-6.

Berrettini set up a final against Dominic Thiem, who beat Jannik Sinner 6-3 7-6 (7-5). Thiem converted his second break point in the fourth game and held on his serve to win the opening set 6-3 with a forehand winner.

Sinner saved a break point in the first game of the second set and two more chances in the 11th game to set up a tie-break. Sinner entertained the crowd at the start of the tie-break with a spectacular point despite slipping during the rally. Thiem edged his younger Italian rival 7-5, when the Italian teenager hit an unforced error.

“I think it was a pretty typical grass court match. Both of us served well. I am coming from clay, from high altitude in Kitzbuhel. It’s very different here. I tried to put the ball into the court with the good quality, because I did not have enough time to practice and get used to the baseline”, said Thiem.

Elina Svitolina beat Anastasija Sevastova 7-6 (7-2) 6-3. Svitolina earned the first break in the second game to open up a 4-1 lead. Sevastova broke back at love in the seventh game and held on his serve to draw level to 4-4. Both players traded breaks in the 11th and 12th games en route to the tie-break. Svitolina cruised through to a 7-2 win in the tie-break. Svitolina got an early break in the first game of the second set. Sevastova broke back in the sixth game to draw level to 3-3. Svitolina won the final three games with two consecutive breaks to seal the second set 6-3 with a forehand volley.

Svitolina set up a final match against twice Wimbledon champion Petra Kvitova, who beat Kiki Bertens 6-3 6-2. Kvitova will face Bertens for the seventh game in their careers and for the second time on grass. Kvitova won the first set 6-3 with a break at love in the second game. Bertens converted his third break point at deuce in the second game to open up a 2-0 lead. Kvitova broke serve three times in a row to win the second set 6-2.