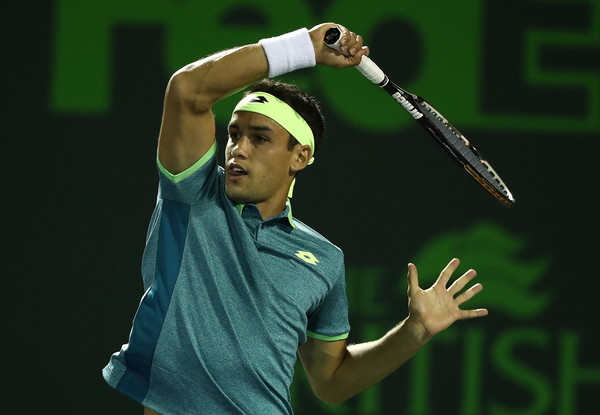 Nicolas Kicker has said that his goal is to break into the world’s top 30 when he resumes his career in 2021 after being suspended from the sport for violating anti-corruption rules.

The former world No.78 hasn’t played a competitive match since the 2018 Lyon Open. During the same year the Tennis Integrity Unit (TIU) found him guilty of breaking three rules of the anti-corruption programme. Including trying to contrive or attempt to contrive the outcome or any other aspect of any event, as well as failing to fully cooperate with officials. The breeches concerned two matches in Padova, Italy and Barranquilla, Colombia during 2015 on the Challenger tour.

Kicker’s penalty has recently been reduced by four months due to his cooperation with the TIU in their educational program. Including featuring in a video to warn other players about the dangers of match-fixing.

“I feel incredible relief; I was very uncertain because I did not know if the sanction was lowered or not. Now I already have an exact date to aim and I can set goals for myself in the short and long term,” the 27-year-old said in a recent interview with Pagina 12.

Describing the investigation into him as ‘horrible,’ the Argentine has expressed remorse for his actions. At the time of his suspension, Kicker was a consistent top 100 player and had recently reached the third round of the Australian Open in what was his best ever grand slam performance.

“We all make mistakes, some more serious and others not so much. But the most important lesson that all this left me is that you must always go with the truth and take care of those mistakes,” he commented.

In recent years tennis’ governing bodies have cracked down on match-fixing. A report published by the Independent Review Panel (IRP) said there was a ‘tsunami’ of corruption at lower level tournaments, but they found no evidence of a cover up by either the TIU or governing bodies.

Despite the crackdown, Kicker still believes the problem is a ‘very delicate issue.’ Lower ranked players are more at risk of being involved due to the disparity in prize money between the higher and lower ranked players. A gap the world of tennis is trying to bridge.

“First, they (match-fixers) always try to have contact through social networks. You have to be vigilant.” Kicker warns.
“They pose as sponsors, they take you into the conversation and promise you lies. I wish I had the solution to this problem but I think it is a very delicate issue. It is best to be very careful with the people who approach you, both on social networks and personally. And, above all, you have to be clear about your values ​​and not be fooled.”

Now nearing the last six months of his suspension, Kicker has said he is relishing the challenge of returning to the tour once again. He is yet to feature in the final of an ATP tournament. Although he has won three titles on the Challenger Tour.

“I think it will be a beautiful challenge for me; Luckily this time when I was out of the circuit I was able to train every day. I will come back better than before.” He said.
“The goal I have is to get into the top 30 in the world.”

Kicker is eligible to return to competition from January 23rd next year.

Related Topics:Nicolas Kicker
Up Next

Riccardo Piatti: “Jannik Sinner loves his sport and wants to be better”