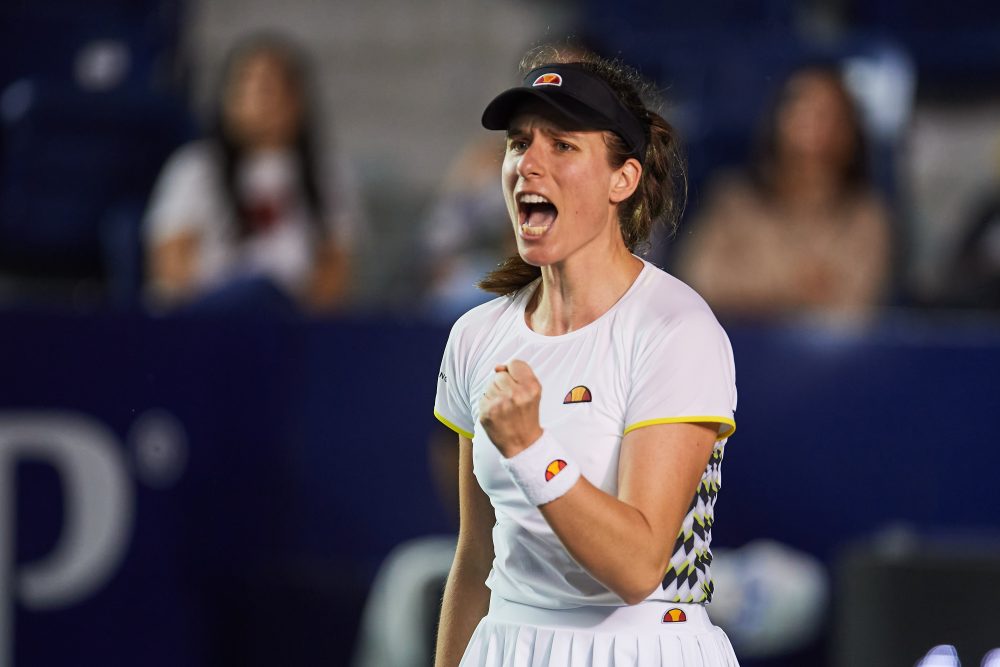 Second seed Johanna Konta has said it was a ‘privilege’ to play Kim Clijsters after seeing off her Belgian rival in straight sets at the Monterey Open on Tuesday.

The world No.16 rallied to a 6-3, 7-5, win over the 36-year-old. Earning her first tour victory this year after losing in the first round of three consecutive tournaments. Konta has been troubled by a knee problem in recent months and cut short her 2019 season due to the injury.

In her latest clash, the Brit was impressive behind her serve against the four-time grand slam champion. In total she won 80% of her first service points and didn’t face a single break point throughout the 86-minute clash. Konta broke Clijsters twice in the first set and once in the second.

“As a young player, I never thought I’d get to play Kim Clijsters in my career,” the 28-year-old said during her on-court interview. “I feel truly privileged and honoured to share the court with such a champion. It’s nice to have her back.”

Konta said she was impressed by the level of play her opponent is still able to produce on the court. A similar compliment to that of Garbine Muguruza, who also recently played Clijsters in Dubai. Clijsters was playing in only her second tournament since the 2012 US Open, which is coincidentally the same grand slam where Konta won her first main draw match.

“It was very tough. She’s an incredible ball-striker. Her ability to do things with the ball is what made her a multiple Grand Slam champion. It’s why she was able to come back and play, in her second match back after seven years, at a level like this. That’s not exactly an every day thing, that’s for sure. I feel so honoured to have played her, and really happy with my performance.” Konta said in tribute.

Clijsters, who is currently unraked on the tour, said there are still things she would like to improve further. Against Konta she won 68% of her first service points, but only 42% of her second. She is coached on the tour by Fred Hemmes Jr. A former top 200 player himself who has also previously worked with Ruben Bemelmans and the Belgian Tennis Federation.

“I felt some things were better,” Clijsters reflected during her press conference. “Some things still need a lot of improvement. That’s why it’s good to play matches.
“I’ve been through different generations and played many players throughout my whole career. I’m still at a stage where I want to focus on what I’m doing and how I’m feeling, and also start reading my opponents.
“It’s a process that I have to trust and keep working hard to improve in every match I play. I’d like to take big steps but I have to focus on small steps and improving day by day.”

Konta will next take on Germany’s Tatjana Maria. Maria knocked out last week’s Acapulco Open champion Heather Watson in three closely contested sets. As for Clijsters, her focus has now switched to Indian Wells where she has been awarded a wild card to play in the main draw.