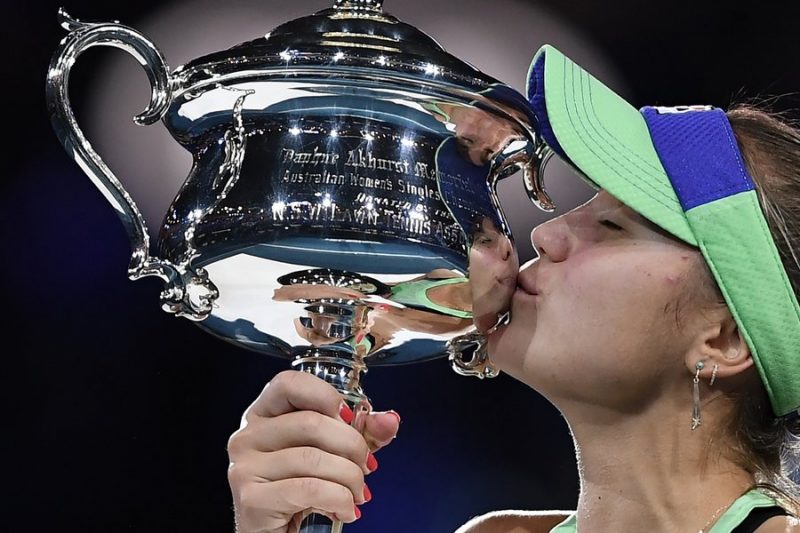 Sofia Kenin shone on one of the biggest stages in tennis as she fought back from a set down to beat Garbine Muguruza 4-6 6-2 6-2 and claim her first Grand Slam title at the Australian Open.

The American, 21, had never even reached a major quarter-final before the event. Now she is a champion and she will move up to World No.7 when the new rankings are released.

“My dream officially came true,” Kenin said in her winner’s speech. “I cannot even describe this feeling. It’s so emotional and I’ve worked so hard and I’m just so grateful to be standing here.”

The American continued, “These past two weeks have been the best of my life. I would like to thank my team and my dad. Thank you for making this possible. I can’t believe we’re here today.”

Kenin started brightly and won six of the first seven points. Then Muguruza settled down and fought back to hold serve in the second game.

In the next game, the Spaniard played a typically aggressive point to get to deuce. Then she punished a short ball with a cross-court winner to earn the first break point of the match.

The American saved it, along with another one a few points later. However, Muguruza eventually got the break when Kenin hit a forehand wide of the court.

The 14th seed tried hard to break back in the Spaniard’s next two service games. But Muguruza held firm to establish a 4-2 lead.

It looked as if the set would end quickly when Kenin fell 0-40 behind in game seven. However, the American refused to buckle. She saved four break points and went on to win the game.

Muguruza then gifted the 14th seed a break with one of the worst service games you are ever likely to see. She made two unforced errors and two double faults.

Kenin did not capitalise. She made two errors at the start of the next game and the Spaniard pounced. She hit a forehand winner to earn two break points, and then forced an error from the American with a deep volley.

Muguruza successfully closed out the set thanks to two unreturnable serves and a couple of errors from Kenin. 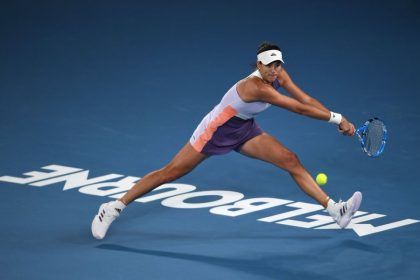 That first set was as good as it got for Muguruza. During the rest of the match, her performance steadily declined.

Meanwhile, Kenin got better and better as the match went on. She held to love twice at the start of the second set. Then she broke the Spaniard to move 3-1 ahead.

For the rest of the set, the American ran Muguruza ragged. She scurried around the court and made it very difficult for the two-time Grand Slam champion to dictate proceedings.

The Spaniard did not find an effective way to respond. She hit just three winners while making seven unforced errors in the last four games of the set. Consequently, Kenin broke her again and quickly wrapped up the set 6-2. 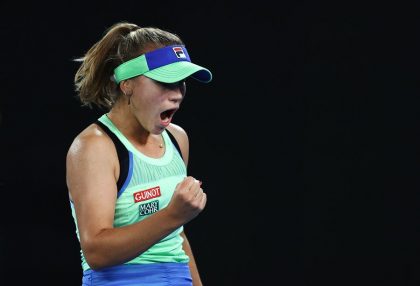 At the start of the decider, both players looked nervous. Muguruza made a series of errors, while Kenin struggled to play two good points in a row. In the end, both players held twice, and it was 2-2.

The fifth game of the set effectively decided the match. The Spaniard played aggressively to make it 0-40 on the American’s serve.

Then Kenin responded in outstanding fashion. She dragged Muguruza around the court on each of the next three points and finished all the rallies with clinical winners. Two points, the American secured the hold with a pass after the Spaniard unwisely chose to come to the net after a mid-court shot.

Muguruza seemed unaffected by that disappointment when she went 40-15 up in the next game. Then she fell apart. She made three unforced errors and a double fault to hand Kenin a priceless break.

The Spaniard suffered a similar collapse in what turned out to be the last game of the match. She hit two aces on her way to 40-15. Then she made two double faults.

The American earned her first match point with a backhand winner down the line. Muguruza saved it with a good serve. Then Kenin hit a cross-court forehand winner to earn another chance.

Appropriately, given her performance, the Spaniard made another double fault to gift the young American the point she need to achieve her dream of Grand Slam glory.