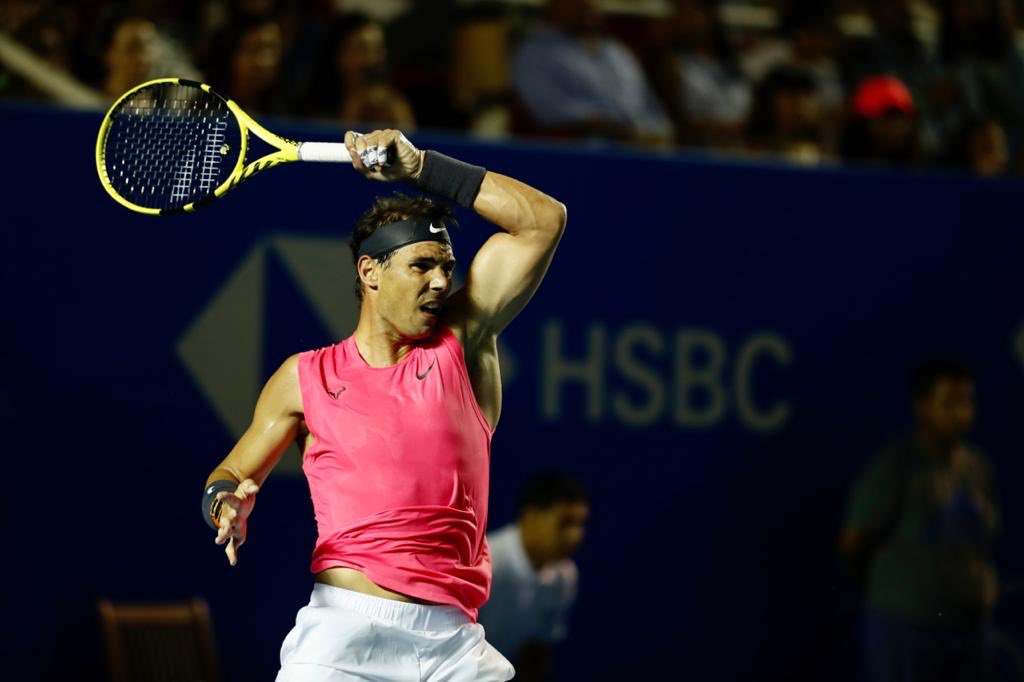 The 19-time grand slam champion dictated proceedings from the onset as he broke his rival twice in each set to score the 6-1, 6-2, victory. Hitting a total of 25 winners against 11 unforced errors. Despite the scoreline, the Spaniard was tested at times by the world No.76 during their encounter as he saved all eight break points he faced.

”The match has been much tougher than what the result said. I think it was a beautiful match to see,” atptour.com quoted Nadal as saying after. “It was a good match against a tough opponent. I think he’s going to have a very good tennis career.”

So far in the tournament, the 33-year-old has only dropped 15 games in total. Earlier in the week he also scored victories over Miomir Kecmanović and Pablo Andujar. The win-loss record of the two-time champion in Acapulco now stands at 18-2.

Awaiting Nadal in the semi-finals will be Grigor Dimitrov, who got a revenge win over Stan Wawrinka. Coming into the last eight of the tournament, Dimitrov has lost to his Swiss rival five consecutive times on the tour. He managed to end the losing streak with a 6-4, 6-4, victory to reach his first semi-final of 2020. The former grand slam semi-finalist said his victory was inspired by those previous losses.

”I’ve played quite a few times against Stan and we’ve practised together so many times. Between us, it’s mainly a mental battle,” Dimitrov said. “I had lost the past five times against him, but those losses have inspired me. Those losses helped me. Even though it hurts saying it, I’m admitting it. I wanted to stand tall tonight.”

Nadal has a one-sided head-to-head lead of 12-1 against his upcoming rival in Mexico. The only time he lost to Dimitrov was at the 2016 Beijing Open. Although he is taking nothing for granted.

”[Dimitrov] finished last year much better than how he had played the rest of that year. He started to play some good tennis and is showing it here, winning some very good matches,” Nadal said. “I’m going to need my best and I hope I’m ready to make it happen.”

In the other section of the draw, Taylor Fritz is experiencing his best run at a tournament since the Los Cabos Open in August after downing Kyle Edmund 6-4, 6-3. Despite a tentative start where he lost two out of his first three service games, he managed to gain momentum with the help of 11 aces as he won 74% of his first service points.

”When Kyle and I play each other, it’s all about who is going to get the first big shot in,” Fritz reflected on his win. “Even when I was nervous, I was telling myself to still go for my shots.”

The 22-year-old faces compatriot John Isner for a place in the final. Isner experienced a much tougher encounter on Thursday as he battled past Tommy Paul 7-6(3), 3-6, 6-2. The world No.20 is playing in Acapulco for the sixth time in his career and is yet to reach the final.

”I’m expecting a really good match. Taylor is confident every time he takes the court,” Isner previewed. “He’s an absolute gamer and I respect the heck out of him. He straps on his shoes and goes to battle.”

Isner lost to Fritz earlier this year at the ASB Classic in Auckland, but leads their head-to-head 2-1.