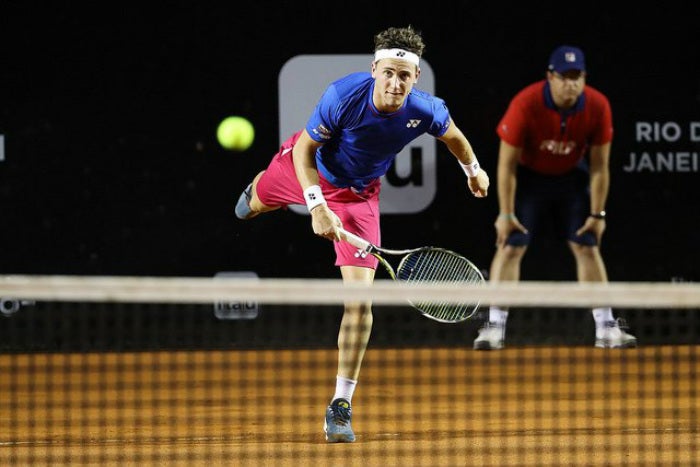 Next Gen star Casper Ruud has become the first player from Norway to win a title on the ATP Tour after easing to a straight sets victory at the Buenos Aires Open on Sunday.

The 21-year-old rallied to a comprehensive 6-4, 6-1, win over Pedro Sousa in just 71 minutes. Sousa, who also created some history for his country by becoming only the third Portuguese man to contest an ATP final in the Open Era, received a bye in the semi-finals following the withdrawal of top seed Diego Schwartzman. Throughout the final Ruud was impressive behind serve as he won 84% of his first service points and didn’t face a single break point. Unlike his rival who he broke twice in the opening set and once in the second.

“Buenos Aires will always be a special place for me, especially now after my first win here.” The rising star said afterwards.
“Now I will enjoy the last hours in Buenos Aires as much as I can, then I have to catch the flight to Rio (Open) for it is a new week tomorrow.’
“The show must go on”, next week I have to be ready again, so I want to celebrate tonight, but nothing more than that, says Ruud just after the win.”

Becoming the fourth player born in 1998 to win an ATP title, he paid tribute to his rival following their clash in the final. Sousa, who only managed to enter the tournament thanks to a lucky loser vacancy, was playing in his first ATP title match at the age of 31. The world No.145 looked at times to be struggling on the court with heavy strapping around one of his calves.

“First of all, I would like to congratulate Pedro, his team and his coach, Ruben. I know them well, I’ve trained and played a lot with them over the last three or four years. So it’s very nice to see you (Pedro) take big steps and do a good job. I hope to meet you for many more years. I’m still young, so like I said, I hope to meet you for many more years.” Rudd said during the trophy presentation.
“I also want to thank my team, my coach this week, Pedro and my physical coach Marcel, who has helped me a lot. Without them, it would have been very difficult for me to come here and play the way I do.”

During his time in Argentina, Ruud dropped just one set in five matches played this week. Doing so against Juan Ignacio Londero on Saturday. His maiden ATP title comes after what has been a mixed start to 2020. After scoring wins over John Isner and Fabio Fognini at the ATP Cup, he lost his opening matches at the next two tournaments.

As a result of his latest triumph, Ruud will rise to No.34 in the world rankings on Monday. Becoming the highest ranked Norwegian player in history. The previous record was held by his father, Christian, who peaked at 39th back in 1995.

“It is absolutely fantastic, I have no words. This is a great top for us, for Casper and for the team and everyone who has been waiting for this for several years.” The director of the Norwegian Tennis Federation Øivind Sørvald told nrk.no.
“One thing is to go a few rounds in a tournament, but to play through four rounds to the finals and win it, that’s a huge feat,” he added.
“This is one of the biggest sports in the world, and when you win a tournament, you have marked yourself well and are noticed.”

Related Topics:Casper Ruud
Up Next