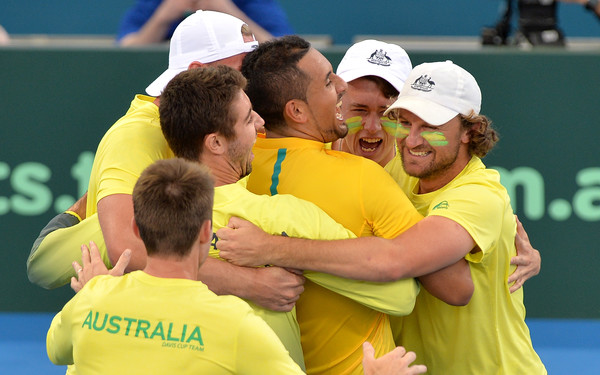 Australia’s chances in their upcoming Davis Cup tie has taken a knock after their top two singles players ruled themselves out of the competition due to injury.

World No.23 Nick Kyrgios has pulled out due to a wrist problem that also saw him retire from his first round match at the Mexican Open earlier this week. Kyrgios hasn’t been able to play a full match on the tour since his loss to Rafael Nadal in the fourth round of the Australian Open last month. He recently took a swipe at fans in Mexico after being booed off the court following his retirement from the competition, where he was aiming to defend the title he won 12 months ago.

‘I’ve been dealing with a bit of a wrist injury, obviously, for the last couple of weeks,’ said Kyrgios. ‘After the Australian Open I took like a week and a half off and then I started hitting again, I started feeling my wrist.
‘I didn’t play last week in Delray, still came here, thought I would be able to play, but my wrist is not ready to play. I can feel it on every backhand.
‘It’s unfortunate, you know. After the memories I had last year it was tough for me to come here and pull out.’

Kyrgios was also forced to pull out of his country’s quarter-final clash with Canada last November due to a collarbone injury.

Another notable absentee will be Alex de Minaur, who is ranked just two spot below his compatriot in the ATP rankings. Minaur is out of the team after aggravating an abdominal injury. An issue which forced him to miss the first grand slam of 2020. The 21-year-old returned to competition this week, but lost his opening match to Miomir Kecmanović.

“Both guys wanted to be named (in the team) hoping that they would be fine to play,” Australian captain Lleyton Hewitt told reporters.
“But as it has turned out, with Nick pulling mid-match, he has been struggling for a couple of weeks.
“And Alex, as that first match went on, he had probably come back a week or two too soon.”

Commenting further about Kyrgios, Hewitt said he believed he will be out of action for roughly another two weeks. At present, he is still down to play at the Indian Wells Masters, which begins on March 9th.

“For at least the next week, two weeks, he shouldn’t be picking up a racquet,“ he said.

Australia will play Brazil on home territory in Adelaide. It will be the first Davis Cup clash between the two countries 2001. Whoever wins will progress to the 18-team weeklong finals in November.