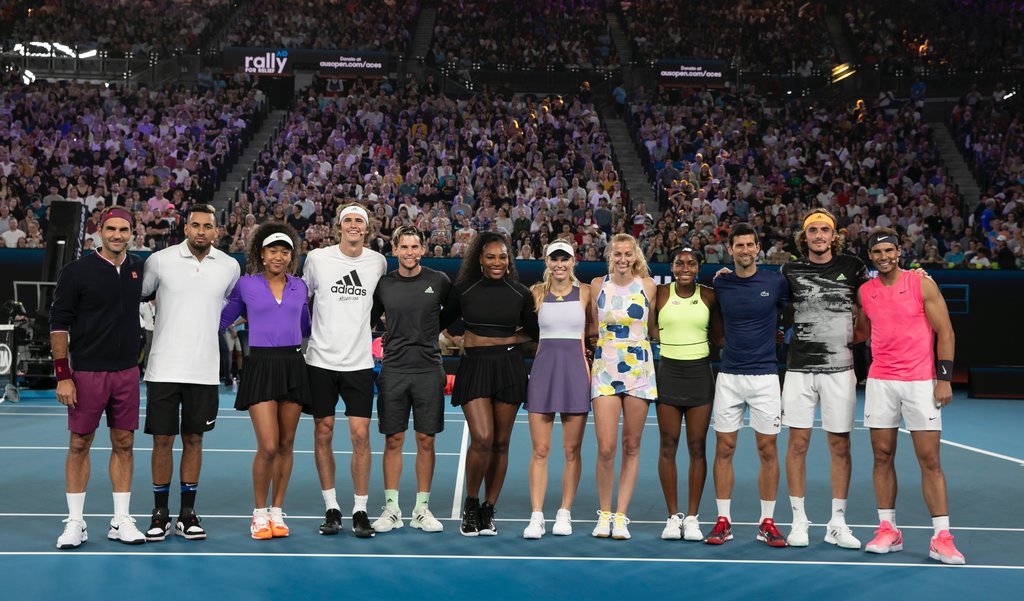 Players taking part in Rally for Relief (image via twitter.com/ausopen)

Roger Federer, Novak Djokovic and Serena Williams were just some of the high-profile names that graced their presence at a huge fundraiser at Melbourne Park on Wednesday.

Organised by Tennis Australia, Rally For Relief was created to help raise money for those affected by devastating bushfires that has caused havoc in the country since September. 28 people have been killed and an estimated 2000 houses destroyed. In New South Wales alone 4.9m hectares of land have been burned. An area bigger than the total size of Denmark.

The star-studded event saw Williams and Caroline Wozniacki head up the teams as the player’s engaged in some light-hearted competition. With players teaming up in pairings to play doubles and switching after each game. Victory was secured by Rafael Nadal and Djokovic, who won the decisive game over Stefanos Tsitsipas and Alexander Zverev to hand team Williams the 4-3 victory.

However, the event was never about the quality of play on the court. It was the reason why they were there to begin with. Following his time on the court, world No.1 Nadal revealed that he and Federer have both decided to donate a quarter of a million between them.

“Talking with Roger a couple of hours ago we have decided to give $250,000 to the fund together.” Said Nadal.
“Hopefully we keep inspiring people to fight this terrible disaster that we are going through and I hope it helps cover all those things we (those affected by the fires) need.”

Following the doubles, 38-year-old Federer took to the court in what was his first match of any sort played on Australian soil this year after skipping the ATP Cup. His opponent was Nick Kyrgios, who has been credited as the driving force behind the fundraisers. The former top 20 player tweeted to Tennis Australia earlier this month urging them to take action.

“It’s been an emotional past couple of weeks. Through the ATP Cup that was practically why I was playing so hard. I just wanted to send a message.” Kyrgios said.
“Back home when I was in Canberra, I couldn’t even go outside. It was emotional.’
“I’m just so happy that we had Roger, Rafa and Novak, who are some of the greats to get behind it.” He added.

Kyrgios was the player who started the trend of donating to the bushfire appeal for every ace he produced over the Australian summer. Pledging $200 per ace, he raised $13,800 at the ATP Cup last week alone.

“I’m playing Kooyong and I’m going to do that as well.” He stated.
“It’s gonna happen for as long as I can do it. Maybe further when I’m on tour travelling (outside Australia).”

It would be Federer who was victorious in his one-set clash with Kyrgios after clinching the tiebreaker 8-6. The 20-time grand slam champion describes the current situation as ‘difficult’ after speaking with those affected.

“As you get it through the news you never really know how bad it really is. But then you hear more and more about it, get a sense that it is really bad.” Federer said.
“Then you get down here (to Australia) and speak with the people who have been affected. It’s been difficult.’
“You wish this doesn’t happen in your country. In Switzerland we’re lucky that we don’t have these extreme situations.”

Prior to Rally for Relief, the aces fundraisers had generated just over AUS$400,000. Following the event, the organisers announced that the event had helped the tally rise substantially to AUS$4,826,014.
For more information on how tennis is raising money for those affected visit https://ausopen.com/aces.

Related Topics:2020 Australian Open
Up Next