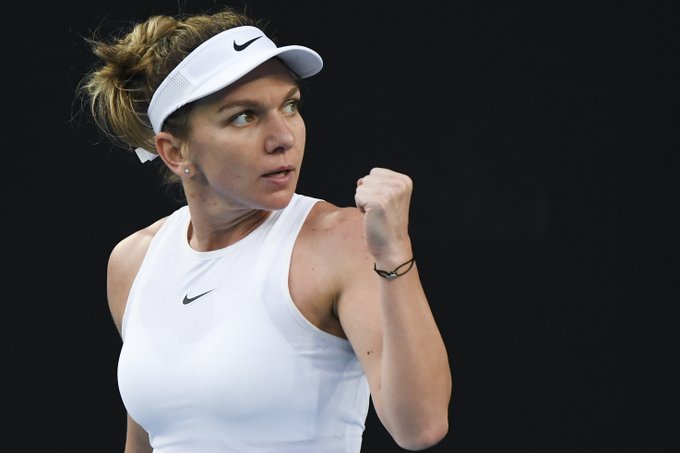 Fourth seed Simona Halep has said there is ‘nothing dangerous’ about her wrist after she awkwardly landed on it during her first round match at the Australian Open.

The reigning Wimbledon champion suffered a couple of falls throughout her at times tricky 7-6(5), 6-1, win over America’s Jennifer Brady. The person who stunned world No.1 Ash Barty in Brisbane earlier this year. During the first set it appeared as if the two-time grand slam champion hurt her right wrist following a fall. In the immediate aftermath, she had heavy strapping put on it.

“A little bit sore, but nothing dangerous at this moment. So I will see tomorrow morning after I wake up.” Halep commented on her wrist.
“I don’t know why in the first round I always fall down. Maybe it’s a good sign. Let’s hope for that.” She added.

Despite the scare, the 28-year-old managed to secure a place in round two with the help of a dominant 27-minute second from from her. Producing 20 winners and winning 65% of her service points. Making it her 20th main draw match win at the Australian Open since 2011.

“I had just to push her back as much as possible, to make her run, playing a little bit both sides. I served pretty okay. And after that very tough set, in the second set I’ve been more relaxed. I’ve been a little bit more aggressive. I tried to finish some points, which I did.” She commented on her latest performance.

As one of a group of former grand slam champions in the women’s draw, Halep is among the favourites to lift the Melbourne title. Although she dismisses the theory that her previous triumphs place her on a stronger footing for her current tournament. On the women’s tour the last 12 major tournaments have been won by 10 different players. During that period Halep and Naomi Osaka are the only to have won multiple titles.

“It’s just a big, huge thing that I could win Wimbledon. For myself, it’s huge. But normally in life, it’s the same.” She explained.
“I had confidence before Wimbledon because I won the (2018) French Open, I won so many titles. So I don’t stay related to one tournament about the confidence. The confidence is coming with the matches. I feel good on the court now.”