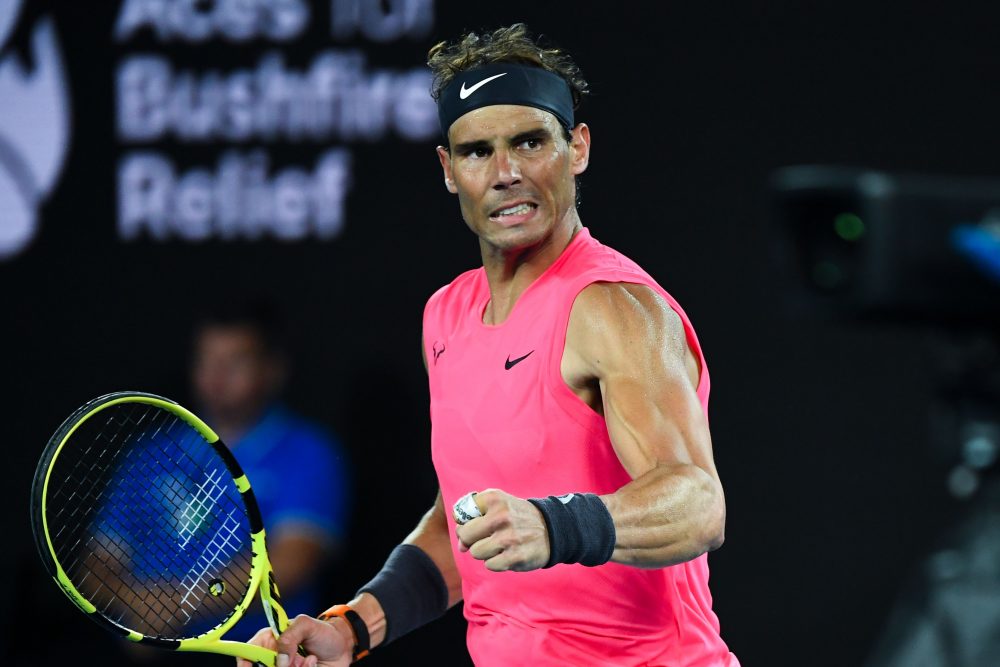 World No.1 Rafael Nadal is through to the quarter-finals of the Australian Open after battling his way past a determined Nick Kyrgios on Monday.

The highly anticipated showdown lived up to expectations as Nadal rallied to a 6-3, 3-6, 7-6(6), 7-6(4), win over the former top 20 player. Emulating his four-sets win over Kyrgios that occurred in the second round of Wimbledon last year. In their latest clash, both players illustrated glimmers of their best tennis as they battled through their nerves. Although it was Nadal who came out on top in their latest encounter.

“It has been a very tough match. It seemed like at the beginning I was in control a little bit, but against Nick you are never in control because if you make a mistake like I did during the second set he has the break and  it is so difficult to break him.” Nadal said during his on-court interview.

Historically the relationship between the player’s have been far from straightforward. Nadal has previously criticised Kyrgios for his at times controversial behaviour on the tour. Meanwhile, Kyrgios once accused him of being a ‘super salty loser.’ Although both have since played down their spat. There would be no further breakdown in relations during what was a relatively peaceful clash on Monday evening in Melbourne. The 222-minute showdown saw the top seed hit 64 winners to 27 unforced errors. Compared to Kyrgios’ tally of 50 and 43.

With a place in the quarter-final of a grand slam at stake, Kyrgios began his quest with a touching tribute. Taking to the court for his showdown, he walked into the arena wearing an LA Lakers top in memory of Kobe Bryant. The NBA superstar who was killed on Sunday in a helicopter crash at the age of 41.

“He always wanted more, he always wanted to increase his level. He was an inspiration for the world of sport. Kobe Bryant will be in our hearts and our minds for the rest of our lives.”

Early on Kyrgios looked lethargic on the court and lacked intensity in his shot-making. Enabling the world No.1 to break four games into the match and subsequently take the first set with relative ease.

Despite taking an early stronghold, Nadal soon came under pressure from the world No.26, who he lead 4-3 in their head-to-head prior to their latest clash. Kyrgios’ turn to strike saw him elegantly hit a winning forehand shot to break for a 3-1 lead in the second frame. Gaining in momentum and raising the decibel levels around the Rod Laver Arena, he went on to level the match by closing the second set with two consecutive aces out wide.

Nadal is no stranger to fighting back against Kyrgios after dropping a set during two out of his four previous wins over him. Despite Nadal’s list of achievements that include a record 12 French Open titles, he struggled to tame his fiery rival. The third set was a cat and mouse chase will no breaks of serve heading into a crucial tiebreaker dominated by nerves.

The top seed looked to be in full control of the tiebreaker with a 4-1 lead in his favour. However, a forehand shot into the net from Nadal enabled Kyrgios to break back and eventually draw level at 5-5. The drama didn’t stop there. A Kyrgios double fault handed the Spaniard set point and a chance to restore his lead.  Something Nadal failed to do after he also hit a double fault. Nevertheless, he prevailed on his second opportunity with the help of a forehand shot from his rival slamming into the net. Making it the third consecutive time Nadal has won a tiebreaker against Kyrgios on the tour.

After issuing his latest blow to Kyrgios, the 33-year-old rapidly gained in momentum against his faltering rival. Three games into the fourth set, a lacklustre service game from Kyrgios enable him to break for only the second time and extend his lead further.

However, there would be another twist to the match. Serving for a place in the last eight at 5-4, a tense Nadal faltered at the worst possible moment. Handing the break back to Kyrgios. A true testament to the resilience he demonstrated throughout. With all to play for it would be another tiebreak that would separate the two. Which Nadal eventually prevailed in after a Kyrgios forehand slice ploughed into the net to secure his victory.

“He played a good game. I played a scary game when leading 5-4 (in the fourth set).” Nadal reflected after.
“That’s part of the game. I accept that and I tried to recover mentally. I tried to find again the level of tennis before the tiebreak.”

Through to the quarter-final of a major four the 41st time in his career, Nadal paid tribute to Kyrgios’ performance. Publicly encouraging the controversy-hit player to maintain his commitment to the sport.

“When he’s playing today with a lot of positive attitude he gives a lot of positive things to our sport.” He said.
“I encourage him to keep working like this because he is one of the highest talents that we have on the tour and I like this Nick Kyrgios during the  tournament.”

Nadal, who hasn’t won the Australian Open since 2009, is through to the last eight in Melbourne for the 12th time in his career. His reward will be a showdown with Dominic Thiem, who downed Gael Monfils in straight sets earlier in the day.

“It will be tough. We know each other very well.” Nadal said of Thiem.
“He’s a great fighter and hits the ball very strongly. I’ve seen him play very well (against Monfils) so it’s going to be a tough one.”
“I know I need to play my best but I really believe I am moving in the right direction.”

Nadal leads Thiem 9-4 in their head-to-head.