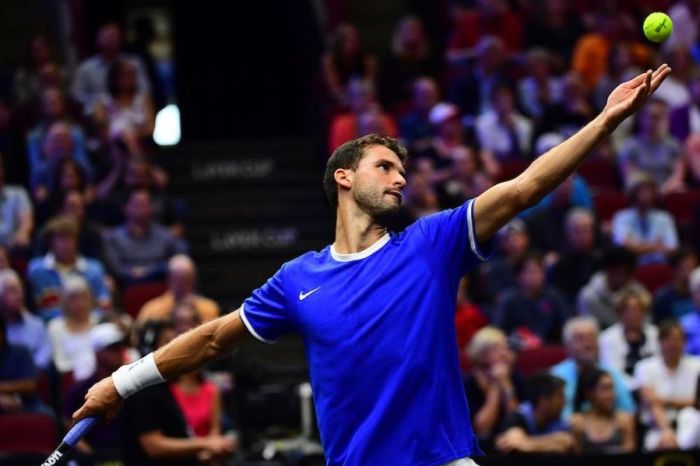 The ongoing Australia bushfires continue to affect tennis tournaments with Grigor Dimitrov describing the conditions as ‘not present’ during his country’s latest clash at the ATP Cup.

The world No.20 help Bulgaria secure their second win in the team event with a 2-1 triumph over Moldova, who was the last country to qualify. After teammate Dimitar Kuzmanov won his first ever ATP match against Steve Darcis, Dimitrov managed to secure Bulgaria’s victory. In the singles he eased to a 6-2, 6-3, win over Radu Albot where he impressively only dropped five points behind his first serve and converted four out of his six break point opportunities. However, in the final doubles match, Dimitrov and Alexandar Lazarov fell in straight sets.

“I just had to build up the team a little bit for today, and after that it was just all about the game,” Dimitrov told atpcup.com. “I think Dimitar did a great job this morning. Obviously it was a good match on his end. And then I had to make sure I stayed strong throughout the whole match today. That was good.”

The Ken Rosewall Arena failed to cover up the noticeable haze troubling the event due the bushfires. In his singles match, Dimitrov said he noticed that it was getting ‘foggier’ in the second set. According to The Sydney Morning Herald, the air quality rating at 15:00 on Sunday was 150 on the Air Quality Index. The official advice was against exercise outdoors, but it didn’t have any affect on the tournament.

“Obviously I’ve seen it a little bit more now [after the match] – it’s definitely not pleasant,” he said. “I even noticed [the smoke haze] this morning when we were going to warm-up, the court was a little more dustier than it was the previous days. It is what it is … we can control only what we can.”

Besides playing on the court, the ATP Cup is also a learning curve for Dimitrov. Who also has the responsibility of being the team captain in what is a new role for him. Asked why he decided to do the double duty, the former Wimbledon semi-finalist said he wanted to give something back to his country.

‘‘I think, you know, my dad was the one who told me how to play tennis, and when I was chosen to be a captain, he was, like, ’Oh, now you’re going to see what is it to be on the other end’,’’ Dimitrov explained.
“I never thought I could do a double role, but I took this on board. I wanted to give something back to the boys and make sure they learn.”
“I think coming into this thing, I knew that if we come together, we’d have a great opportunity. I know I have to not only believe in myself now but I need to believe in the players that are with me.”

After two ties, Bulgaria have won four out of their six matches played. Placing them in a strong position to reach the knockout stages of the tournament. An impressive outcome for a team where Dimitrov is their only player ranked in the world’s top 400. Their final group tie will be against Belgium on Tuesday.