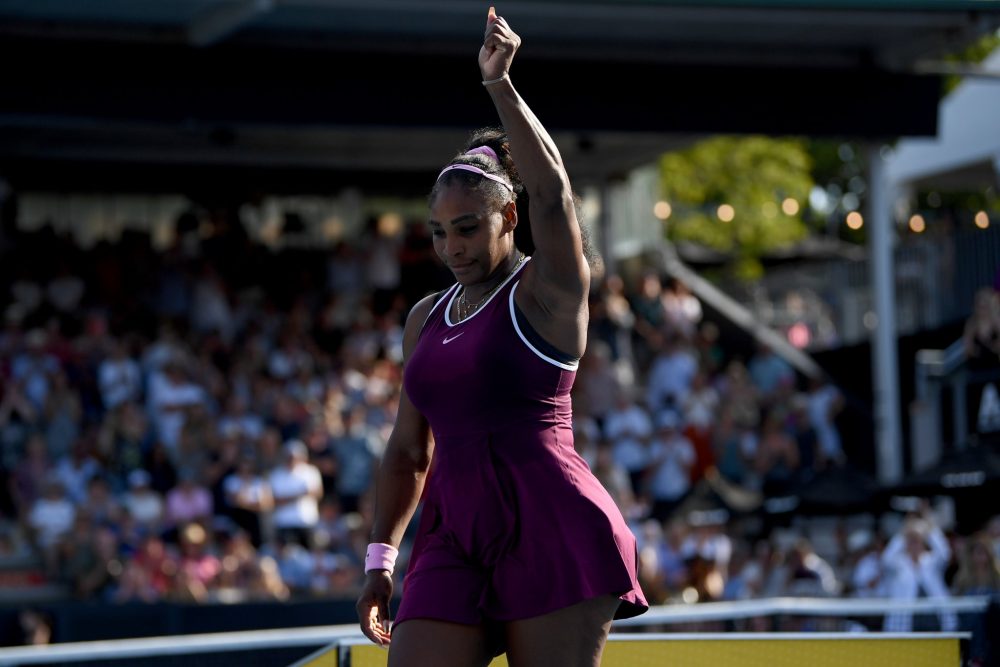 Serena Williams at the 2020 ASB Classic (image via twitter.com/wta)

Former world No.1 Serena Williams has returned to the winner’s circle for the first time since 2017 after roaring her way to a straight sets a win at the ASB Classic in Auckland.

Williams, who hadn’t won a title of any sort since becoming a mother, rallied to a 6-4, 6-4, win over compatriot Jessica Pegula in what was their first tour meeting. After dropping her serve in the very first game of the match, the top seed remained unbroken for the reminder. Although it was a far from simple encounter for the American, who converted only three out of her 15 break point opportunities during the 96-minute clash.

“It feels good, it has been a long time,” Williams said afterwards. “I played an incredible opponent in Jessica and honestly it was a great match.
“I was definitely improving as the week went on and I needed to because I had some tough matches. I played every day and I’m playing still, I’ve got another match.
“I feel fortunate and blessed to be out here and to be healthy and to play. I have been playing for so long and been through so much and I’m happy to be doing something I love.”

The triumph is Williams’ 73rd WTA title and first in New Zealand. She has now won titles in four different decades, dating back to her maiden trophy back in 1999. It also breaks her snap of losing five consecutive finals since making her comeback from the birth of first daughter. Four out of those five previous finals was at grand slam tournaments.

Serena Williams’ win in Auckland makes it FOUR decades of being a champion.

Meanwhile, world No.82 Pegula exits Auckland with her head held high. Unseeded in the tournament, she knocked out Caroline Wozniacki en route to only her third WTA Final at the age of 25. Pegula is yet to win back-to-back matches at a major tournament.

“You are an amazing champion. It has been so fun to step on the court with you today.” She said in tribute to Williams.

There was no double celebration for Williams in the doubles after her and partner Wozniacki fell in straight sets. The duo, who was playing together on the tour for the first time, fell 6-4, 6-4, to Asia Muhammad and Taylor Townsend.

In the aftermath of her victory, the 38-year-old revealed that she will donate all of her prize money earned from the tournament to the Australian bush fires appeal. At least 28 people have been killed by the fires and thousands of homes have been destroyed.

“I’ve been playing in Australia for over 20 years and it’s been really hard for me to watch all the news and everything that has been happening in Australia with all the fire and … animals and people that have lost their homes,” she said.
“I decided at the beginning of the tournament … I’d donate all my prize money for a great cause.”

Williams’ donation is the latest from a tennis player. Nick Kyrgios, Simona Halep and Alex de Minaur have all pledged to donate a set amount of money for every ace they hit during the Australian summer. Novak Djokovic and Maria Sharapova have donated $25,000 each. Meanwhile, Tennis Australia has organised a series of fundraisers over the coming weeks.

As a result of her win, Williams will rise to ninth place in the rankings on Monday. Meaning that she will have a top eight seeding for the Australian Open due to the withdrawal of Bianca Andreescu on Saturday.

The list of upsets in the women’s draw at the Australian Open grew ever longer as Karolina Pliskova and Belinda Bencic lost. 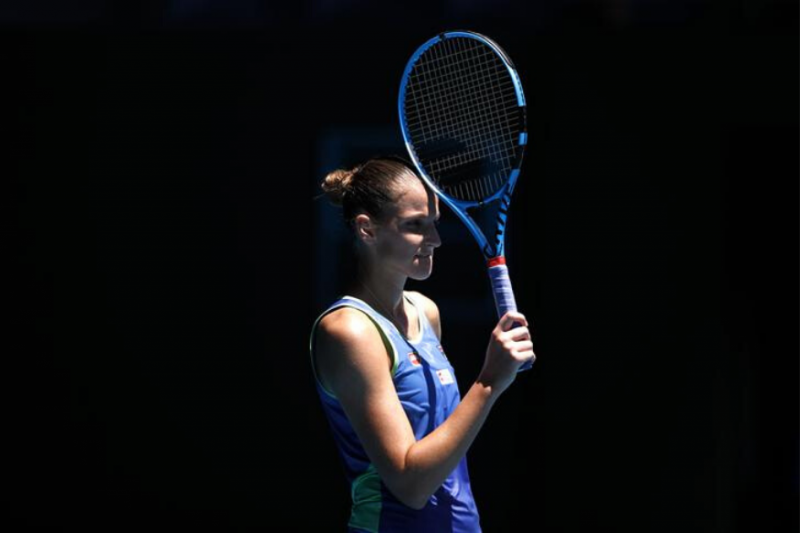 It was all going so well for the seeded players in the Women’s Singles at the 2020 Australian Open. 21 of them made it through to the last 32. And, for the first time since 2007, that contingent included all of the top ten.

Then the third round began on day five and all hell broke loose. First, 8th seed Serena Williams lost to Wang Qiang. Then 10th seed Madison Keys was defeated by Maria Sakkari. And, as if that was not already enough for one day, 3rd seed and defending champion Naomi Osaka was knocked out by Coco Gauff.

It is now day six, and 2nd seed Karolina Pliskova and 6th seed Belinda Bencic have joined the list of high-profile casualties in round three due to losses to Anastasia Pavlyuchenkova and Anett Kontaveit respectively.

The Czech, 27, competed very strongly with her Russian opponent throughout. She matched her in almost every department, and both sets of the match went to a tie-break.

However, Pavlyuchenkova outgunned Pliskova in both tie-breaks with some impressive ball-striking as she hit a series of winners to earn a 7-6(4) 7-6(3) victory over the 2nd seed.

Bencic has a day to forget

Bencic experienced something of a waking nightmare. She made ten unforced errors and won just ten points as she lost the first set 6-0 to Kontaveit in just 21 minutes.

The second set started in a similar fashion. The Swiss lost the first three games and faced the embarrassing prospect of joining the list of players who have suffered a 6-0 6-0 loss in a Grand Slam if she did not get her act together.

Then Bencic finally won a game to make it 3-1. After that, she competed much better with the Estonian for the remainder of the match. But of course, by then it was much too late. Kontaveit completed a dominant 6-0 6-1 win in 49 minutes.

Donna Vekic was due to meet the Swiss in the fourth round if both players made it that far. Ultimately, neither did, as the Croatian also sustained a surprising loss when she went down 7-5 6-3 to 18-year-old rising star Iga Swiatek.

The defeats of Pliskova and Bencic mean that five of the top ten have now departed from the draw at the last-32 stage. 5th seed Elina Svitolina and 9th seed Kiki Bertens play this evening. Will they survive or will they join the ever-growing list of top players that have suffered unexpected exits? 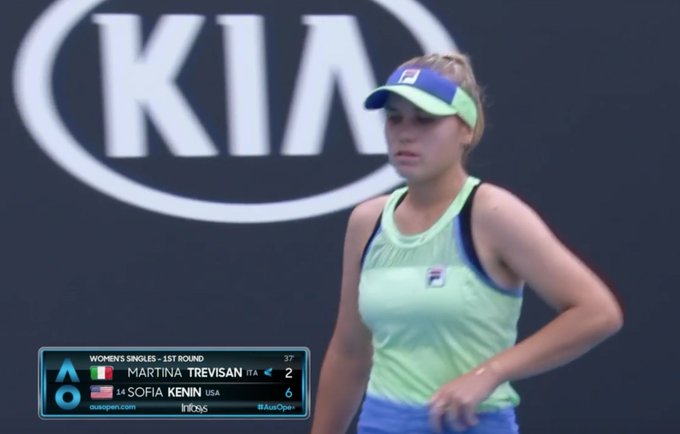 Number 14 seed Sofia Kenin battled past China’s Zhang Shuai 7-5 7-6 (9-7) in a late-night hard-fought match to book her spot in the Australian Open fourth round against Cori Gauff.

Kenin reached the third round for the first time at this tournament without dropping a set. The US 21-year-old player fought back from a set point down twice in the opening set. She went down a break early in the second set before taking the tie-break.

Zhang went up a 3-0 lead in the opening set and saved five break points in a hard-fought fifth game.  Kenin broke back with two forehands to draw level, as Zhang was serving for the set. The US player completed the come-back by winning five consecutive games from 2-5 down to win the opening set 7-5.

Both players traded breaks twice in the second set en route to the tie-break. Kenin earned a mini-break on the ninth point before winning the tie-break on the third match point to set up a fourth round match against Cori Gauff, who beat defending champion Naomi Osaka.

“It’s late, but I am happy to have gone through and I am really excited. I was just fighting. There were a lot of close shots, so I needed to step up my game and I am so proud of myself. I was not aware that I was playing Gauff. She is playing really well. She had a great 2019 season. I am going to enjoy the moment right now”, said Kenin.

The reigning French Open champion explains why she doesn’t consider herself the frontrunner in Melbourne. 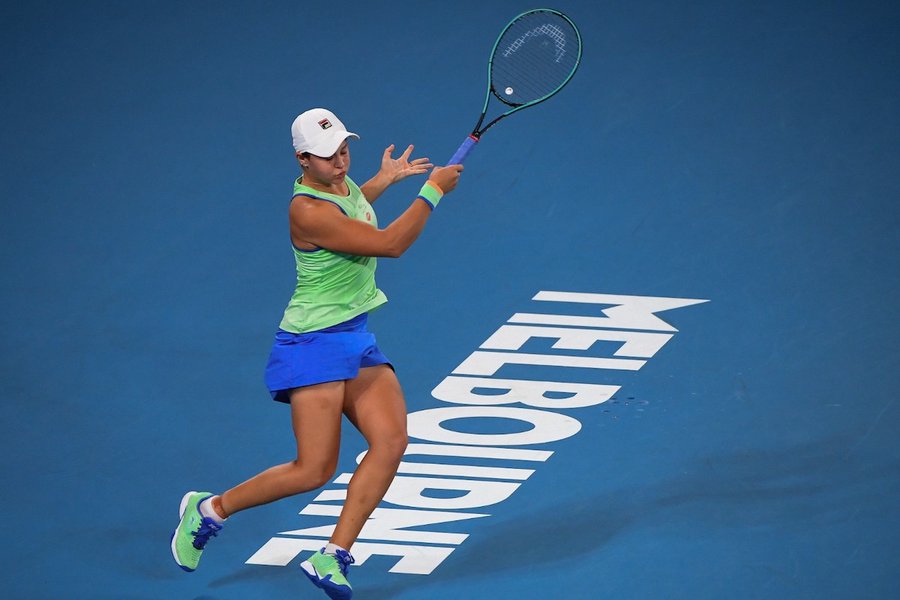