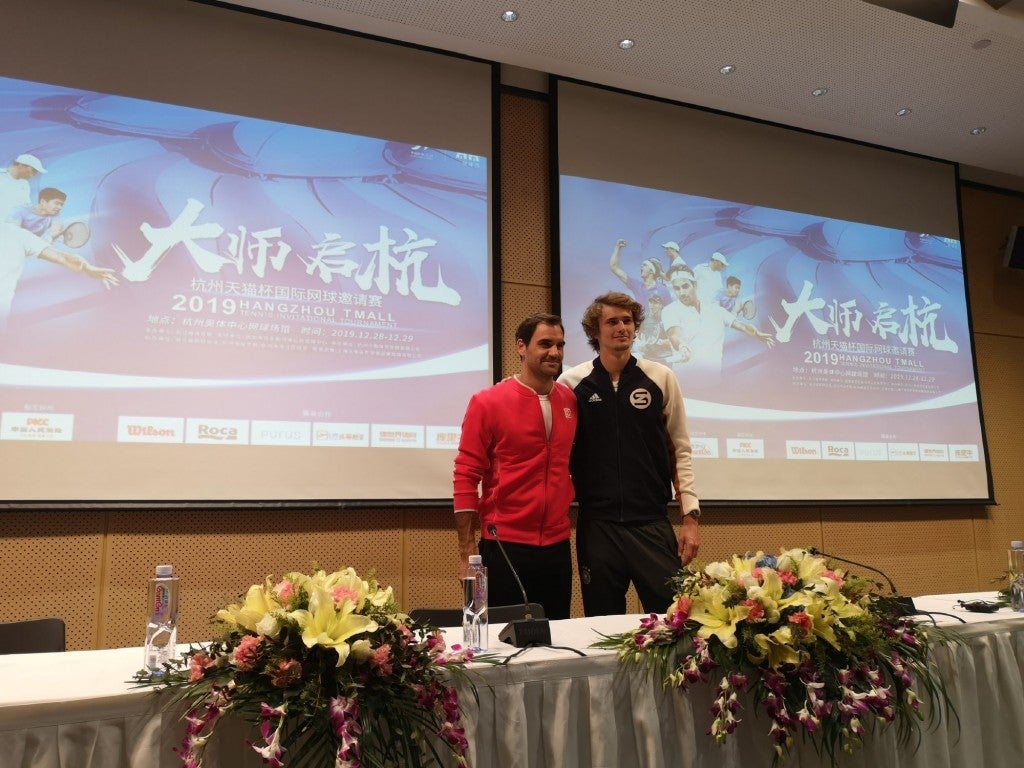 Roger Federer beat Alexander Zverev 6-1 6-7 6-2 in an entertaining exhibition match at the Hangzhou Tmall Cup in the final event of the year one day after losing the doubles match to Mike and Bob Bryan 7-6 7-6. Federer and Zverev met for the fifth time in the past 40 days. During the recent tour in South America Federer won three exhibition matches in Santiago, Mexico City and Quito, while Zverev beat his Swiss rival in Buenos Aires.

Federer has signed up to play in Hangzhou until 2023. The Swiss Maestro will start his 2020 season at the Australian Open. Zverev will open the new season at the inaugural edition of the ATP Cup next week.

Federer won four titles in Dubai, Miami, Halle and Basel and missed two match points in the epic Wimbledon final against Novak Djokovic. He lifted a total of 103 ATP titles during his career.

Lucas Pouille signs up to play in Dubai next February

Daria Kasatkina talked about her new racket after improving her form ahead of Roland Garros. 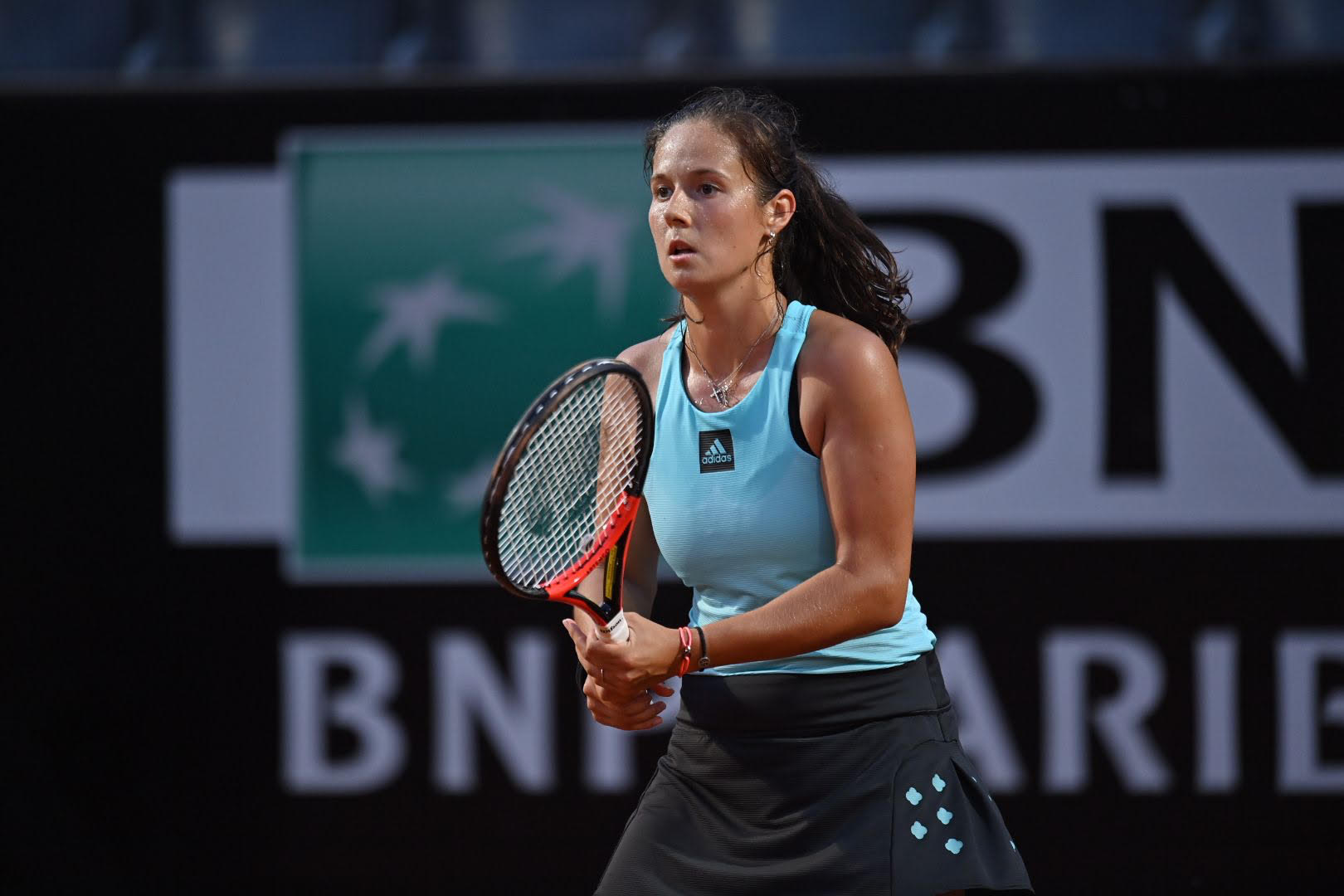 Daria Kasatkina has given praise to her new racket after finding her form ahead of Roland Garros.

The Russian heads into the second grand slam of the season in some form after reaching the semi-finals in Rome.

Kasatkina reached her first semi-final at WTA1000 level since Sydney in January and has been having a good and progressive season.

The world number 20 defeated the likes of Leylah Fernandez and Paula Badosa on her way to the last four as she heads into Roland Garros with confidence.

After her quarter-final match in Rome UBITennis had the chance to ask Kasatkina about her new racket and how she found out about the Artengo brand, “I don’t know the player, first of all. Second of all, I fall in love with this racquet first time I took it,” Kasatkina admitted.

“It was last pre-season. I was trying racquets. This one was like a blind testing. I didn’t know what was the racquet. It was just a black frame. I tried it and I was like, What the… What is this? I was playing on the baseline, trying all the shots, all the strokes. I was like, What is this racquet?

“When they tell me the brand, I was like I thought they were making fun of me. I didn’t even know that this brand exist. They told me, If you like the racquet, take it, which I did. I’m really happy with the way this racquet is. I’m happy how I feel on the court with the racquet. This the most important because in our sport, tennis racquet is the most important thing. You cannot hesitate with this one. I’m really happy that I did this move.”

It’s one thing to love the racket in a pre-season trial but it’s another thing for the racket to adjust to a specific game style consistently on the tour week-in and week-out.

However that’s what has happened with Kasatkina and the Russian told reporters that it’s mainly to do with the spin that the racket produces, “Well, for me this racquet fits my game good because I’m spinning,” Kasatkina told the press.

“When I spinning the ball with this racquet, I felt like I can accelerate the ball more, ball was going with more power but the same or more control than before. This is the most important for me, to be able to feel that I can hit spin, I’m controlling the ball. This is exactly what I have. I’m happy with this way.”

Kasatkina’s happiness has translated into results with two WTA1000 semi-finals as she heads into Roland Garros with confidence, “Well, in January I liked how my tennis was. I think I was playing really good in Australia,” Kasatkina said when asked about her season so far.

“Then I had couple of not best weeks. Also getting COVID. Here and there was not the best. I a little bit went out of my shape. Was a tough, tough way to get back.

“Yeah, after Indian Wells, in Miami we start to work really a lot. I spend a lot of hours on the court playing, a lot of exercising with a thousand balls where I have to put a thousand balls inside the court. Was super tough, annoying, pain in the ass to make these practices.

“Then I realized that this one is something what I need to feel better on the court. I’m happy that I, together with Carlos and my team, we discovered this one.”

Kasatkina will now look to build on a new-found happiness and confidence at Roland Garros which starts on Sunday with the draw at 6:45pm local time.

Iga Swiatek leads the WTA rankings heading into Roland Garros after her latest win in Rome. 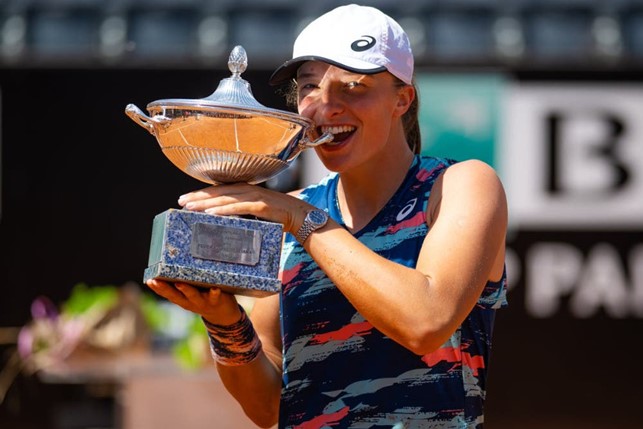 Unstoppable. Iga Swiatek wins her fourth WTA 1000 of the year, her fifth tournament in a row. Her winning streak rises to 28. After her triumph in Rome, she has extended the gap between herself and the other players to 2150 points. Neither Barbora Krejcikova, defending champion at Roland Garros, nor Badosa and Sakkari, who will be defending their quarterfinal and sem-ifinal of last year could bridge such a gap.

Yet, On the courts of the Bois de Boulogne there is much more at stake for Iga: if she weren’t to leave Paris with the Roland Garros crown, fans and pundits may cast some doubts upon the legitimacy of her leadership, conquered after Bartys’ shock retirement.

Unexpected. Who would have imagined Ons Jabeur could be so consistent? After winning the Mutua Madrid Open last week, she confirmed her worth and form at Rome. By reaching the final not only does she achieve her career best, but she is running for the top 5. Last year she reached the fourth round in Paris, but the players ahead of will be defending even more points than her: 2000 points Krejcikova, 430 Badosa, 780 Sakkari.

Leyla Fernandez moves up to No.2 of the Next Gen ranking, which includes only players born after 1st January 2002. She overtakes Coco Gauff, now No.3. Sixteen-year-old Victoria Jimenez Kasintseva from Andorra, semi-finalist at the ITF Tournament in La Bisbal D’Emporda enters the top 10.

The WTA Race is dominated by Iga Swiatek who has over twice as many points as the closest chaser, Ons Jabeur. Aryna Sabalenka gains 6 positions (No.11) and Daria Kasatkina gains 4 (No.15). Jil Teichman (+4, No.18) enters the top 20.

How has events at last week’s Italian Masters impacted on the standings? 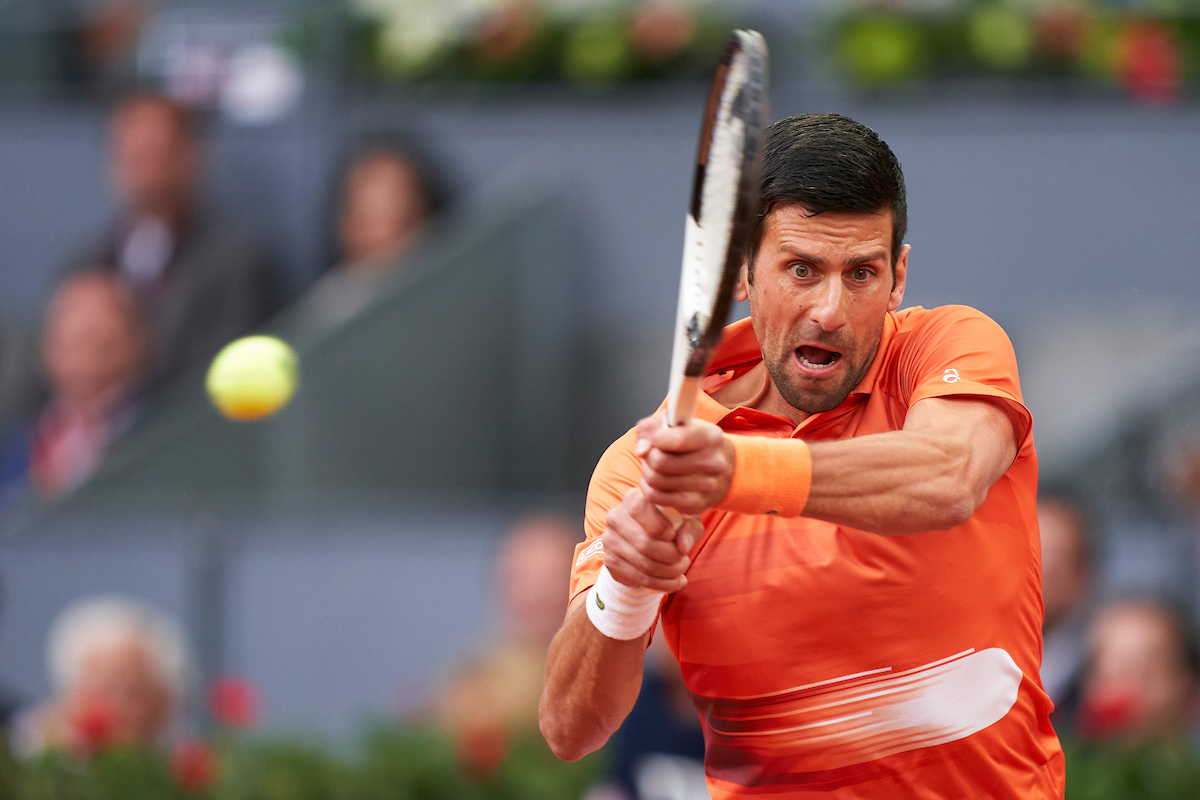 Thanks to his first final in Rome, Stefanos Tsitsipas overtakes Rafael Nadal; Casper Ruud is back in 8th place while Matteo Berrettini loses two positions and now is No. 10. The most striking news is that Novak Djokovic, while conquering his sixth crown in Rome, appeared close to his best tennis and has once more opened up quite a gap between himself and his chasers.

I came, I saw, I conquered.” Considering the geographic context, the Julius Ceasar quote seems most appropriate for commenting on Novak Djokovic’s triumph in Rome: thanks to the 1000 points earned in Rome, the world number 1 has whizzed up to 10th position in the ranking of the best players in 2022 with 1610 points.

Ahead of him (until when?) there are:

NEXT GEN RACE TO MILAN

No changes have occurred in the ranking of the best under 21s:

Eleven players in the top 100 reach their career best: