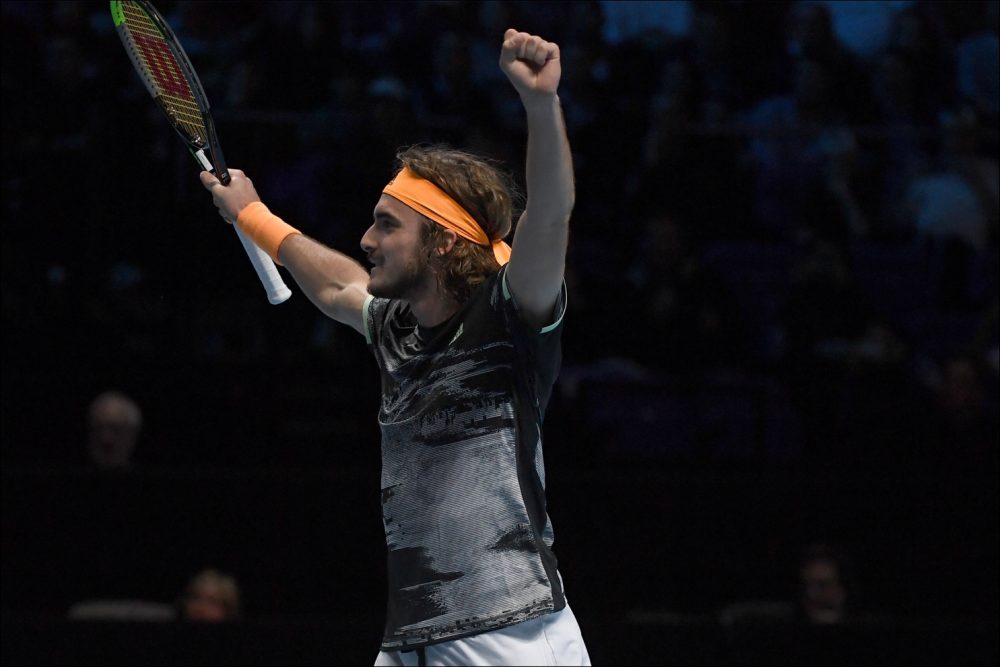 LONDON: Stefanos Tsitsipas has ensured that there will be no member of the Big Three in the finale of the ATP Finals after taming third seed Roger Federer in the semi-finals on Saturday.

Tsitsipas, who is 17 years younger than the 20-time grand slam champion, was relentless in his intensity he battled to a 6-3, 6-4, victory at The O2 Arena. Recording his second win over Federer this year after the Australian Open.

In his latest match, the Next Gen player impressively saved 11 out of the 12 break points he faced as he hit 18 winners. Meanwhile, Federer struggled behind his second serve as he won only 11 out of 24 points played. Bringing his season to an end.

“Wow, Jesus. I’m so proud of myself today.” Tsitsipas said during his on-court interview. “It was a great performance. Once again the people (crowd) were great and I really enjoyed my time on the court.”
“Sometimes with matches like this you always wonder how you can recover from all those break points down. It’s like a mental struggle, so I’m really proud that I was able to save so many break points today.” He added.

In previous meetings between the two, the serve has been detrimental to the outcome of the match. Since his loss to Tsitsipas at the Australian Open, Federer has gone on to defeat the Greek twice without dropping serve. Furthermore, this week in London both men have been impressive in that area of their games. Heading into the semi-finals, Tsitsipas has won 95% of his service games and Federer had won 90%.

It wasn’t long into their latest encounter when the usually reliable Federer service game buckled. In the second game of the match a failed smash from the Swiss Maestro, followed by a winning forehand from Tsitsipas gave the ATP debutant the early break. Tsitsipas’ breakthrough proved decisive to the outcome of the opener as his rival failed to convert a series of golden opportunities. Six times Federer had the chance to break, including two when the world No.6 was serving the set out. Continuing to prevail on the clutch moments, Tsitsipas sealed the 6-3 lead with the help of a 133 mph serve down the center of the court.

It looked as if the 21-year-old would eased his way to the surprise win as he once again capitalized on a lackluster service game from his opponent early in the second set. However, this time Federer finally found a way to break Tsitsipas’ brick wall defense to revive his chances.

Despite the temporary change in momentum, Tsitsipas continued to pounce like a lion. Forcing his rival to be continuously under pressure as he broke once again to restore his lead. There was little Federer could do to change the outcome as the Next Gen star roared his way to victory. Closing out the match with an ace out wide. Prompting him to drop his racket out of disbelief.

“I was trying not to give too much time to Roger.” He commented on his match tactics. “He was playing good and shout out to him as well. He played pretty good this week.”
“Playing him is the biggest honor I can have. Today’s victory is probably one of the best matches of my season.”

Tsitsipas will play either Alexander Zverev, who he defeated earlier in the week during the group stages, or Dominic Thiem. He has a negative head-to-head record against both of those players.

“I have no preference (of who I play).” He said. “I played Sasha in the groups. Obviously, anything can happen in the final. Sasha proved that to us last year in the finals. He was defeated by Novak and then went on to beat him. I just need to be super careful and have a good schedule ahead of my next match.”

Tsitsipas is the youngest player to reach the final of the tournament since Juan Marin del Potro back in 2009.