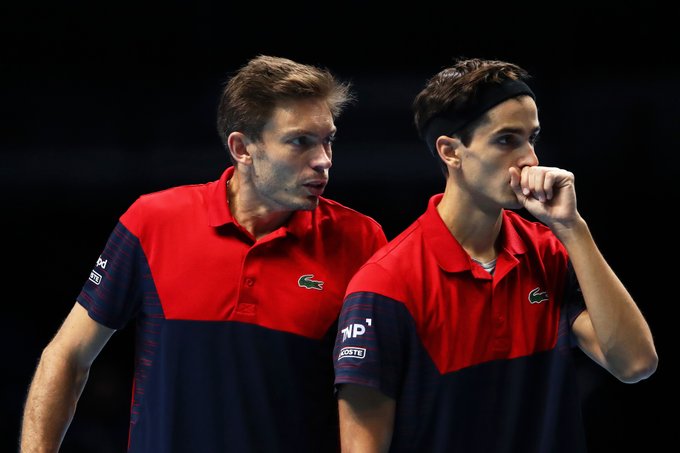 Pierre-Hughes Herbert and Nicolas Mahut began their bid for the ATP Finals crown with a 6-3 7-5 win over Juan Sebastian Cabal and Robert Farah.

The French duo proved too much for the Wimbledon and US Open champions as they won their first match of the ATP World Tour Finals.

They converted four of their 15 break point opportunities to seal their first victory of the tournament as they look for a third title of the season.

Next up for them is Kevin Krawietz and Andreas Mies, the Roland Garros champions while Cabal and Farah face Jean-Julien Rojer and Horia Tecau next.

Despite having a good head-to-head record against the top seeds, the French duo fell an early break down as the Colombians produced some powerful doubles play.

However the winner of five ATP titles this year couldn’t take advantage of the early break as they failed to counter-attack Herbert and Mahut’s flamboyant style of play.

The pick of the stylish shots was a Nicolas Mahut lob as some good returning sealed five games in a row for the duo have already won the career grand slam.

Although some better tactical serving helped the top seeds, it wasn’t enough as they lost the opening set in 34 minutes.

There was some better play from the Colombians, who were willed on by some ‘home’ support during the match as some powerful returning opened up a 3-1 lead.

But just like the opening set, the 7th seeds gained the break back after some nervy points from the back of the court from the Colombians.

Better serving was what Cabal and Farah needed but their return game wasn’t nearly as good unlike their opponents today.

Herbert had entered a hot-streak towards the end of the match as some great placement had put the Australian Open champions on the brink of victory.

It was Herbert who served the match out at 6-5 as they kicked off their campaign with a win as Cabal and Farah tactically disappointed on serve.

After the match, Herbert was relieved to end the match victorious, “It was a great match for us,” the Frenchman told atptour.com.

“It was a high-level match from both sides and we knew we needed to be good against the No. 1 team. We’re so happy with the level we played. To come through this first match is something special for us.”

Next for them on Wednesday is Roland Garros champions Krawietz and Mies after they defeated former champions Rojer and Tecau 7-6(3) 4-6 10-5.

The Germans won 78% of their first service points as they score an impressive win in what has been an impressive season for them.

As for Rojer and Tecau, they will look to bounce back in their next match when they take on Cabal and Farah on Wednesday.

‘Why Don’t You Like Him?’ – Stefanos Tsitsipas Quizzed Over Rivalry With Fellow Player