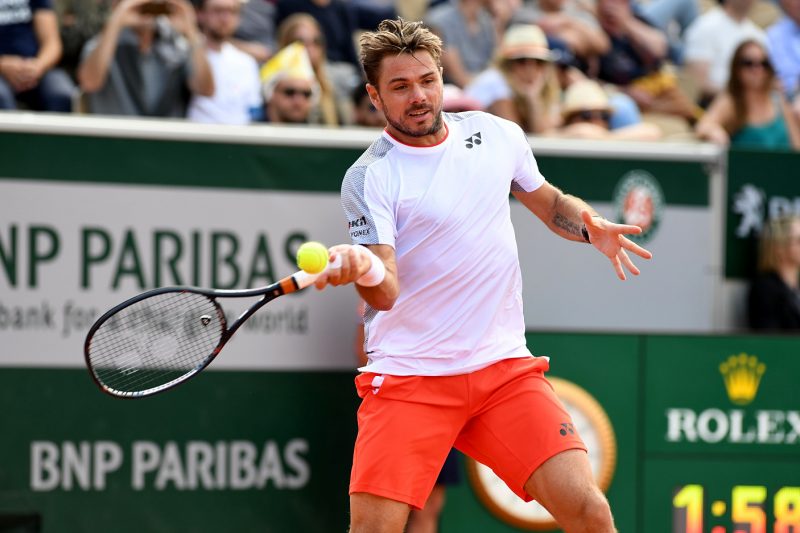 Stan Wawrinka and Daniil Medvedev will be among eight players who will travel to Saudi Arabia in December to play in the country’s first ever tennis tournament.

The inaugural Diriyah Tennis Cup will take place over three days between December 12-14. It will be held on the outskirts of Diriyah at the same venue where the boxing world heavyweight title rematch between Anthony Joshua and Andy Ruiz Jr will take place a week prior. The venue has a capacity of 15,000 spectators with players battling it out for a prize of $3 million.

“Hosting world class international tennis in Saudi Arabia for the very first time is another watershed moment for the Kingdom. There’s a deep passion for sport in Saudi Arabia and the Diriyah Tennis Cup will see us reaching new tennis fans, welcome even more international visitors as well as creating amazing memories for all.” Prince Abdulaziz bin Turki AlFaisal Al Saud, chairman of the General Sports Authority of Saudi Arabia (GSA), said in a statement.

Prince Abdulaziz is hoping the event will help inspire people in Saudi Arabia to take up the sport. The country currently doesn’t have a player, male or female, with a professional ranking in tennis. The event will be working alongside the Saudi Tennis Federation.

“We want to contribute in achieving the goals of the sports sector, which have been defined in the Kingdom’s Vision 2030, to transform the Kingdom into a destination for sports tourists from around the world.” He said.
“We hope that the announcement of the tennis cup would motivate Saudi players to invest more in the game so that they could compete at international levels in the future.”

Also confirmed for the event are Italy’s Fabio Fognini and David Goffin. Fognini won his first Masters title earlier this year in Monte Carlo and Goffin is currently ranked 14th in the world.

The announcement comes just days after the conservative country changed the rules to their visas for tourists. Renowned for its strict laws, unmarried couples are now allowed to rent hotel rooms together and women can stay alone.

In 2018, Rafael Nadal and Novak Djokovic were due to clash in the Kingdom before their exhibition was called off. The decision was made in the aftermath of the death of journalist Jamal Khashoggi, who was murdered inside the Saudi Arabian embassy in Turkey. Both players were also criticised for agreeing to play in the country that has a questionable human rights record.

The full line-up for the Diriyah Tennis Cup will be announced shortly.

Less than a month after achieving his best ever result in a Grand Slam, the 21-year-old is ‘not happy’ with his form at the moment as he tries to get the spark back.

Australia’s top player says he needs to take a ‘long hard look in the mirror’ after crashing out in the first round of the French Open.

Alex de Minaur, who was the 25th seed in the men’s draw, fell in straight sets to Italian qualifier and former semi-finalist Marco Cecchinato. The loss continues his lacklustre record at Roland Garros where he has only won one match in four appearances. Although the Australian admits that he is at a loss following his most recent defeat at the clay court major.

“I’m going through probably this rough patch, and everyone has it, but at the moment it’s what I’m dealing with,” he said.
“I’m not happy with where I am, not happy with what I’m showing on court. So it’s a little bit demoralizing in itself that I can’t come out and play the tennis that I want to and that I know I can.”

The mood of the 21-year-old is a stark contrast to that of a couple weeks ago at the US Open. In New York de Minaur achieved a new milestone in his career after reaching the quarter-finals of a Grand Slam for the first time in his career before getting knocked out by Dominic Thiem. The person who went on to win the men’s title.

It is the mental part of his game that de Minaur says he is struggling with the most. Echoing similar comments from David Goffin following his loss to Jannik Sinner in Paris. For the world No.27 he believes the only way to get out of his slump is to win matches. De Minaur also lost in the first round of the Italian Open to Germany’s Dominik Koepfer prior to Roland Garros.

“I’m not one to make excuses. At the end of the day, I just didn’t perform the way I wanted to. I’ve had two matches where I missed out on countless opportunities. And I believe that is what I needed to gain some confidence and some momentum,” De Minaur reflected on his current form.
“It’s a pity because a sport like tennis is very based on results, everything. Mentally, it’s a lot based on results. So you can do all the right things and be training well, be feeling physically fit, feeling mentally well, but if you go into a match and you’re not getting those results, then it almost feels like nothing of that counts.”

It is unclear as to what the next move for De Minaur will be as he refuses to rule out the possibility of taking a short break from tennis ahead of the new season. He has now lost in the first round in three out of his four most recent tournaments since the Tour restarted back in August.

“It’s bizarre because I’m basically coming off my career best in a Grand Slam. So obviously there are a lot of things that I need to just clear my head out and almost just maybe not putting as much pressure on myself, that’s probably one of the things,” he said.
“I don’t know what I’m going to do but hopefully whatever I decide to do, it will help me out and I can get back to where I want to be.”

As de Minaur exits France, his conqueror Cecchinato will play Argentina’s Juan Ignacio Londero in the second round.

The German tennis star weighs up his chances of glory at Roland Garros.

Playing in his first match since narrowly missing out on his maiden Grand Slam trophy Alexander Zverev returned back to winning ways on Sunday evening at the French Open.

Zverev, who is seeded sixth in this year’s draw, recovered from a 2-5 deficit to defeat Austria’s Dennis Novak 7-5, 6-2, 6-4 Court Philippe Chatrier, whose roof remained open despite it drizzling with rain. The match was a test for Zverev due to a number of reasons. Not only did he have to contend with the cold and breezy conditions, it was his first competitive match on the clay and his first since losing to Dominic Thiem in the US Open final 14 days ago.

“Conditions are obviously very different than the US Open. First of all, we play on a different surface. Then we play in very cold temperatures,” Zverev told reporters.
“I’m happy to get through because Dennis is somebody that plays well on this surface. He can beat good players.”

A lot has changed for Zverev when it comes to playing in the majors since his last Roland Garros appearance. This year he has already reached the semi-finals of the Australian Open, as well as the final in New York. A big turnaround for a player who was once criticised for not shining when it comes to playing in the major tournaments. Although the French Open is still the only Grand Slam where he has reached the quarter-finals twice.

“I’m probably the third-best player this year when it comes to slam results after Novak and after Dominic,” he said.
“I obviously do want to win one, win more than one. I was two points away on multiple occasions in New York. That obviously was very upsetting, and in a way frustrating, but at the same time I know how close I’ve gotten. I had one hand on the trophy, but I do believe that I can win them now. “

The question is will Roland Garros be the place where he will win his first major title? When asked what he did between the US Open and now to address any issues with his second serve, the witty German played down any negatively by replying ‘I was on a boat doing nothing at all. Then I came here (Paris) to practice.’

Jokes aside Zverev is becoming a more prominent contender for the biggest titles of the sport. Although he admits that doing so at the French Open this year will be hard work for him.

“Obviously it’s not going to be the easiest slam for me with how the conditions are, with how the preparation was for me. But we’ll see how it goes now, the French Open and the following years to come, as well,” he stated.

Up next for Zverev will be a second round meeting with either France’s Pierre-Hugues Herbert or American qualifier Michael Mmoh.

Marco Cecchinato reaches the second round at Roland Garros 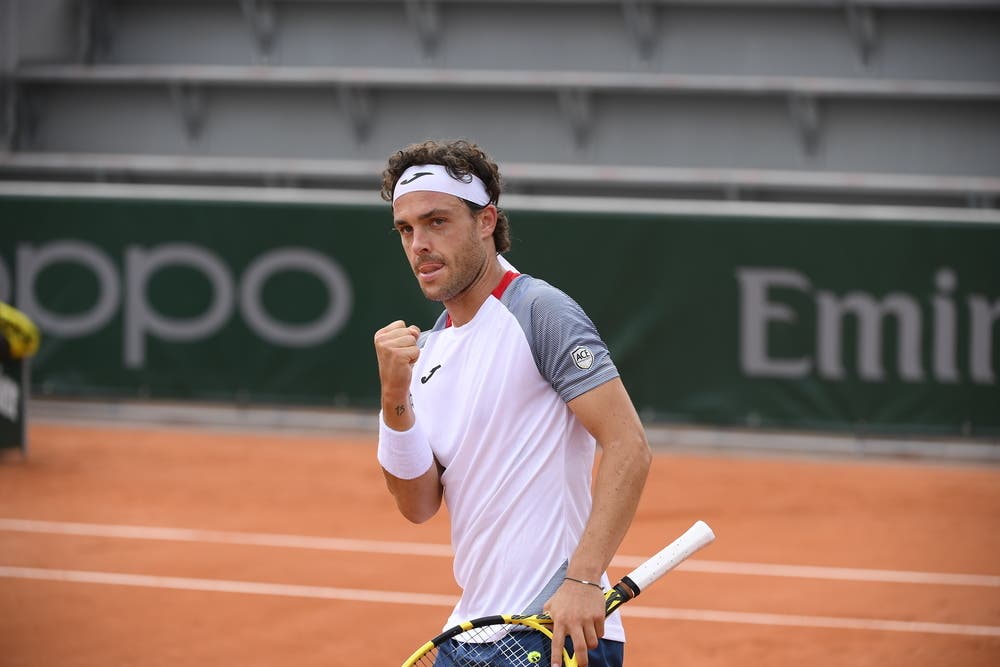 Cecchinato broke three times in a row to take a bagel win in the third set.

Cecchinato will face the winner of the all-Argentine clash between Federico Delbonis and Juan Ignacio Londero.

Evans broke three times in the first, fifth and seventh games to win the first set 6-1. Nishikori won the second set by the same scoreline with three consecutive breaks.

Nishikori took a 5-2 lead in the third set with a break in the second set. The Japanese player wasted two set points. Evans won four consecutive games with two breaks in the 9th and 11th games to take a 6-5 lead. Nishikori broke straight back in the 12th game to force the set to the tie-break. Nishikori won the tie-break 7-3. Evans broke twice in the second and sixth games to win the fourth set 6-1.

Nishikori broke in the second game to build up a 3-0 lead in the fifth set. Evans broke back in the fifth game. Both players went on serve until the 10th game, where Nishikori converted his second break point from 40-30 down to claim the fifth set 6-4.

“I think I was rushing too much in the first set. With his slice, I think I was trying to hit the winner too early. I was little more patient in the second set onwards. Things start working well for me, because in the first set I was rushing too much and I did not feel well. It was raining heavily. I started playing better. There were many ups and downs, but I think I managed well in the end”, said Nishikori.