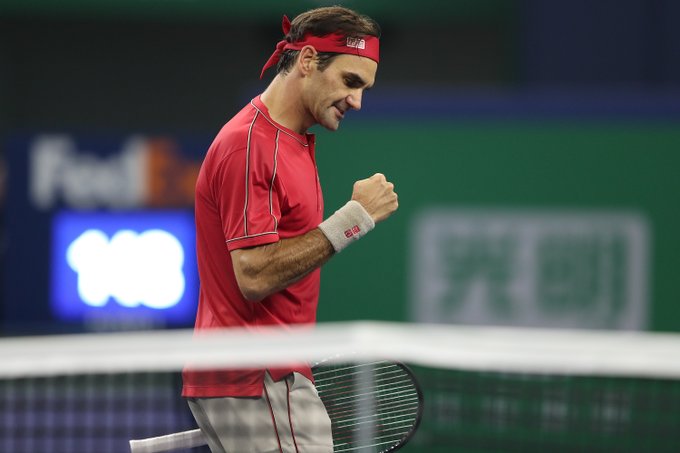 World No.3 Roger Federer has extended his unbeaten run at the Swiss Indoors to 24 matches in a row after seeing off Australian Next Gen star Alex de minaur in the final on Sunday.

Federer, who made his Basel debut four months before his opponent was born back in 1998, was in clinical form throughout his 6-2, 6-2, victory. Winning 72% of his service points without facing a single break point.

“I think I played a great match. It was a tough opener in the beginning during the first five games we had some great rallies and I sort of never looked back.” Federer told TennisTV.
“I was great on the offensive, made very few unforced errors and came up with the big shots and serving when I had to.”

The clash between the two was a battle between old and young. 20-time grand slam champion Federer was contesting his 157th final on the ATP Tour at the age of 38. To put that into perspective, 20-year-old de Minaur has only won 45 matches on the ATP Tour so far in his career. Despite the disparity between the two, Federer was tested at times throughout his latest match at the 9000 capacity St. Jakobshalle Arena.

The Swiss top seed first struck four games into the final as he worked his way to a 40-0 advantage on his rivals serve. Two break points came and went, thanks to some stern play from de Minaur before Federer sealed the 3-1 lead with a smash at the net. In the lead, he eased his way through the opener. A loose forehand from the underdog gifted Federer a duo of set points before he sealed the 6-2 advantage at the expense of another error from across the court.

Continuing to pounce, the home favourite dismantled the de Minaur serve. Firing a forehand passing shot to break immediately at the start of the second set. Moving seemingly effortlessly around the court, Federer rallied his way to a game away from victory. Overcoming some spirited play from De Minaur. Closing in on his latest Basel trophy, the final concluded with another de Minaur unforced error.

“What a moment for me to win my tenth title here in Basel.” Said Federer.
“I couldn’t be more happy. I feel very good, very fresh. What a great tournament it has been for me. It always has been, but particularly the last few times I’ve been here I have always been in finals and always won.” He added.

There are also positives to draw for de Minaur, was played in only his second ATP 500 final after Washington last year. He is also only the second Australian player to contest a Basel final after Mark Philippoussis back in 1997.

“For me it has been a dream come true to play Roger in Basel. I don’t think it gets much bigger than that.” He said during the trophy presentation.

Sunday’s victory rewards Federer the La Decima in Basel. A term that refers to an athlete winning something for a 10th time that was made famous by Real Madrid’s hunt for their 10th European Cup. It is his most successful tournament in terms of titles won alongside Halle. He now has a win-loss record of 75-9 in Basel with his last loss being to Juan Martin del Potro in the 2013 final.

Federer has become the fifth player in 2019 to win a fourth title on the Tour. Following in the footsteps of Novak Djokovic, Daniil Medvedev, Rafael Nadal and Dominic Thiem. Overall, he has 103 trophies to his name. The second highest in history.

Despite his age, Federer has already insisted that he ‘will try’ and return to Basel in 2020. Saying with confidence ‘I’m looking ahead. It is good times right now.’ He is the oldest ATP Champion since Ken Rosewall, who won the 1977 Hong Kong Open at the age of 43.