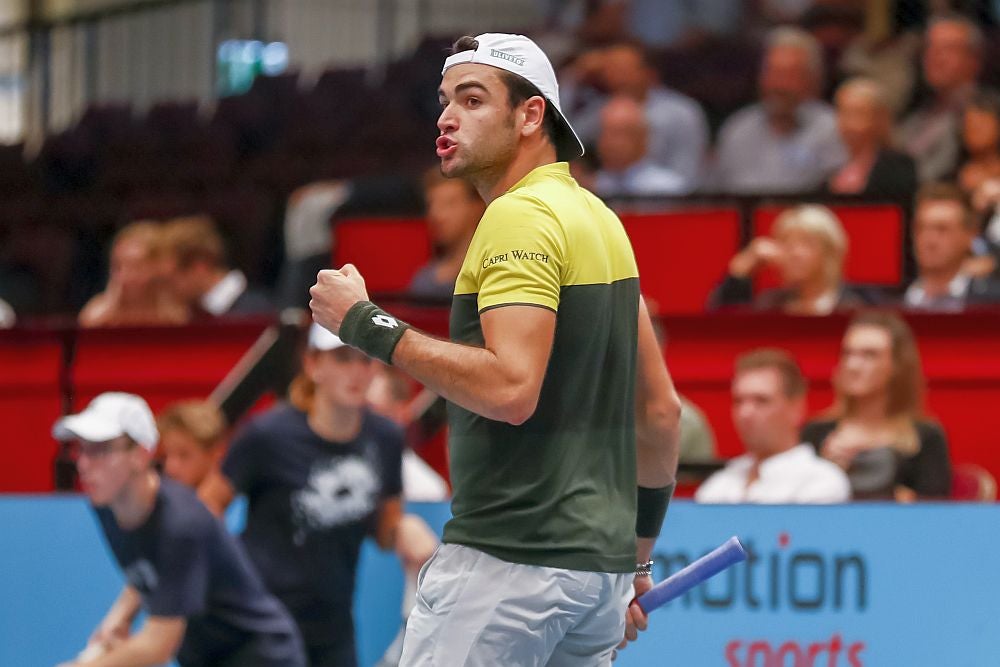 This year’s US Open semifinalist Matteo Berrettini came back from one set down to beat Kyle Edmund 3-6 6-3 6-4 after 2 hours and 6 minutes in the opening round of the Erste Bank Open ATP 500 Tournament in Vienna. With this win Berrettini boosts his chances of qualifying for the ATP Finals in London for the first time in his career. Berrettini is currently ranked eighth in the ATP Race to London and will need good results in Vienna and Paris to secure his spot in the ATP Finals.

Berrettini hit 10 aces and saved four of the five break points he faced during the match on his debut in Vienna.

Edmund converted his second break point chance in the fourth game to open up a 3-1 lead. Berrettini turned his right ankle at the start of the seventh game, as he chased a forehand. Edmund held his serve at love to take a 4-3. Berrettini earned a break-back point at 30-40 in the ninth game, but Edmund saved it to hold his serve and closed out the opening set 6-3.

Berrettini faced the danger of going down a set and a break, but he saved three break points in the first game of the second set to hold his serve at deuce for 1-0. The Italian player won another service game at deuce to take a 2-1 lead. He won 12 of the next 15 points from 3-3 including a break in the eighth game to take a 5-3 lead and served out the second set at 15 forcing the match to the decider.

Edmund saved two break points in the third game of the decider, but Berrettini converted his third break point chance to take a 2-1 lead. Berrettini held his serve at love in the fourth game at love to open up a 3-1 lead. The world number 11 player never looked back holding his next service games to wrap up the third set 6-4 on his first match point.

Berrettini will face Bulgaria’s Grigor Dimitrov, who beat Damir Dzuhur 6-3 7-5. The Bulgarian player has claimed the 300th win of his career.

Dimitrov went up a double break in the second and sixth game to race out to a 5-1 lead. Dzumhur pulled one break back on his second opportunty in the seventh game and held his service game after saving a break point in the eighth game. Dimitrov closed out the first set on his second set point.

Both players traded breaks in the first two games of the second set. Dimitrov broke for the second time at love in the fifth game to take a 3-2 lead. Dzumhur converted his third break back point chance in the eighth game to draw level to 4-4. Dimitrov earned his thid break at deuce in the 11th game and served out at 30 on his first match point.

“I think it was one of those matches that I had to go through. I was very determined in my own game to find that rhythm. I still believe that I could have done a few things better. I think it was great to be able to come through in straight sets. I think the thing that I was most happy with is definitely my composure and the way I kept on going throughout the whole match”,said Dimitrov.

Diego Schwartzman defeated Pierre Hugues Herbert 6-4 6-4 after 1 hour and 47 minutes setting up a second round match against either last week’s Moscow finalist Adrian Mannarino or US Sam Querrey.