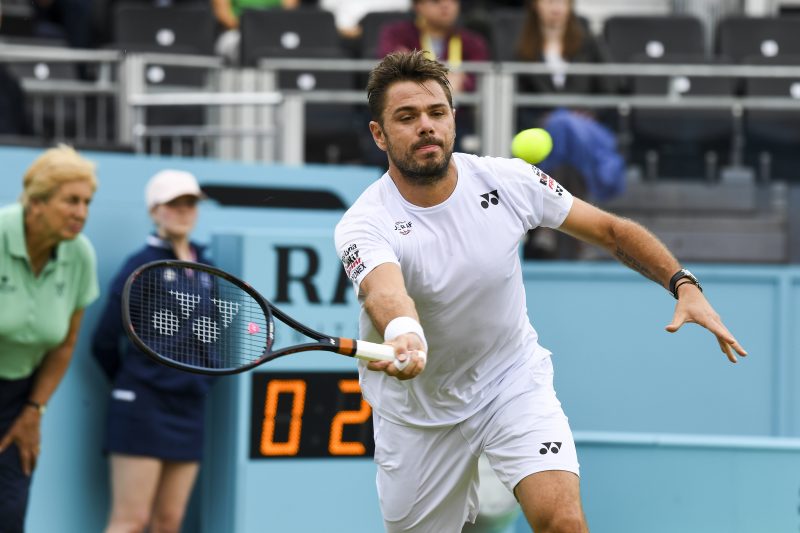 Stanislas Wawrinka of Switzerland is pictured in action during day three of ATP Fever-Tree Championships tennis tournament at Queen's Club in west London on June 19, 2019.

Three-time grand slam champion Stan Wawrinka has launched an attack on the media in his home country by saying he no longer enjoys talking with them.

Wawrinka shared his frustration earlier this week at the Swiss Indoors following his first round win over Pablo Cuevas. On two consecutive days he was asked about whether or not he can return back to his best form. Wawrinka has been blighted by injury in recent years and underwent knee surgery back in 2017. However, this season the Swiss player has been gradually regaining his form and has reached two ATP Finals this season.

“There is an impression here, in this room and in Switzerland, that I have not had a good year.” Wawrinka said during a press conference.
“I am exaggerating, but I have that feeling and, frankly, I have lost the joy of talking to the media in Switzerland. I’m 15th in the race, could theoretically qualify for the ATP finals. And you ask me: what are you missing to find your best level again?’
“Who won Grand Slam tournaments in the last few years? I’m the only one outside Big Four who has won three. This must not be forgotten.”

Continuing his response, the 34-year-old cites a duo of his 2019 milestones as reasons why others shouldn’t be critical of his performance. At present, he has won 31 out of 50 matches played this season, according to data provided by the ITF. Four of those wins have been over top 10 players Kei Nishikori (twice), Stefanos Tsitsipas and Djokovic.

“I’ve come back from a serious injury, I’m 15th in the race, was injured a month after the US Open and have just reached a final (in Antwerp). And I’m one of the few who beat Novak (Djokovic), even though he had to give up in the third set (at the US Open). And you ask me what’s missing to win a Grand Slam title again?” He argues.
“Everything I did this year makes it a very good year. I have regained my confidence, have beaten the very best again at certain times. Sure, I did not win any Grand Slam tournaments, but who won them (Nadal and Djokovic). I’m back in a position where I know what I will be capable of next year. And that was my goal for 2019. Would I like to finish in the Top 10 this year? Yes. Would I like to win a Grand Slam title? Yes. But you also have to be a realist.”

In a direct jibe at reporters, Wawrinka said he believes they have been ‘too spoiled’ by the success of the Swiss contingent. Which also includes 20-time grand slam champion Roger Federer and Belinda Bencic. He argues that his year would have been appreciated more by the media if it was during another era where his compatriots hasn’t been as successful in the sport.

This week Wawrinka is 17th in the ATP rankings in what is his highest position since May 2018. It has been 29 months since his last won an ATP trophy at the 2017 Geneva Open. Despite the dry spell, he believes he still has what it takes to challenge for the biggest trophies in the sport.

“Who knows, maybe I’ll win a Grand Slam title next year? My career has always been in stages. I know where I stand now. I continue to play to win titles and beat the best. I had an incredible career and won almost everything that is possible for a tennis player. I would not have much interest in continuing to play if I could not continue to win tournaments.”

Wawrinka was scheduled to play Federer in the quarter-finals of the Swiss Indoors. However, he has been forced to pull out of the match due to a back injury. Federer will play either third seed Tsitsipas or Filip Krajinović in the last four on Saturday.

Teenage Star Felix Auger-Aliassime Out Of Next Gen Finals

Rafael Nadal Speaks Out For The First Time Since Wedding