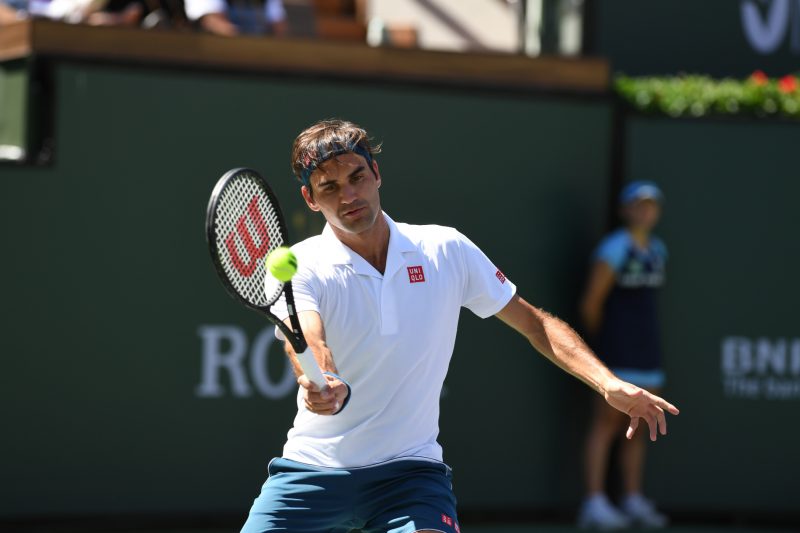 This year in Basel the competition is at its top, with two spots yet to be reserved in the race to the ATP Nitto Finals.

Roger Federer, who could make a 13th final in Basel this year, will commence his campaign against qualifier Peter Gojowczyk in the first quarter. In the second round the 20-time grand slam champion could play either Radu Albot or Dusan Lajovic, whom he has a clean head-to-head profile against.

Meanwhile European Open finalist, who just lost to comeback kid Andy Murray in Antwerp, Stan Wawrinka is facing the Uruguayan Pablo Cuevas in the first round. Should he take off with a win, he would face either Frances Tiafoe or Daniel Evans before he could set a clash with last year’s Basel champion in quarter-finals.

Generally it could be theoretically an easy contest for Federer, who has a H2H profile of 23 wins to three loses against Wawrinka with 17 of them on hard-courts. However Wawrinka is in good form after making his second final of the year last week after Rotterdam in February.

The second quarter sees one player who has guaranteed his debut at the ATP Nitto Finals. Greece’s Stefanos Tsitsipas regained some of his good tennis during the Asian Swing where he ousted the World No.1 Novak Djokovic in Shanghai to reserve a place at the ATP Nitto Finals. Tsitsipas is taking on Spain’s Albert Ramos-Vinolas in the first round. Only one meeting has taken place between the two on the ATP Tour in Barcelona last year with the Greek winning it. Then he could play either qualifier Lithuanian Ricardas Berankis or Pablo Andujar in the second round.

However, there is another player in this quarter, who is still trying to make it to the ATP Nitto Finals. Fabio Fognini had a disappointment last week when he lost in his first match in Stockholm after making the quarter-finals in Shanghai before losing to Daniil Medvedev. The Italian is starting against  Alexei Popyrin then he could face either Laslo Djere or Filip Krajinovic, who made it the final in Stockholm before losing to Shapovalov. Fognini is in the 11th position in the race to London, going after countryman Matteo Berrettini, 8th position, with a gap of 290 points.

Should a quarter-final between Tsitsipas and Fognini occur, the Greek leads in their previous confrontations 2-0.

Spain’s Roberto Bautista Agut is in the third quarter. He has been in bad form these past couple months, but is only 40 points behind Berrettini in the race to London. Should the Spaniard want to make his debut at the O2 Arena this year, he has to be pretty much on form as he opens against Marius Copil. Who showed a very good form in Antwerp last week and possess a big serve that could be an obstacle to a lot of players. The winner of that match will face either the Frenchman Richard Gasquet or Argentine Juan Ignacio Londero in the second round.

Still in the third quarter, another player is in the run for a spot at the ATP Nitto Finals with 90 points behind the Italian Matteo Berrettini. It’s David Goffin, who is taking off in Basel against former US Open champion Marin Cilic in what could be a thrilling match, but the Croatian isn’t in good form recently. Goffin would face either the big serving Reilly Opelka or Chile’s Cristian Garin in the second round, should he get past Cilic.

Second seed Alexander Zverev takes on Taylor Fritz in the opening round in what could be a tricky match in the fourth quarter. Zverev, who has had a very tough season this year and recorded his first top-10 win just days ago in Shanghai against Federer, has gained in momentum  significantly after his participation in Laver Cup a few weeks ago. He is now in the 7th position in the race to the O2 Arena after reaching the final in Shanghai, which he lost to Medvedev in straight sets. He has either Alex De Minaur or Hugo Dellien in the second round with possibly Benoit Paire or Germany’s Struff in the quarter-final.

The Frenchman Benoit Paire is opening against the wild card holder Henri Laaksonen, should he cruise to the second round, he would face either Jan-Lennard Struff or Miomir Kecmanovic. 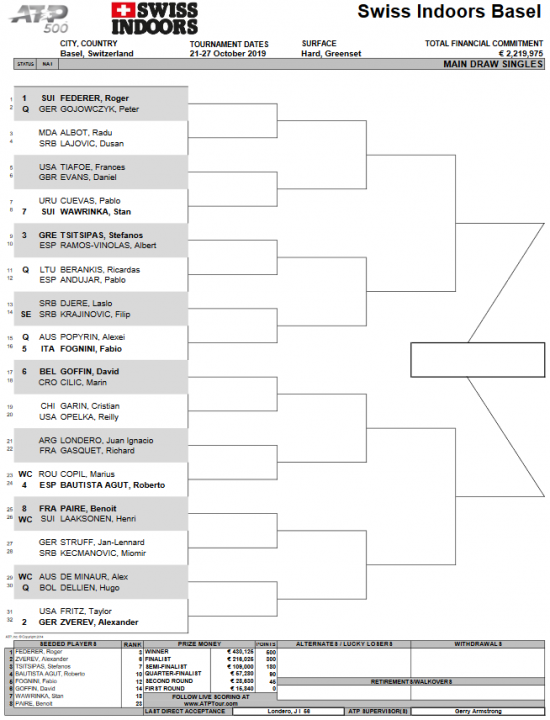 Related Topics:ATP BaselRoger Federer
Up Next