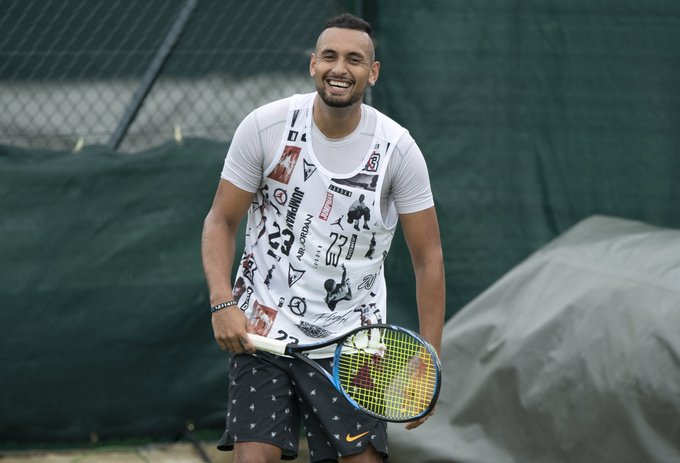 Nick Kyrgios has suggested that he hasn’t been suspended from the ATP Tour due to his ability to attract crowds to events in response to comments made by Pat Rafter.

The Australian world No.27 is currently under investigation for a series of incidents he committed during the summer. At the Cincinnati Masters he was fined $113,000 for eight violations committed during his match against Russia’s Karen Khachanov. Ranging from unsportsmanlike conduct to walking off the court without permission. Then at the US Open Kyrgios accused the ATP of being ‘corrupt’ before clarifying his statement 24 hours later. Arguing that there are double standards in the game when it comes to some players.

Following those events, the ATP released a statement confirming an investigation. Looking into whether or not Kyrgios breached the Player Major Offence section of the code and if any further action is required. Although there has been no mention of a suspension or any further action since. Something former world No.1 Rafter has openly questioned.

“I don’t understand why it hasn’t happened,” he said during the launch of the ATP Cup.
“There is obviously something else going on behind the scenes. I don’t know.
“On paper it looks like he should be suspended, to me.”

Rafter, who is a two-time US Open champion, admits that his compatriot is a big attraction in men’s tennis despite his behaviour. Although he insisted that Kyrgios’ popularity shouldn’t stop him from being punished if necessary.

“But at what stage do you say the crowd is more important? Or are you trying to uphold a certain standard or protocol for players to adhere to.” He stated.

Kyrgios has responded to the comments by taking aim at Rafter. In a Twitter post, he accused him of trying to ‘stay relevant.’ The 24-year-old also claims that Rafter is known for criticising other Australian players.

“Everywhere I play the stadiums are sold out, and the event makes money with me around? Not surprised rafter has commented on this topic, guy loves hanging fellow aussies out to dry. Enjoy staying relevant champ.” He wrote on Twitter.

New York Times journalist Christopher Clarey has reported that a final decision regarding a possible suspension will likely be made after the Laver Cup. The team tournament is officially part of the ATP calendar, but technically not the same framework. So if a player was banned from the tour, they could still technically play in the Laver Cup anyway.

Kyrgios will play in the Laver Cup later this week.