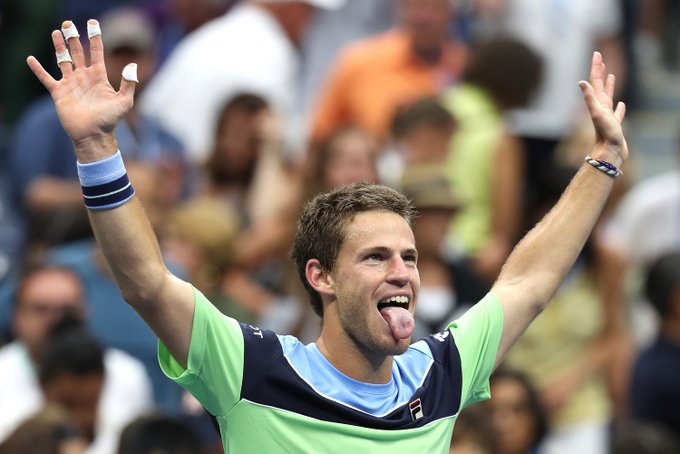 World No.21 Diego Schwartzman has achieved one of the biggest wins of his career after knocking Alexander Zverev out of the US Open.

The 27-year-old tamed and frustrated the sixth seed throughout his 3-6, 6-2, 6-4, 6-3, triumph at Flushing Meadows. Monday’s clash was a cat and mouse chase between the two with Zverev having numerous break opportunities early on, but he failed to capitalise on those chances. Illustrated by his 65 unforced errors that included 17 double faults. Meanwhile, Schwartzman was also guilty of making mistakes, but proved to be the more solid when it came to the clutch moments of the match.

“I think Alex had many problems with his serve today. Being a big returner, I think I took many chances with that.” Schwartzman said during his on-court interview.
“I think I played great tennis.” He added.

In typical Zverev fashion, his encounter at the New York major was far from straightforward. So far in his career, the German has managed to win back-to-back matches in straight sets at two out of 18 grand slam tournaments. Taking on 20th seed Schwartzman, there was no exception to that trend.

After fighting his way through a turbulent first set where he claimed five games in a row after going down a break, Zverev’s hot and cold play cost him dearly in the second. The inconsistency of Zverev’s play enabled the Argentinian to bounce back with ease. After saving four break points whilst leading 3-2, Schwartzman went on to break in the following game. He then levelled the match at one set all with the help of a lacklustre Zverev service game, which ended with three consecutive unforced errors.

With little to separate both players on the Arthur Ashe Stadium, a single point could prove decisive to the outcome of the match. Schwartzman, who spent more than four hours less on the Court than Zverev heading into the match, refused to go away. Hitting a series of blistering forehand shots to force Zverev on the defensive from the baseline continuously. Exchanging breaks midway through the third set, the Argentine struck at the most crucial moment. A double fault from the German elevated him to a duo of opportunities to lead the match for the first time. He failed to convert his first, but made no mistake on the second time asking. Hitting a backhand down the line after another lengthy rally between the two.

“It was tough because I was feeling that I had the chance to win the match. I had a few break points and couldn’t win them.” Schwartzman commented about the third set. “I recovered really quickly and felt great after that. It was a really big change in the match.”

On the verge of achieving one of his biggest career win in terms of ranking, the 5’7” player roared towards the finish line as Zverev continued to crumble. At one point it got too much for Zverev, who fired a ball in the direction of his team in the crowd. Prompting him to be slammed with a code violation. His mood deteriorated further when he was slammed with a point penalty after committing a second offence for a verbal obscenity. Resulting in Schwartzman moving to a game from victory.

Serving in a place in the last eight, another Zverev mistake granted Schwartzman two match points. He triumphed with his second after hitting a clear cross-court forehand winner.

“Thanks everyone. I don’t know what it is happening here (inside the Arthur Ashe stadium) but I feel like I’m at home.” He said.
“It was great to play with this crowd with me all the time. It helped me a lot in every important moment.”

Schwartzman is through to his third grand slam quarter-final and second at Flushing Meadows after 2017. In the next round he will face either Rafael Nadal or Marin Cilic.

“The next round could be Rafa. He’s my friend, he’s great and a big opponent. It is always great to play against him in the quarter-finals of a grand slam. I’m going to enjoy (the match).” Schwartzman previewed.”

Schwartzman is yet to defeat Nadal on the tour. However, he has achieved two wins over Cilic, including their meeting at the US Open two years ago.