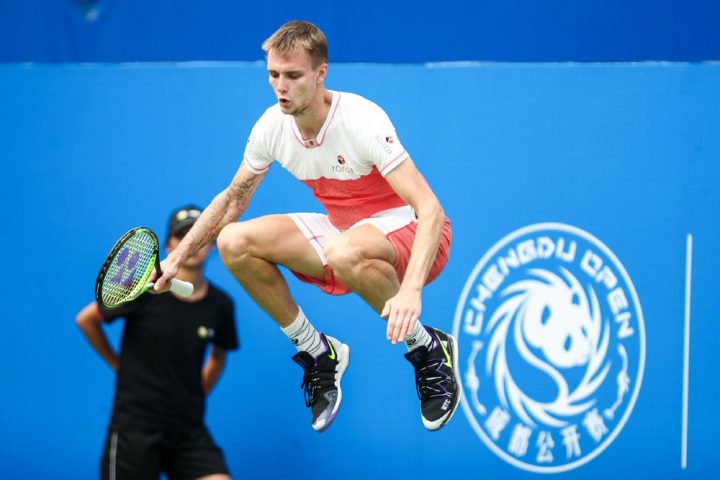 Alexander Bublik versus Pablo Carreno Busta, flair and power versus consistency. This will be the final for of the fourth Chengdu Open. Bublik earned the spot in his second final of the year (after losing to John Isner at Newport last July) defeating the emerging South African Lloyd Harris 7-6, 6-4 in one hour, 25 minutes. This result means a new best ranking for the 22-year-old Kazakh player, who will edge closer to the top-50 next Monday at n.57, a 120-spot climb for him since the beginning of the year.

Carreno Busta returns to an ATP Finals after a two-and-a-half-year hiatus, since his last final dates back to the Estoril Open in April 2017. The Spaniard disposed of Canadian Denis Shapovalov by 6-3, 6-4, taking advantage of his inability to limit the unforced errors in key moments of the match. Shapovalov has failed another opportunity to reach his first ATP final, and he’s now 0-7 in semifinals at the ATP level.

BUBLIK-HARRIS – The two heavy-hitting servers were the first to take the court in Chengdu on Saturday for their semifinal match. It was Bublik who took the early lead in the first set, breaking his opponent to lead 4-2, but he could not close the set when serving at 5-4 and he ended up winning the set by 8-6 in the tie-break.

The second set was decided by just one break in the ninth game that allowed Bublik to serve out the match and celebrate his second ATP final in career.

CARRENO BUSTA-SHAPOVALOV – The second semifinal was the main course of Saturday’s schedule, with Carreno Busta being a former Top-10 player and Shapovalov one of the most exciting newcomers in the game. The Canadian gave the crowd what they were looking for right from the start, with one of his trademark “jump backhand” winners during the first game. But Carreno Busta was not distracted by the Canadian’s flashy shots and with a break in the sixth game, he secured himself the needed advantage to win the first set.

The second set was almost a carbon-copy replica of the previous one: Shapovalov looked comfortable while holding his service game but a fatal distraction at 3-3 cost him the deciding break. Another missed opportunity for Shapovalov, whose tendency to drop his level of attention at crucial moments in the match is starting to curb his ambitions to break into the Top-20.