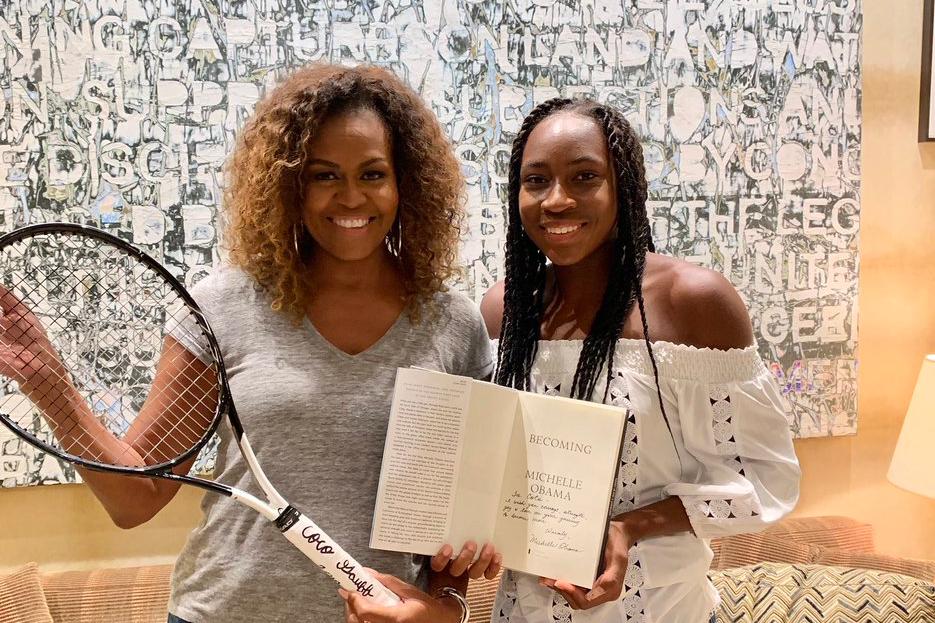 Last week will be forever in the memory of 15-year-old Coco Gauff. Not only did she win her maiden WTA title in the doubles alongside Catherine McNally, she got to speak to one of her idols.

Last Thursday the teenager took some time away from the Citi Open in Washington to meet Michelle Obama. The former first lady of the United States of America. During the Wimbledon Championships, Gauff said she was ‘super excited’ when Obama mentioned her in a tweet. At the grand slam, the American became the youngest ever player to come through qualifying before reaching the fourth round. Losing to eventual champion Simona Halep.

“She’s one of my role models,” Gauff said of Obama at The All England Club. “So it was just cool to see that she knows I exist.”

The two exchanged gifts during their first face-to-face meeting last Thursday. Gauff handed the former first lady a signed racket. In return, she received a signed copy of Obama’s first book. The two reportedly spoke about dealing with being in the media spotlight, as well as other things. After they spoke, Obama described the teenager as ‘a wonderful young woman who’s showing us that we don’t have to wait to see what the next generation can do.’

“I got to meet my idol @michelleobama,” wrote Gauff on Instagram. “Her words and wisdom on my journey will stay with me on the court over the course of my career. She is a true inspiration. I have never arrived, I am always becoming! Thank you for your time.”

The rising star was also given some valuable advice. During an interview with news website Think Progress, Gauff said she received tips on how to cope with a surge in her popularity and the subsequent demand by the media.

Gauff is currently ranked 142nd in the world and has become one of the most sought after tennis players despite her young age. She already has endorsement deals with companies such as Barilla, Head and New Balance. Earlier this year Forbes Magazine estimates the value of those contracts to be worth in the range of $1 million.

Managed by Team8, which is a company co-founded by Roger Federer, the hype surrounding Gauff is showing no signs of easing off. Ahead of the US Open she will play world No.1 Ash Barty in an exhibition match in Winston-Salem. There is also speculation that Gauff will be given a US Open wild card despite the WTA’s age eligibility rule that limits how many tournaments young players can play in order to prevent early burnout.

The exhibition match between Gauff and Barty will take place on August 21st.