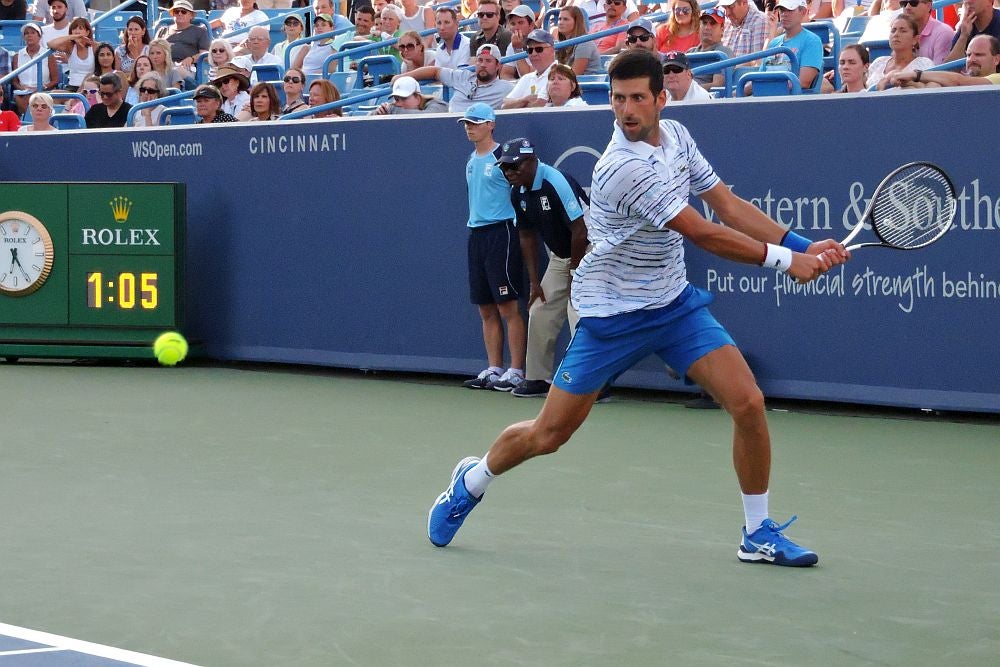 16-time grand slam champion Novak Djokovic believes Karen Khachanov will be ‘in the mix’ of players with a chance of winning the upcoming US Open after suffering a shock loss to the Russian on Saturday.

The world No.1 crashed out of the Western and Southern Open to the very much inform Medvedev, who prevailed 3-6, 6-3, 6-3, in their semi-final clash. The world No.8, who also defeated Djokovic earlier this year in Monte Carlo, prevailed with the help of some blistering serving. Firing 16 aces past his opponent as he won 78% of his first serve. In total Medvedev produced 37 winners to 21 unforced errors.

“I thought I played a really good match. Yes, maybe in those games, especially in the third set when I was broken, at 1-All I could have done a little bit better, but when someone serves 128-miles-per-hour second serve and doesn’t make too many doubles faults and goes for every shot, you just have to put your hat down and congratulate him.” Djokovic said following the match.
“He played amazing tennis from 4-3 in the second set. Not much that I could really do. I tried to return his serve. And when I had my racquet on the ball I was also returning his serves, but you can’t really predict someone or prepare yourself for someone serving that big second serve consistently from 4-3 to the end of the match with making maybe two double faults out of God knows how many serves.”

Despite the difference in ranking and achievements on the tour between the two players, Djokovic’s loss is by no means a disaster. Since Wimbledon Medvedev has become one of the most successful players on the ATP Tour. Winning 13 out of 15 matches played. Cincinnati is the third consecutive tournament where he has reached the final after Washington and the US Open. The last man to reach three finals within three weeks was Alexander Zverev in 2018.

“He certainly improved since Australian Open this year. His forehand is better. His movement is better.” – Djokovic on Medvedev

Giving the rapid surge in form by the 23-year-old, some are starting to talk up his chances of causing a stir in the upcoming US Open. Medvedev is yet to progress beyond the fourth round at a grand slam, but that could change soon. He has already won 43 matches this season, which is more than anybody else on the ATP Tour.

“He deserves to be in the mix, certainly, with all his results. He’s working his way to top 5 of the world. He’s definitely one of the best players in the world at this moment.” Djokovic analysed.
“He deserves to be in the contention for the championship in New York. But again, it’s best of five. It’s two weeks. It’s Grand Slam. It’s a different environment, different experience.’
“It just takes I think, than just your game. I think it takes patience and ability to know how to deal with all the off-court things, the importance of a slam.”

Djokovic will now switch his focus to Flushing Meadows, where he will be seeking to defend the title he won 12 months ago. Meanwhile, Medvedev has a clash with David Goffin awaiting him on Sunday. Goffin downed France’s Richard Gasquet 6-3, 6-4, in his semi-final match.

The upcoming final will be the third meeting between the two players in 2019. Medvedev was triumphant at the Australian Open before losing in five sets to Goffin at Wimbledon. Whoever wins on Sunday will claim their first Masters 1000 title. Becoming the ninth person to do so in the last 21 events.

Intriguing Team-Ups Lure Eyes Doubles’ Way. Will They Stay For The Problems, Too?