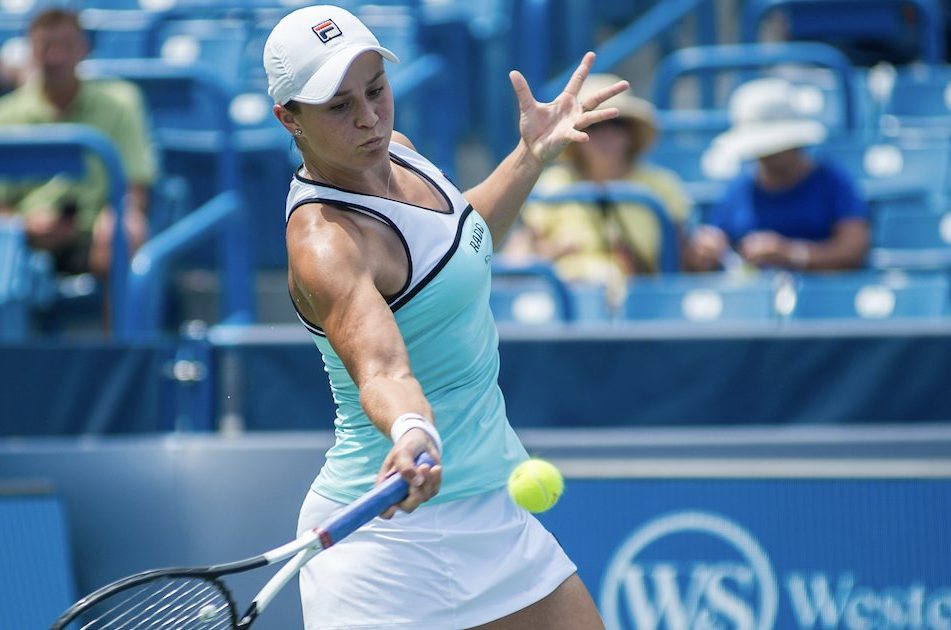 This year’s Roland Garros champion Ashleigh Barty cruised past Maria Sharapova 6-4 6-1 after 1 hour and 27 minutes in her opening match at the Western and Southern Open in Cincinnati.

Barty lost in the opening round to Sofia Kenin at the Rogers Cup in Toronto in her first match since Wimbledon and dropped from the world number 1 spot.

Barty rallied from a break down in the first set and cruised through to a straight set win after 1 hour and 27 minutes.

Sharapova fended off two break points in the second game and took a 2-1 lead when Barty made a double fault in the third game. Barty broke back in the sixth game after a forehand error from Sharapova to draw level to 3-3.

Barty broke serve after a loose forehand from Sharapova in the ninth game and served out the first set 6-4 after 45 minutes.

Barty held serve at love in the first game of the second game and broke serve with a forehand crosscourt winner in the second game. The Australian player fended off four break points in a marathon third game to race out to a 3-0 lead.

Barty hit a lob winner to claim another break, as he was returning at 4-1 and saved a break point in the sixth game when Sharapova netted a backhand before closing out the match with a service winner.

The young Aussie player scored her second win over her Russian rival this year. Last January Barty came back from one set down in her 4-6 6-1 6-4 win to reach the quarter final at the Australian Open.

“It was certainly no panic sessions after last week. I knew I was a little bit underdone going into Toronto and certainly had no worries or concerns there. I feel like I have been striking the ball really well over the last seven or eight days. I found my groove a little bit more. It was just going out there trying to execute playing against one of the best competitors in the world and making sure I had to be there present and ready for every single point”, said Barty.

Simona Halep battled past Ekaterina Alexandrova 3-6 7-5 6-4 after 2 hours and 2 minutes. Alexandrova saved four break points in the fourth game before breaking serve at love in the next game with a backhand down the line. Alexandrova broke again for the second time to close out the first set 6-2. The Russian player went up a break to take a 2-0 lead. Halep broke back in the next game and rallied from 4-5 down by winning 12 of the next 14 points to seal the second set 7-5. Both players traded breaks in the fifth and sixth games of the third set. Halep reeled off 12 of the final 15 points from 3-4 to win the third set 6-4.

Elina Svitolina cruised past Elise Mertens 6-4 6-1 in 71 minutes to score her third win in four head-to-head matches against the Belgian player. The Ukrainian player converted four of her eight break points and saved two break points she faced. Svitolina sealed the first set with a break in the fifth game of the first set and never faced a break point. She broke three times in a row to close out the second ste 6-1.

Sofia Kenin saved all five break points and earned four break points to claim a 6-4 6-1 win over Zarina Diyas. Kenin reeled off nine of the ten points from 3-4 down to clinch the win.

Donna Vekic edged past Victoria Azarenka 6-2 7-5 after 1 hour and 23 minutes. Azarenka rallied from 6-2 4-2 down to keep pace with Vekic. The Croatian player reeled off 12 of the next 16 points to reach the round of 16.

Anett Kontaveit edged past Polish teenager Iga Swiatek 6-4 7-6 (7-2). The Estonian player earned a late break in the first set and fought back from 3-5 down before clinching the tie-break 7-2.

Former US Open champion Sloane Stephens came back from one set down to beat Yulia Putintseva 2-6 6-4 6-3 after 2 hours and 7 minutes. Putintseva went up a break to take a 2-1 lead, but Stephens broke twice in the fourth and sixth games to take a 4-2 lead. Putintseva broke straight back in the seventh game, but Stephens broke for the third time in the eighth game and sealed the win on her first match point.