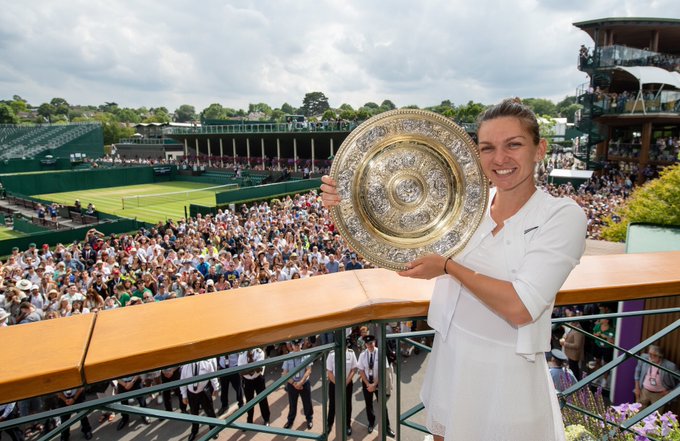 Simona Halep was awarded the, national order of the ‘star of Romania’ in the rank of knight, on Tuesday after winning Wimbledon.

The Romanian has had quite a whirlwind few weeks since thrashing Serena Williams to claim her second grand slam title at Wimbledon.

After ceremonies and parades, Halep has now received the star of Romania as tribute to her magnificent achievement.

It was awarded to her by President Klaus Iohannis on Tuesday as a reward for her effort and attitude, “We have in front of us a great champion, who has offered Romanians not only moments of joy, but also an invaluable example,” The president said on Tuesday.

“Dear Simona Halep, today I award you the highest distinction of the Romanian state, in sign of recognition and deep appreciation for winning the prestigious Wimbledon trophy, as well as for your exceptional career path so far.

“In just 55 minutes, you have written an important page in the history of Romanian tennis, at Wimbledon. Thanks to your talent, passion, determination, perseverance and constant training, you have succeeded in becoming the first Romanian tennis player to hold this title.

“Through the passion and dedication she is putting in tennis, she inspires millions of people from all corners of the world. Moreover, she is reaching the children’s hearts in a particular way, sowing the seeds of trust and courage in them. By the power of your example, you represent a highly precious role model for the young generation.”

After continuing to break boundaries for Romanian sport, Halep said that the award was more emotional than the Wimbledon final, “It is a great honour for me, a recognition and appreciation of my work,” Halep explained.

“I hope I will be able to inspire all the children through these results, to instil the desire and pleasure to practise this sport in them.

“I want to thank them for having built my career. Each brick was very important, this is why I reached the highest level of tennis. I thank the Romanians everywhere, who support me unconditionally regardless of the country where I play, and especially for the positive energy I receive when I return home.

“I am proud to be a Romanian and I hope to keep mu head up everywhere I go and win as many trophies as possible, in order to be an inspiration for all the children, to have as many champions as possible in the future.”

This must be an incredible feeling for Halep to represent her country as well as she has done and to be rewarded for it in the best possible manner.

Now Halep will look to continue to inspire the next generation of players as she returns to the tour next week in Toronto for the Rogers Cup.

The world number four is the defending champion and has reached the final in Canada in three of the last four years as she prepares for the US Open next month.

Gauff Bounced in Opening Round in Washington