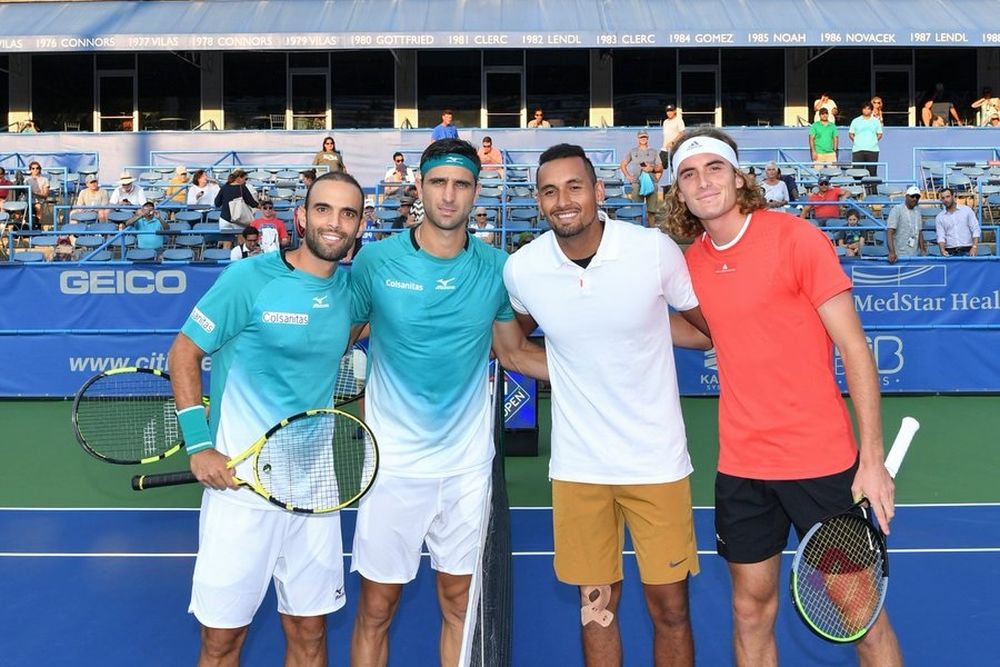 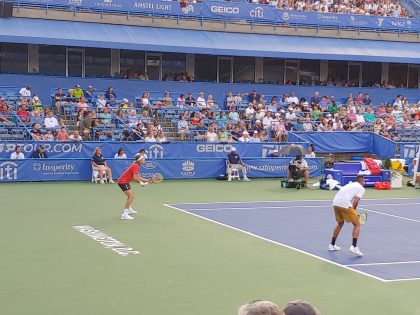 The much anticipated Nick Kyrgios Stefanos Tsitsipas doubles partnership on Monday night at the Citi Open lasted just 66 minutes but the crowd who watched were likely entertained.

On Stadium Court on Monday night, the Australian-Greek pairing lost their opening round match to the No. 1 seeds and recent Wimbledon Doubles champions Juan Sebastien Cabal and Robert Farrah 6-3, 3-6, 10-5 in Washington.

Two of tennis’ biggest stars, got off to a rocky start in their partnership getting broken in their first service game. But as the match went on, the duo began to find their groove entertaining the fans along the way. Some big serves from Kyrgios (two clocked at 133mph) along with solid net play from both teams which including an amazing slice volley with optimum angle from Farah brought the crowd to their feet. The best point though, came in the second set when “Kyrgipas” as some have called them, were up 5-3. Kyrgios, who has one doubles title in his career, hit his second baseline tweener of the match and then saved the point returning an overhead deep in the backcourt. Tsitsipas did his part with a nice put away volley which propelled them to the point and the game at love.

However, the top seeds were just too good in the 10-point tiebreak. Cabal and Farah continued to serve well forcing their opponents into several return mistakes. Kyrgios frustrated after a backhand return into the net, broke his racquet in disgust down 9-4. Two points later it was over and the top seeds were moving on.

” It was actually much better than I thought it would be to be honest”, said Tsitsipas. “It was fun, I enjoyed it. We enjoyed playing together.”

“I really enjoyed playing with Stef,” said Kyrgios ranked No. 52 in the World entering this week. “He is one of the best players in the world right now. It was a lot of fun, I’d love to play again.”

“I got inspired to play with you today, honestly I won’t lie,” the World No. 6 said looking directly to Kyrgios. “The serve, they didn’t know what to do, I wish I could serve like this, it’s unbelievable to see in a human being.”

The compliments continued. “He’s probably better in every aspect of the game. He’s an amazing player,” explained Kyrgios. “Hopefully he doesn’t make the same mistakes I have. Keeps his head down and he can do some special things.”

When pressed as to when “Kyrgipas” could potentially play again, the idea of Cincinnati in a couple of weeks came up as a possibility. Tsitsipas then suggested Beijing, which Kyrgios joked he wasn’t too keen on.

Note: Kyrgios has played with eight different partners in 11 Doubles events 2019. Only Taylor Fritz has played more than once with the Aussie this season.